A Buddhist Leader's Thoughts On Conservation

New York, USA -- Although the fundamental tenets of many religions may have some bearing on conservation activities, the relationship between spiritualism and environmentalism is perhaps most obvious in the case of Buddhism. 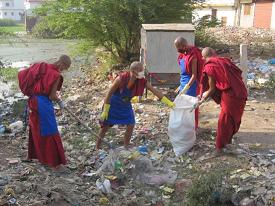 The close ties between Buddhism and conservation-mindedness were recently described by His Holiness the 17th Gyalwang Karmapa, Ogyen Trinley Dorje, in an essay published in the 25th anniversary edition of Conservation Biology. The Karmapa is the head of the Karma Kagyu school of Tibetan Buddhism, and is regarded by his millions of followers as the 17th incarnation in a 900-year old lineage. In addition to his role as spiritual leader, the Karmapa is also an environmental activist.

He traces his "love for nature and dedication to protect the environment" to being asked, as a child, to plant a sapling at the source of a spring that was drying up during a drought. Even then, he writes, he was "considered an unusual child," whose "daily joy consisted of exploring the nearby mountains" and seeing wild animals at close range. The growth of the sapling marked the sprouting of his interest in preserving the wilderness.

The Karmapa writes that Buddhism, with its emphasis on diversity and the connectedness of animate and inanimate beings as two parts of one whole, is closely related to the environmental movement. The "essence of Buddhism," he says, "lies in the union of compassion and emptiness." "Compassion," in this case, is an understanding that each person benefits from the "hopes, dreams, and labor" of people we often never meet--those who grow our food, make our clothes, purify our water, and so on. It is the understanding that no one thing exists by itself alone, or can survive alone. "Emptiness," on the other hand, is a lack of "self-nature."

The self is "empty," writes the Karmapa, because it is impermanent and intangible--"constantly moving, absorbing, and shedding." Rather, the self--whatever it feels and accomplishes--is part of a larger entity, a conglomeration of all phenomena everywhere.

According to Buddhism, ignorance of the "empty nature of the self," together with rejection of compassion, cause us to be egotistical; this, in turn, has led us to degrade the environment. In fact, we and the things that are most closely related to us are not any more valuable than anything else, the Karmapa writes. When we view the world as "me" and "other than me," we are denying a fundamental relationship to the Earth--a "shortsightedness" that "blinds us to the relation between our activities and their longer-term consequences."

Although conservation and sustainability have especially poignant meanings in a religion that incorporates ideas of reincarnation, the Karmapa writes that this is not the only reason that Buddhism goes hand in hand with environmentalism. He equates conservation with the human rights movement. Not only did the latter cause a "revolution in our thinking" that reconfigured many societies within the space of just a single century, but it also arose from individual people who believed that they could make an example of themselves for everyone to follow.

These Buddhist ideals - viewing all as equals and "being the change you wish to see" (to quote Gandhi) apply to wildlife and natural ecosystems as well as to humans.

The Karmapa advocates making connections between conservation challenges--deforestation, climate change, overharvesting--and individual choices made on a daily basis. If we see environmental issues as stemming from the multitude of activities that we engage in each day, we are more likely to feel that we can control them. His Holiness hopes that people can "accept that we are not isolated individuals but instead one whole made up of all life on Earth." This should prevent "[indifference] to the suffering and ills that occur here."

However, he also acknowledges that this is not easy; most of us have other important decisions to make and worries to face on a daily basis, leaving us little time and energy to address issues that do not necessarily seem immediately pressing or important.

The Karmapa believes that our major goal should be "[empowering] everybody to protect the environment. This can be achieved by "[breaking] through barriers and [building] bridges"--a sentiment echoed in many of the essays in Conservation Biology's anniversary issue. Working together, perhaps we can minimize our energy intake, learn to live more simply and with less waste, and "reassess what we mean by success"--perhaps shifting emphasis from personal affluence and economic development to other values "such as sharing, compassion, and peace."

These goals, the Karmapa points out, are consistent with all major religions, which share the same founding principals: living simply, acting compassionately, and treating each other with kindness. No religion says that we should destroy the Earth, and, in fact, many religions include messages about the importance of stewardship of nature. The Karmapa has been trying not only to talk the talk, but also to walk the walk. In 2009, he founded KHORYUG (the Tibetan word for "environment"), a network of Tibetan Buddhist monasteries and nunneries that are focused on preserving the Himalayas. He considers these environmental efforts an "evolution" from "enlightened aspiration" to "enlightened activity"--a worthy progression not only for devout Buddhists, but for us all.