The Karmapa Wishes for Peace and Harmony in the New Year

Dharamshala, India -- In an address the 17th Karmapa, officially known as His Holiness the 17th Karmapa, Ogyen Trinley Dorje, made to the media regarding the end of the current year and the fast approaching new year, he stated that he wishes we live this year with mutual love and respect for one another and for the earth that is our common home. 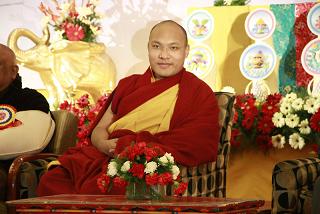 Referring to the popular belief that the world might end in 2012, he said "In fact, we never know what any given year might hold. But if we are sincerely committed to following a path of compassion and wisdom, this uncertainty about the future need not cause us any concern.

Whatever happens, we can simply keep our focus directed steadily at what matters most-cultivating compassion and equanimity, and acting to benefit others.""If we harbor this attitude in our hearts, we can make anything that occurs positive for ourselves and for others," he added.
Speaking of the numerous natural diasters that struck the planet this year, he offered his prayers to all those who suffered turmoil this year.

He concluded by stating that he offers his prayers to all those connected with him in any way during this year and to those who will connect in the coming future.

"May you find lasting happiness and peace. May all of us who share this planet go forward together into the new year in harmony," he concluded.