Ultimate Source of Inner-peace Is Warmheartedness; His Holiness

Bodhgaya, India -- Humanity needs more warmheartedness. This was the message of the spiritual leader of Tibet, His Holiness the 14th Dalai Lama to thousands of Buddhist devotees from all over the world at the conclusion of his teachings at Bodhgaya, Bihar state of India, where he was conferring the 32nd Kalachakra initiation for world peace over the past ten days. 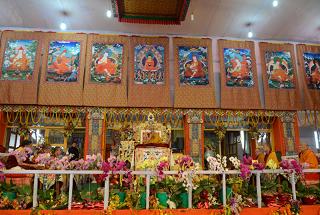 An individual, a family, a community and the whole of humanity need more warmheartedness and more of a consideration for the well-being of others. Through that our world becomes a very warm, peaceful. "The ultimate source of inner peace is Warmheartedness," said the the Tibetan Nobel peace laureate, His Holiness the Dalai Lama. His Holiness also told the the crowd of thousand devotees at Bodhgaya that a long term happiness, joyfulness must come through inner peace and compassion.

"Calm-mind entirely based on compassion, when you have sense of concern over other human beings, you will get happiness everywhere, if you keep suspicious and distrust, then you will feel insecure everywhere, therefore, the ultimate source of inner-peace is warmheartedness," said His Holiness.

"Now according to scientists' point of view, people who are more warmhearted, less stress, also more cam and much happier, physical health is much better," said His Holiness. Anger, fear, hatred are bad for our health, actually sometimes to say , the fear and anger are eating our immune system," he added.

The Buddhist leader successfully finished his 32nd Kalachakra initiation for world peace in Bodhgaya Tuesday. During the last ten days, over 200,000 people were attended the Buddhist teachings including, including 20,000 monks and nuns, and more than 50,000 devotees from Himalayan regions, over 8000 Tibetan pilgrims from within Tibet and 1000 Chinese nationals from mainland China.

For the first time in Bodgaya city, where Gautam Buddha is believed to have attained enlightenment, His Holiness' teachings of Kalachakra for peace were streamed live on the web-TV and thousand others watched the teachings and over 300 journalists from all over world covered the events.

His Holiness concluded the final day of teachings by finishing the 32nd Kalachakra initiation including giving Tara's empowerment and long life prayer. He then led the Buddhist followers through the Bodhisattva vows and encouraged people to repeat the vow as part of their daily practice.