New York, USA -- Western Buddhists, taking Asian Buddhism and attempting to shape a modern Buddhism from it, have different challenges and opportunities. For instance, for better or worse, we do not have strong norms to guide the relations of the sexes as in Buddhist countries. Sadly, we must even beware of the sexual abuse of power by Buddhist teachers. 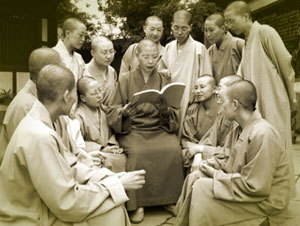 This is not a new problem; one of the most serious offences described in the monastic code is to “praise sexual intercourse (with a monk) as the highest means of making merit”. But in the normless West, it is a more serious problem, as illustrated by the events at the San Francisco Zen Center in 1983. Students of the (married) Zen Roshi, Richard Baker, discovered that he had been sleeping with some of his meditation students and asked him to resign.

Subsequently, an editor of the women-in-Zen journal Kahawai, based in Hawaii, revealed that she had evidence of 10 Buddhist teachers in the West who had caused psychological harm to students whom they had, had secret sexual affairs with. (Interestingly, she comments that the Tantric Buddhist groups, who have made a doctrine of the notion that “sexual intercourse with a guru is the highest means to the achieving of enlightenment”, are the least damaging, since teacher-student sex is openly acknowledged; see Coevolution Quarterly Winter, ‘83, and spring ‘84. Also, it is important to point out that lay affairs with the clergy are a run-of-the-mill scandal in Asian Buddhism, and in all other religions for that matter, while firing your Zen master is quite uncommon; SFZC is to be commended on their maturity in holding to the Dharma as their sole refuge.)

More subtly, Buddhists must examine the whole way in which Buddhism is taught, for the male bias that has crept in after 2500 years. When dharma is taught in the West, egolessness, humility and renunciation are frequently emphasized, ignoring the dynamic side of the path. It is quite appropriate to address the problems of careerist, ego-centered, goal-oriented males by emphasizing “go with the flow”, but women have already been programmed into humble, nurturant, passive roles. Teaching women what is ordinarily understood as “egolessness” is redundant. Rather dharma-teaching to women must emphasize warriorship, the dynamic empowerment that comes when we let go of hesitation, doubt, and fear, the neurotic self.

(At Enkakuji in 1304, when the Master gave his approval    to the nun Shido, the head monk challenged her understanding.)    She faced him and drew out a ten-inch knife (carried by all    samurai women) and held it up: “Certainly a teacher of the    line of the patriarch should go upon the high seat and    speak on the book. But I am a woman of the warrior line    and I should declare our teaching when face-to-face with    a drawn sword. What book should I need?”    (Ling, 1976)

In the Sigalovada Sutta, society was seen as a set of dyadic hierarchical role-relationships, each with a responsibility to the other. Though this liberal paternalism was historically progressive for women (and workers) in 500 B.C., it is rather outdated today. In the 21st century we can foresee a society of individuals free of the restrictions taken for granted before, with responsibilities to themselves, their community and all living beings, but not to superiors or inferiors. We must do to the structure of social hierarchy what the “perfect wisdom” schools did to the orthodox dualism of samsara and nirvana, pure and impure; see their deep interpenetration and equality and build our practice on that basis. For instance, if Western Buddhists preserve the institution of marriage it will be quite different from before.

In an interview before John Lennon was assassinated he discussed the years he had sacrificed his career to stay at home raising his son. He commented that being a mother was so limiting, so demanding a discipline that it was “like living in a Zen monastery”; he only found it possible because of his deep commitment to feminism (via Yoko Ono). Like this we can suggest that motherhood can be an excellent path for the practice of self-sacrifice, patience, and attentive love when embarked on by choice, with enough resources and some free time. In fact, it’s such a good discipline that mothers and fathers should share it equally.

Beyond simply democratizing family responsibilities, Buddhists today may find alternatives to celibacy and marriage, the two “appropriate” lifestyles of previous Buddhism. Marriage in Buddhism, after all, is not a sacrament, nor can monks (or nuns) act as match-makers for courting couples, or participate in marriage ceremonies. While previous societies tended toward the celibate-householder dualism as the most stable arrangement, birth control, industrialization, education’ and other changes in the means of reproduction have opened up the possibilities for spiritual paths. Today fully sexual people can approximate the monastic’s independence from children and family, and even from commitment. Western Buddhist communities are experimenting with many sexual lifestyles and living arrangements; in some, women are freed for meditation and study by cooperatively shared cooking, housekeeping, childcare and income-generation.

The possibilities of appropriate lifestyle, on a woman’s path today in the West are only limited by her personality, karma or stage of life. For some women mothering may be right, for others monastic celibacy, for others single sexuality, and yet others lesbian women-centered lives.

What is it to be a woman, and yet not be determined by gender? What does it mean for women to be liberated? Even if we completely eradicate the cultural construct of “womanhood” and create a society where men and women share everything equally, what of all the other oppressions and limiting conditions?

Buddhism and feminism in the West both arose as responses to the politics of the 1960’s that didn’t go far enough in effecting our moment-to-moment experience, in creating a “personal politics”. The new social movements destroyed the sterile dogma of the primacy of the class contradiction, yet a new model has not yet arisen to integrate the increasingly diverse liberation movements. I suspect that Buddhism can contribute to unlocking an integrative “politics of consciousness” based on the interdependence of spiritual and social liberation. Any one movement does not necessarily encompass another (women won’t necessarily liberated by a workers’ state, nor whales by gay rights), and thus they must remain autonomous. Yet they must also be linked into a stronger synergetic network based on the new emerging paradigm. Suffusing the diverse social movements with this new integrated paradigm, while yet respecting their autonomy seems the ideal task for the detached and open-systemed Buddhist; the Zen of Coalition-Building.

As in every movement against oppression, there is a danger of encouraging greed for the oppressor’s possessions or qualities, and objectifying the hated enemy. Perhaps the major contribution that Buddhism can make to feminism is a practice for working with “the rage-stage”, the period of radical and painful awakening to how thoroughly warped the accepted status-quo is. Rather than indulging in anger, living in a claustrophobic fantasy-world of upright Sisters and evil men, dharma-practice can help radical women develop a detached yet thorough clarity, an assumed equality that allows a great spaciousness and skillfulness in dealing with patriarchy.

Sitting meditation could be powerfully used by feminists not only to let go of anger and other emotional tangles but to tap into that fundamental experience of enlightened mind which is the only thing beyond socialized experience. Both Buddhism and feminism begin with experience beyond preconception, name and form, searching for the unconditioned “true self” through personal examination in a supportive group. By looking very closely at our minds we see through the habitual patterns that make up the unsatisfying fiction we call “I”.

In this sense, Buddhism is more developed than feminism. Yet within the feminist communities there are parallels to monastic awareness disciplines. In the States}“‘being “PC” or “politically correct” involves a whole code of behavior for body, speech and mind. Rather than robes, various uniforms are worn which create a more simple, less time-consumingly “feminine” appearance. Rather than a shaved head, short hair; little or no makeup. Like the strictly moral, the feminist is strict and mindful in her sexual relationships, with men or women, but guarding against sex-stereotyped behavior rather than carnality. Lesbians, as women who have made a radical break with the whole game of Mara/Patriarchy, are given the special status and mythic aura that surrounds renunciates, celibates and androgynes in every culture; and some lesbians also share the puritanical moroseness and misanthropy that plagues renunciates.

Rather than a code of pleasant speech, the feminist’s spiritual development can be seen in whether she automatically uses neutral pronouns, and says “chairperson” instead of “chairman”. (Small behaviors can indicate important things to the trained eye; just as the Zen Master can size a student up without speaking a word, a sensitized feminist can usually tell another from speech and behavior.) Instead of a clear awareness of the suffering of impermanence, the feminist’s first noble truth is an inescapable awareness of pervasive painful patriarchy. Her compassion meditation begins with a reflection on her natural woman’s nurturance, spreading out to all her suffering sisters in the world, and (among the most advanced) to men also; for weren’t they all the sons of mothers, and isn’t the goal an equal and united humanity.

Even more marked parallels to Buddhism can be found in the writings of feminist theologians, such as Mary Daly. Feminist discussions of the entrapping influence of linear rational thought could have come from the lineage of the Zen patriarchs, though this trait is attributed to “sado-masculinity” rather than simply the conceptualizing mind. (Raising another Buddhist-feminist question: do women have less linear conceptualizing minds? And if so, how should their meditations and spiritual practices be different from men’s?) The feminist theologians’ advocacy of spiritual death to the old, deluded self, and re-birth into a new, wise empowered self can be found in all spiritual traditions.

Some feminists are interested in reviving the feminine images in the traditional religions, feminizing or androgynizing God and rediscovering female role-models. Others dismiss all traditional religions as patriarchal, and are turning to witchcraft and Mother Goddess worship for a feminist spirituality. As shown above, Buddhism has a buried tradition of enlightened women role-models, and a rich pantheon of androgynous and feminine enlightened beings (“goddesses”). Especially in the Tibetan tradition, sophisticated visualization meditations involving these female images are used to awaken different latent aspects of our personality, working with powerful emotions to create enlightened states of mind. Feminist witchcraft and Buddhism both approach mythology and deity, symbolism in a psychological and creative way, but in Buddhism (and originally in Hinduism) all the diverse deity images are not only manifestations of the primal male and female principles present in each of us, but beyond that, are manifestations of the Void, enlightened mind. (All the qualities typified by the great Bodhisattvas are inherent in ‘humans and are not separated from the one Mind. - Zen Patriarch Huang Po)

The practice of a feminist Buddhism, perceiving the androgynous Void beyond sexual identity, can lead ultimately to the full, honest, expression of whatever men’s and women’s true natures finally turn out to be. It seems clear that the full integration of these two traditions, having arisen in different contexts and focusing on different parts of human experience, would not only contribute to women’s practice of Buddhism, but to the fuller liberation of humanity.

Special thanks to Molly Brown for transcribing this from the original 1984 essay.

James Hughes Ph.D., the Executive Director of the Institute for Ethics and Emerging Technologies, is a bioethicist and sociologist at Trinity College in Hartford Connecticut USA, where he teaches health policy and serves as Director of Institutional Research and Planning. He is author of Citizen Cyborg and is working on a second book tentatively titled Cyborg Buddha. He produces a syndicated weekly radio program, Changesurfer Radio. (Subscribe to the J. Hughes RSS feed)
TOP