Timphu, Bhutan -- Dzongsar Jamyang Khyentse, a prominent tulku associated with Dzongsar Monastery in Derge, Eastern Tibet and also a renowned filmmaker and writer, shares his wisdom on issues that relates to our daily world. 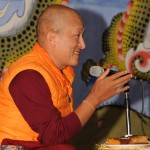 Where do you see our central monastic body heading towards 30-50 years from now?

This is something that we have to really think about.  You need vision. It’s a very big gamble. I have seen monasteries in India, China and Bhutan and I tell them to really think about admitting girls and changing the curriculum. I am not a big fan of the education system that exists today in this world. Do you know that some of the most successful people in the world and Bhutan are all school dropouts?

I have been sort of saying that we should really think dramatically and change it drastically. But you are talking to devotees, to people who are stuck with morality and values. It’s really tough. Yes, I will tell bravely, that I can see, our dratshangs, judging from what’s happening, 50 years from now on, there will probably be only 50 monks.

Having said that, there is a lot of encouraging signs also, like young people I have met who say they want to become a monk but feel guilty because their parents have spent so much. How encouraging for the spiritual world. This is what we should bank on.

Should we allocate more resources towards spreading teachings than proliferating Buddhist infrastructure?

I don’t know whether, “we”, this democratic Bhutan, systematically develop the infrastructure of Buddha dharma. But I would strongly say that Buddhist values, wisdom and message are certainly very relevant today more than ever. It is something I don’t think we should lose because this can happen. I see sometimes, many of the younger Bhutanese are beginning to have some interest in Buddhism because all these chilips are beginning to have some interest. That’s not so good. I always say this, that Mahatma Gandhi who is known for non-violence got the idea from foreigners who got the same idea from Indians. So this could happen to you.  You could be learning Buddhism from some John.

I have always said that the biggest contribution to the world from the west is not science or technology. It’s anarchism. But this I say half jokingly. The thing is, we human beings are such a sucker to rules. We love rules. I don’t think we have the courage and wisdom to live with anarchism. So it’s not going to work. I think its good to, since we will not know how to live with lawlessness, might as well live with some law, even though it’s really not good.

If trulkus are reincarnations of former masters, why do they have to be subjected through exhaustive re-education process?

That is if only they go through all these exhausting training these days. They don’t even do that now. Trulkus are just pretending that they have to go through all these.  After all they are trulku, trulba, which means show magic, drama, exhibition.

It doesn’t take much to divide human beings. Religion just happens to be a very good device. This religion has created lot of chaos and havoc but I have to say that religion has also answered lot of personal quests. When we say religion, are we talking about some kind of a systematic religion or a spiritual path?

Spiritual path is different. It’s necessary, like songs, romance and poetry. Romance from the mathematic, scientific point of view, is just so ridiculous. But it gives some kind of a solace and religion is or especially the spiritual path has so many profound answers to many of the budding questions that we have.

Gomchens say its korzey when they perform prayers and also receive payment. Aren’t they paid for their work like any one of us?

When this gomchen says its korzey, is he being humble? There is a little bit of negative connotation when you say korzey. I really wish these gomchens and gelongs know wholeheartedly that devotees offering money or gifts or service, even a short bow, is kor, which basically is karmic debt. And if you don’t perform your job well, it will haunt you, rather go through the consequences.

I don’t know whether it should be considered like a normal wage, probably not. Although, I am sure within 20 years, if the religious aspect of Buddhism is still thriving in Bhutan, I can already see sort of hotlines for rimdos and gomchens. Like dial 8888 for rimdo.

Is there anything as black magic or nyen in Buddhism?

In Buddhism the most important is the wisdom of non-duality. Rest, methods, anything is fine. Mahayana Buddhism has infinite methods of dealing with people. Generally you’ll never find black magic in the sutras and sastras. There’s none. Actually there are only three that Mahayana Buddhists are not supposed to have – covetousness, harmful thinking, and wrong view. Other than that, anything can be the path.

Why is it that sometimes the more we practice dharma the more pain one goes through, where as the more negative act one commits, the more successful they become?

There is a prayer where Jigme Lingpa says, “Buddhists and Bodhisattvas, please make sure that what ever I want never happens.” Buddhist blessings, he said is when 100 things that you wish never come true but 1,000 things that you dare not wish come true. That’s Buddha’s blessing. So I would say, if you are a serious dharma practitioner, you are fulfilling your wish when things are going wrong. You are seeing the truth, actualising it and when that is happening, you should see it as a blessing. Next time when things are going wrong, go home and throw a big party.

How do wangs, prayers and mantras work?

Wang actually is like lets say, you had amnesia, forgot your name and whereabouts. Then somebody says, you are from Paro and your name is Dorji. You wake up because we have all forgotten our true identity, which is the Buddha.

Some ask me how Buddhist karma works because some do lots of prayers and are not successful while some kill and steal and are still successful. You know this unpredictability of karma. I can tell you karma is basically a science of cause and condition. These advanced scientists today can’t predict tomorrow’s or this afternoon’s weather, how can we ignorant, limited beings predict the complex situation of cause, condition and effect. But one thing we know is that nothing emerges out of the blue. And as Buddhists, we don’t believe that things are created by god, so prayers, blessings, are or could be part of those intricate, complex of cause, condition and effect.