New York, USA -- WHY was I in a tent in northern Vermont? Much less a tent in the woods at a Buddhist meditation center, reading Sakyong Mipham’s “Turning the Mind Into an Ally” by the light from my smartphone? 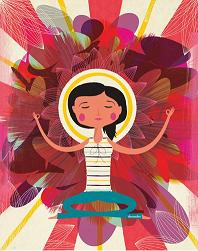 If you really want to hear about it (to borrow a phrase from Holden Caulfield), I was on retreat. Perhaps I should say, I was in retreat, from a frenetic Manhattan life, hoping to find the balance and harmony that have formed the basis of the Buddhist tradition ever since Siddhartha Gautama discovered enlightenment around 2,500 years ago while sitting under a Bodhi tree in Northern India.

The fundamental insight of the Buddha (the Awakened One) is this: life consists of suffering, and suffering is caused by attachment to the self, which is in turn attached to the things of this world. Only by liberating ourselves from the tyranny of perpetual wanting can we be truly free.

Not that I am ready to renounce this world, or its things. “I am still expecting something exciting,” Edmund Wilson confided in his journal when he was in his mid-60s: “drinks, animated conversation, gaiety: an uninhibited exchange of ideas.” So do I. But I need a respite from those things, too.

I wasn’t eager to end like the Buddhist couple who went on a retreat in Arizona and turned up, one dead, one nearly dead from dehydration, in a remote cave. But I am far from alone in my choice of spiritual nourishment. The Vermont retreat was so oversubscribed that people slept on futons in the Shrine Room. (I was lucky to get a tent.) Dr. Paul D. Numrich, a professor of world religions and interreligious relations, conjectured that there may be as many Buddhists as Muslims in the United States by now.

Professor Numrich’s claim is startling, but statistics (some, anyway) support it: Buddhism is the fourth largest religion in the United States. More Americans convert to Buddhism than to Mormonism. (Think about it, Mitt.)

Many converts are what Thomas A. Tweed, in “The American Encounter With Buddhism,” refers to as “nightstand Buddhists” — mostly Catholics, Jews (yeah, I know, “Juddhists”) and refugees from other religions who keep a stack of Pema Chödrön books beside their beds.

So who are these — dare I coin the term? — Newddhists? Burned-out BlackBerry addicts attracted to its emphasis on quieting the “monkey mind”? Casual acolytes rattled by the fiscal and identity crises of a nation that even Jeb Bush suggests is “in decline”? Placard-carrying doomsayers out of a New Yorker cartoon? Uncertain times make us susceptible to collective catastrophic thinking — the conditions in which religious movements flourish.

Or perhaps Buddhism speaks to our current mind-body obsession. Dr. Andrew Weil, in his new book, “Spontaneous Happiness,” establishes a relationship between Buddhist practice and “the developing integrative model of mental health.” This connection is well documented: at the Laboratory for Affective Neuroscience at the University of Wisconsin, researchers found that Buddhist meditation practice can change the structure of our brains — which, we now know from numerous clinical studies, can change our physiology. The Mindful Awareness Research Center at U.C.L.A. is collecting data in the new field of “mindfulness-based cognitive therapy” that shows a positive correlation between the therapy and what a center co-director, Dr. Daniel Siegel, calls mindsight. He writes of developing an ability to focus on our internal world that “we can use to re-sculpt our neural pathways, stimulating the growth of areas that are crucial to mental health.”

I felt this happening during my four-day retreat. Each day, we sat for hours as bees hummed beyond the screened windows of the meditation room, a converted barn. It was hard to concentrate at first, as anyone who has tried meditating knows: it requires toleration for the repetitive, inane — often boring — thoughts that float through the self-observing consciousness. (Buddhists use the word “mindfulness” to describe this process; it sometimes felt more like mindlessness.) But after a while, when the brass bowl was struck and we settled into silence, I found myself enveloped, if only for a few moments, in the calm emptiness of no-thought. At such moments the seven-hour drive from New York seemed worth it.

During the lectures, there was talk of “feelings,” “loving kindness” and “the inherent goodness of who we are” — tempered by good-natured skepticism. (“Feel free to resume struggling with things,” a teacher concluded after a long “sitting.”) But it wasn’t all about looking inward. There was also talk of issues I thought we had left behind. “What’s affecting the world is the unhealthy state of mind — culture, environment and society,” a teacher reminded us: “violence, horror, bias, ecological catastrophe, the entire range of human pain.” In Tibet, he noted, monasteries aren’t sealed off from the life around them but function as community centers. The resistance to Chinese oppression has come largely from monks, who demonstrate and even immolate themselves in protest.

Engaged Buddhism — a concept new to me — has a tradition in the West. Allen Ginsberg and Jack Kerouac, among its early American proponents, didn’t just cultivate their gardens. Kerouac’s Buddha-worshiping “Dharma Bums” were precursors of the sexual revolution (their tantric “yabyum” rituals sound like fun); Ginsberg, a co-founder with Anne Waldman of the Jack Kerouac School of Disembodied Poetics at Naropa University in Boulder, Colo., the first accredited Buddhist-inspired college in the United States, faced down the police at the 1968 Democratic National Convention in Chicago by using meditation as an instrument of passive resistance.

Reading “Buddhism in the Modern World,” a collection of essays edited by David L. McMahan, I was struck by the pragmatic tone of the contributors, their preoccupation with what Mr. McMahan identified as “globalization, gender issues, and the ways in which Buddhism has confronted modernity, science, popular culture and national politics.” Their goal is to make Buddhism active.

As I drove out of the parking lot on the last day, ready — sort of — to return to what passes for civilization, I wondered whether I would be able to hold on to any of what I had learned — or if I even knew what I had learned, or had learned anything at all. Perhaps it was simply the lesson of acceptance — and the possibility of modest self-transformation. A teacher had said: “Don’t fix yourself up first, then go forth: the two are inseparable.” To enact, or “transmit,” change in the world, we need to begin with ourselves and “learn how to have a skillful, successful, well-organized, productive life.” That was a lot to ask from a four-day retreat, but at least it was a start.

My phone pinged. I could check it later.