The Hungry Ghost Festival is an occasion to harmonise separate dimensions of existence.

Kuala Lumpur, Malaysia -- Chinese rituals to appease hungry ghosts, regardless of whether they are enacted within the Taoist or Buddhist tradition, express the desire of believers to live in harmony with aggrieved and neglected “wandering spirits”. 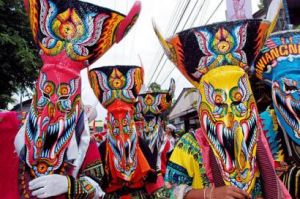 These rituals are regarded as acts of compassion from the living towards these unfortunate spirits because they enable them to “move forward” in their evolution.

Zhong Yuan Jie, known in English as the Hungry Ghost Festival, begins on the first day of the seventh Chinese lunar month, which coincides this year with Aug 30, today.

For one month, families pray on roadsides or at crossroads in a simple late evening ritual that feature the burning of joss sticks and offerings of food and paper money. Similar rituals conducted by business communities are often more elaborate. For example, the array of foodstuffs may be wider and richer and the programme could include an opera show or even modern dance and pop music.

In the Buddhist tradition, the rituals include litanies that facilitate the “transfer of merits” to the unfortunate spirits, with the hope that they will have better “rebirths” or more comfortable lives thereafter.

The festival, to both Taoists and Buddhists, also has the function of teaching filial piety to the young. Furthermore, the rituals are supposed to ensure that the restless spirits do not intrude into the lives of the living or bring them physical harm or some other form of misfortune.

Who or what are these wandering, homeless spirits?

They are believed to be the ghosts of those who died violent deaths or died before fulfilling strong desires. Sometimes, though, they could simply be spirits whose living relatives have long neglected them.

Chinese folklore and some claimed Buddhist texts mention various types of wandering ghosts dwelling in hell, which is said to be a dimension close to that of the physical universe.

They are invisible in the daylight hours but become visible to some people after dark .

As to the origins of the Hungry Ghost Festival, there are several traditional versions, but we will deal here with the Buddhist version, which is interesting because it is traced back to one of the chief disciples of the historical Gautama Buddha himself.

This disciple’s name was Muadglayana. In Chinese, he is called Mu Lian.

Mu Lian, having learned from his deceased father that his mother was suffering in hell, sought advice from Gautama on how to deal with the situation. The Great Master told him that he could alleviate her torment by conducting, in the seventh lunar month, an elaborate ritual that would include the chanting of sutras, sacrificial offerings and the transferring of merits. Mu Lian did all these and saved his mother from further suffering.

As intimated earlier in this article, one of the key beliefs associated with the festival is that spirits can and do take revenge for injustices that caused the death of their earthly bodies. And neither is this belief confined strictly to Chinese tradition. It exists, with modifications, in the belief systems of various other cultures, both east and west. Connoisseurs of English literature, for example, are familiar with the story of Hamlet as told by Shakespeare. Hamlet is asked by the ghost of his father to avenge his murder.

What, then, is a sensible approach to take in considering this issue of spirits and ghosts?

To sceptics, perhaps no explanation is sensible if it does not include material evidence. Perhaps, in matters such as these, only personal experience can convince the cynic.

To me, ghosts are as real as anything that can be perceived with the physical senses. And that is because I have had a ghostly encounter. I was neither hallucinated nor drunk at the time. I was a Buddhist monk and alcohol was forbidden at the monastery.

I also had an out-of-body experience, during which time my physical self was as good as dead. However, my spirit soon re-entered my body – unfortunately, perhaps.

If we were to ponder upon the issue with an open mind, we will find that it is neither absurd nor illogical to accept the idea that there is a spirit world.

A human being is made up of three components – the physical body, the mental-cum-emotional body and the spiritual body – all with different levels of human consciousness. (According to many documented cases, this is true even with the lower animals.)

The “astral body”, as it is known to students of occultism and metaphysics, is the vehicle of emotion, passion and sensation.

Is an astral body equivalent to a “spirit” reborn after physical death?

Other dimensions of existence

In his book “The Astral Body”, A.E. Powell writes: “In the case of a man who has led such an evil life that his astral and mental bodies are torn away from the ego after death, the ego, having no bodies in which to live in the astral and mental worlds, must quickly form new ones.

“When the new astral and mental bodies are formed, the affinity between them and the old ones, not yet distinguished, asserts itself, and the old mental and astral bodies become the most terrible form of what is known as the ‘dweller on the threshold’.

“Thus chained, [the dweller] cannot go onward to rebirth. He is conscious in the astral world, has his human faculties, but cannot control the brute body with which he is connected, nor express himself through the body on the physical plane.

“Such an imprisonment is not reincarnation, though it is easy to see that cases of this nature at least partially explain the belief often found in Oriental countries that man may under certain circumstances reincarnate in an animal body.”

We have to acknowledge that we are in spirit form encased in a physical body. If that is the case, is it not logical to say that there are spirit worlds which we will eventually realise after our death?

Psychiatrist Brian L Weiss, who wrote the bestseller “Messages from Masters”, speaks of different dimensions of existence. “When I talk about other dimensions, I mean other energetic states or even different levels of consciousness, not necessarily other planetary systems or galaxies,” he writes.

“Heaven can be considered another dimension, since energy transformation beyond three-dimensional consciousness is undoubtedly involved.”

And Weiss is just one of an ever increasing number of scientifically minded professionals who believe in multi-dimensional worlds and their interpenetration.