Presidential election: What the Dalai Lama can teach Obama, Romney about leadership

Washington D.C., USA -- After the first presidential debate, polls showed that the majority of Americans felt that President Obama had been too polite and not aggressive enough. He was faulted for his apparent lack of emotion and disinterest in the debate. Governor Mitt Romney's spirited attacks on the president captured people's attention. As a result, during the second and third debates, the president resorted to the same disrespectful behavior that Romney exhibited. Both candidates interrupted one another,  bared their fists and let the punches fly. 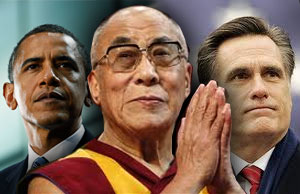 This got me thinking both about the personal qualities that Americans expect to see in a president and, of equal importance, a president's moral values. With several European countries on the verge of economic collapse, the political situation in the Middle East deteriorating and tension between the U.S. and China running high, the next president faces an incredibly complex, volatile international situation that directly affects our future. The president's inner values will guide him in charting the course that America takes. This may mean launching a new military offensive or resolutely adhering to the practice of non-violence.

Against the backdrop of the negative campaigning of the 2012 election, his holiness the 14th Dalai Lama Tenzin Gyatso toured the United States. He spoke to sold-out audiences at several American universities including Western Connecticut State University, the College of William & Mary and Syracuse University, to name a few.

In his talks and his recent book “Beyond Religion: Ethics for a Whole World,” the Dalai Lama describes the need for an ethical system that goes beyond the confines of any particular religion. Secular ethics are possible because mankind's natural compassion is the source of all our shared ethical or spiritual values. He defines spirituality as the practice of non-harming/non-violence both with respect to oneself and others.

Universal secular ethics center around two principles. In the aforementioned book he writes, “The first principle is the recognition of our shared humanity and our shared aspiration to happiness and the avoidance of suffering; the second is the understanding of interdependence as a key feature of human reality, including our biological reality as social animals.”

The quality of discernment is the ability to recognize our interdependence. A good leader is someone who possesses discernment and thus makes decisions guided by the needs of the broader community rather than those of a particular self-interest group. Likewise, when questions of justice are examined in the context of a moral framework grounded in compassion and non-violence, the key values are forgiveness and a recognition of man's ability to change. Capital punishment, for example, violates a compassion-centered ethic because it is motivated by revenge and does not acknowledge a person's capacity for positive reform.

As the Indian Buddhist thinker Nagarjuna explains in his text “The Precious Garland,” a compassionate leader always acts in a truthful manner, practices open-hearted generosity, treasures peace and is guided by wisdom. He embodies the virtues of patience in the face of hardship and respect for all.

The way in which we perceive ourselves has a profound effect on our relationships with others. We point our fingers at others as the source of all our problems. Instead, we need to recognize that our true enemy is in fact our own self-centeredness and negative emotions. Through meditation, we can free ourselves from the destruction that such emotions cause in our lives and enjoy the satisfaction that arises from cherishing others more than ourselves.

In an October 11, 2012 interview that focused on the tragic self-immolations in Tibet, the Dalai Lama said that Tibetans are engaged in a struggle between the power of truth versus the power of the gun. The power of the gun is winning but only in the short term.  He doesn't admire the U.S.'s military power, including its nuclear armaments. Rather, he deeply admires America's values: democracy, freedom and liberty. The true source of the power of America rests in its ideals, not in its weapons.

Disarmament is nothing less than compassion in practice and must occur first within ourselves – a resetting of our own moral compasses and later in our relations with others. The Dalai Lama writes: “What is required, therefore, is both inner disarmament, at the level of our individual hatred, prejudice, and intolerance, and outer disarmament, at the level of nations and states. Rather than pouring salt on the wounds we have inherited from earlier generations, we must start to heal our divisions by committing ourselves to dialogue, cooperation, and understanding.”

Later he continues, “We can learn from the great achievements of Mahatma Gandhi and Martin Luther King Jr. to recognize that nonviolence is the best long-term approach to redressing injustice. If the twentieth century was a century of violence, let us make the twenty-first a century of dialogue.”

Let us hope that our next president heeds his holiness's advice.

-----
Losang Tendrol is a nun in the Tibetan Buddhist tradition and a contributor to The Washington Post’s local faith leader network. She teaches meditation and Buddhism at the Guhyasamaja Buddhist Center in Reston. The center was founded in 1994 and is affiliated with the Foundation for the Preservation of the Mahayana Tradition. The center follows the Gelugpa tradition, the same lineage as his holiness the Dalai Lama.