Spiritual Guidance from the Far East

Amherst, Massachusetts (USA) -- I am not a religious person. By no means am I a spiritual person whatsoever. When asked about my faith, I generally say that I am an agnostic; I’m completely open to possibility. I don’t live my life based on the will of some higher power, I simply try to be a good person, who does good things, for the sake of being good. 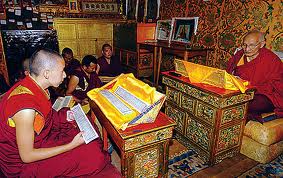 When I recently stumbled across the Buddhist faith, I had a sense of mystified wonder about me, like a child who has wandered into the back room of some department store. My curiosity took hold of me and I began to poke and prod at the countless boxes of various shape and size. Some had labels, some were simply monolithic and imposing, some were completely out of sight. As I meandered through the labyrinth of boxes I came across a section labeled ‘Buddhism’. For the most part their contents were completely unbeknownst to me, I had only heard of a few small aspects of Buddhism, so why not grasp that curiosity and go right in and open a few up?

Tibetan Buddhism is a specific branch of Buddhism geographically located in and around Tibet and the Himalayan Mountain Range (“Intro to”). It is a form of Buddhism focused on several core values and practices, the end goal being becoming a Buddha, that is, to achieve nirvana and absolute enlightenment(“Intro to”). Each and every person is born with the innate potential to achieve Buddhahood, and once that is attained, to help others achieve that very same goal (“Intro to”).

It is said that a Buddha fully embodies all disciplines of Buddhism and is in a state of bliss, free from all mental obstructions and able to understand the true nature of reality. Achieving enlightenment allows one to understand truths of the world and to unlock one’s personal spiritual identity; who and what one truly is as a person. Becoming a Buddha is no simple feat, but one that potentially takes lifetimes to accomplish, going through the process of reincarnation after death numerous times. Buddhists hold faith in the ‘Three Jewels’, the basis’ for their commitment and where they take refuge, those being the Buddha, the Dharma, and the Sangha (“Intro to”). These jewels respectively represent the belief in the Buddha nature, the teachings of the Buddha, and the community of others who have achieved enlightenment (“Into to”). While all Buddhists seek to attain enlightenment, it is a long and arduous process, and requires incredible discipline and focus.

Tibetan Buddhism is renowned for its advanced process of achieving enlightenment. Its unique method for transcending reality is remarkable in that it is at such an accelerated pace that it can be obtained within one lifetime. The combination of difficult yoga techniques and intensive meditations, along with visualizations of “meditational deities”, cause it to be a very unique path (“Intro to”).
The use of tantric literature, or more simply sacred Buddhist scriptures, instructs one on how to perform meditative visualizations among other practices (“Intro to”). Mantras, or chants, mudras, or hand gestures, and mandalas, or sacred art, are all implemented in order to hasten the process of achieving one’s enlightenment (“Intro to”). Another interesting facet of Tibetan Buddhism is its prizing of a lama, equivalent of the term guru, as a spiritual guide and teacher through the process of enlightenment. The lama is one who embodies all aspects of the Three Jewels and can be looked to for initiations and empowerments to help one through their spiritual journey (“Intro to”).

One of the core tenets of Tibetan Buddhism I have discovered is the concept of karma. Now, you probably have a basic understanding of the idea of karma, but what truly is it? Tibetan Buddhists deeply follow the philosophy of “you get what you give”, in generic terms, which is the underlying meaning of karma ("Karma.").

Karma is also looked at as the intention or motivation for performing an action. Tibetan Buddhists believe that good and bad actions in life produce “seeds” that will come to grow later in your life, or even in your next life ("Karma."). Good hearted actions will bring you good while corrupt actions will create just the opposite. It is exactly that, you get what you give. To improve one’s karma isn’t about getting something in return either. A random act of kindness may not merit one in return, yet does it not improve your own personal character? As stated by Mahatma Gandhi, you must “be the change you wish to see in the world”.

Now you might not believe in any of that spiritual, religious mumbo-jumbo, yet the concept of karma should still be one that you can envelop into your life to better yourself as a person, regardless of your faith. Taking on the concept of karma into one’s life is not a difficult one. Many practices involving karma are as simple as thinking before you act and thinking about the greater consequences of your actions.

Meditation is used to study your own mind, realizing the flaws in previous decisions (“Karma”). In order to remove past negative karma, one must directly realize ‘emptiness’ and that you are no longer in control of the past (“Karma”). Recently, I have taken up the practice of meditating on the Four Powers of Purification. These Four Powers are the power of the object, the power of regret, the power of promise, and the power of practice (“Karma”). Essentially these four powers provide one with a set of guidelines for removing negative karma and assisting in the prevention of more negative seeds being planted on your behalf in the future (“Karma”). The practices and methodology of karma are not difficult to accept into a person’s life, and are nothing but beneficial.

Tibetan Buddhism holds a great deal of weight behind detachment from physical possessions. The concept of materialism is one that is absolutely lost to a Buddhist, as they feel that possessions in life are simply illusions (Dwyer). These are temptations that are in place to tantalize and capture your attention from your true goal in life, that is, to discover your true spiritual identity (Dwyer). One of the core tenets of Tibetan Buddhist philosophy is that material items cause pain and suffering and that one must detach oneself from these things in order to attain nirvana (Dwyer).

There is nothing on the planet that a Buddhist will cling to, as that prevents liberation of the soul.The greed and craving for objects comes with an innate sort of violence and competitiveness in controlling them (Dwyer).You may not think of it as violence, yet you go through great conflict simply for the sake of obtaining material possessions. You can be a hard-working adult and live the fullest life you possibly can without clinging to physical possessions (Dwyer).

The fact of the matter is, it is not in human nature is abstain from attachment to physical items. It is a Tibetan Buddhist practice because of just that, it takes practice. The Tibetan Buddhist practice in regards to materialism is not typical of all Buddhist sects. Rather than trying to destroy feelings of attachment and craving, they attempt to morph these feelings into wisdom and learn from them (“Intro to”).

They hold the belief that the physical world is different, yet still inseparable, from enlightenment (“Intro to”). Via meditation it is possible to detach oneself from the material world and in a sense ‘awaken’ from the mundane (Dwyer). While it is difficult in today’s revolution of new technology to extract oneself from cravings and possessions, I have begun to attempt this. In today’s society, we have proliferated our possessions, and yet value has still managed to degenerate. I have been meditating and considering the true values of things in life; what really is important in my life.

As stated by an unknown author, “some people are so poor, all they have is money”. I will have more than money; I will have character. In accepting that there is nothing in the physical realm that I can cling to, the practice of detachment will help me live my life to the fullest.

Countless others have gone on spiritual journeys to attain enlightenment. One man, Eckhart Tolle, wrote a book in which he describes his life experience and how to achieve personal enlightenment entitled The Power of the Now. Up until he was 30, he lived a pointless existence, in a state of anxiety and suicidal depression, until he went through an inner transformation (Tolle).
Tolle is not a Buddhist, in fact, he affiliates himself with no particular religion in particular, being affected by numerous of them. He discusses how the key to enlightenment is to live in the now, stating “that the present moment is all you ever have. Make the Now the primary focus of your life” (Tolle, 28). His guidance to become connected to our own spiritual essence is in many ways extremely similar to that of Buddhism.

Detachment and karma are both discussed by Tolle on his path to finding in peace and living in the now. Many people have been able to find enlightenment or find themselves with or without becoming Buddhists. In closer examination of many of the main religions, there are similar themes (Nhá^t). From Christianity all the way to Tibetan Buddhism itself, and over-arching value is simply to be a good person. One does not require a religion to be a good person. It is not required of me to become a Buddhist in order to follow these few tenets. I will do it to better myself and in doing that, I hope to set an example for others to follow.

Karma and detachment from physical objects are just two tenets held in high esteem by the Tibetan Buddhist faith. These are among countless Buddhist values and practices that govern how they live.  I wasn’t a spiritual person before enveloping these qualities into my life, and I still do not consider myself to be one; I don’t need a religion to satisfy my goal.Opening up those boxes has not only made me a more educated person, but has expanded my outlook on the world and how I live my life. A critical exploration of the Tibetan Buddhist faith and practices has only left me curious for more; I think I might just go ahead and open a few more boxes.