Opting for a simple life

More people are walking away from wealth and embracing a simple lifestyle, among them the son of a billionaire.

Kuala Lumpur, Malaysia -- IT'S time for New Year resolutions again when the enough of the rat race I'm burnt out' groan is oft-repeated and Malaysians sigh about not having the courage to leave stable, conventional jobs to follow their hearts. 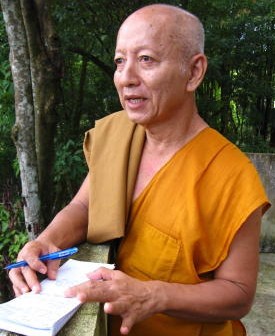 << Ven Dhammavuddho: “It’s about striking a balance between worldly duties and spiritual pursuits’

However, for those who have taken the leap for the simple life, there's no turning back as they ditch their branded suits and hi-tech gadgets, dictated by needs not wants.

While the choices may seem radical to some, those who have done it report happier and more contented lives. Indeed, snubbing materialism for a more meaningful life is more common these days than you think.

Perhaps the most prolific is Ven Siripanyo, the son of T. Ananda Krishnan, Malaysia's second richest man with an estimated wealth of US$9.9bil (RM30bil) according to Forbes' latest list of wealthiest people.

The Buddhist monk who grew up in London, walked away from his father's multimedia empire at age 18 after he was ordained in Thailand. In a YouTube video posted on a Buddhist website, Ven Siripanyo, sharing his early experiences, says “the most valuable thing we can do is to make our minds peaceful.”

Like Ven Siripanyo, electrical engineer-turned-businessman Kenny Ng, 51, too walked away from the concrete jungle five years ago, uprooting his family from Penang to embrace life as an organic farmer in Chenderiang, Perak.

“My engineering business was profitable but it was a hectic lifestyle filled with constant pressure,” he shares.

“My wife and I were looking forward to changing our lifestyle, having been influenced by Dr Lai Chiu-Nan, the founder of the Lapis Lazuli Light' philosophy of a simple life.

“Now, we enjoy ourselves every day as we have more time for each other and the nature that surrounds us. Life is good. I believe I've made the right decision. I've not bought new clothing for myself in the last seven years and am still using a Nokia 1280 handphone which I guess is obsolete now,” he laughs.

His two daughters, who are pursuing their tertiary education, are equally supportive.

“I have some reserve put aside for their education and my wife and I do not need much,” says Ng, a caving enthusiast whose conviction on sustainable living brought him back to the basics.

After volunteering at an organic exhibition, he was hooked. Convinced that answering his new calling was a noble thing to do, Ng sold his engineering and trading company in 2007 to buy a 1.4ha plot of land in Chenderiang where he started his Green Wish Vegi Garden.

A vegetarian, Ng started with zero farming knowledge. He never even tried growing a potted plant in his garden!

Working on a farm is hard labour but for Ng, it's double the effort because he started farming from scratch. Besides producing organic vegetables and fruits, Ng also runs eco-farm tours and homestays to raise public awareness on sustainable living.

He says there aren't many challenges in farming as he is not ambitious about making a profit. “I'm just aiming for a financially sustainable farm.”

Like Ng, lecturer Rozana Hamid Merican, 38, dreams of one day owning a sustainable organic farm which would house an interfaith and learning centre.

“I cannot just be learning and teaching about sustainability and faith and not live by it,” she says.

The former lawyer remembers shocking and disappointing her father with her decision to leave the legal profession.

“It was difficult to walk away because standing up against injustices and inequality was very much what I wanted to do from a young age. When I finally made it, there was a sense of disconnectedness.

“Those in the legal fraternity were selling me the idea of intellectual property law as it was the in thing' and where the money was. It took me a while and a lot of courage to quit because my parents had paid for my legal education which I knew took a toll on them, plus I had slogged hard for my Certificate of Legal Practice,” she recalls.

Scared and confused, not knowing what to do next, she worried about her depleting savings but decided to leave it to fate. Her mother was always supportive and her father came around eventually.

“My friends are a mixed bags of marbles some of them still think I'm a loser but my close friends were supportive and believed in me,” she shares.

A double masters holder, Rozana is currently pursuing her doctorate.

“I'm more focused on the things that matter the bigger picture. And I'm slowly letting go of things that I don't need and channelling my energy into sustainable living and understanding the essence of Islam which is love, compassion, justice and equality. Materialism is something that I'm slowly but surely removing from my life,” she says.

Rozana insists that her values have not changed despite the different lifestyle. Trading in her suits for simple cotton tops, sarongs and slippers, she often rides a rickety old bicycle on errands.

“I'm still the same but with little extras now which I attribute to the blessings of experiences, learning, people, animals, plants and everything around me.

“I've never been a person who puts money, luxury and branded stuff as goals. There's not been a moment of regret for me. I am happy and I don't look back at the past because it's gone,” she says matter-of-fact.

The only material luxury she holds on to these days are her smartphone and a second hand compact luxury sportscar.

She says her 19-year-old Honda Integra was purchased at a very reasonable price and served her purpose when she worked as a lawyer.

“I was travelling quite a bit on the highways then and the car's road handling is good,” she shrugs.

For Penang-born journalist Sharon Cheah, leaving her full-time job in Singapore after being with the Business Times for nine years, was necessary for her “family, a bit of sanity and to regain some sense of balance”.

Feeling burnt out, she decided to pack up and return home. At the end of her three-month resignation notice period, the company proposed a part-time arrangement for Cheah to write from Penang which she accepted. The new arrangement allowed her to work on her pet project a travelogue that was left on the backburner for “far too long”.

Cheah, 43, embarked on the legwork for the travelogue in 2007 covering thousands of kilometres by car, train and plane through the country's 13 states. She had initially intended to complete her book within a year while holding down a full-time job. One year eventually stretched to five before the 231-page travelogue was published some five months ago.

“It (journalism) sounds glamorous, but there are pressure cooker moments (which was every week). It's a rat race for sure in Singapore work dominated much of my time. I now have a bit more leeway over my time which is something I'm grateful for and am now very used to.

“Switching to the part-time arrangement allowed me to really focus on writing Malaysia Bagus! Travels Through My Homeland'.

“Writing isn't lucrative at all, except for a lucky few, so one really has to have a passion for it. (But) it was a goal I'd set for myself and I was so indebted to all those who'd helped me that I would be forever guilty if I didn't complete the book,” says Cheah, who now leads a simpler life with a “bit more (personal) time but also less money”.

She says one can't compare the then and now' quality of life as it's all about adjusting and trade offs but laments not being able to volunteer as often for Habitat for Humanity.

“I don't like travelling for the sake of it. I usually pick a country I haven't been to before, and then organise a team of people to go and build a house there under the auspices of Habitat for Humanity.

“It costs the same as if I went on a holiday but I haven't been on a Habitat for Humanity trip since 2009,” she says.

Vihara Buddha Gotama abbot Ven Dhammavuddho (Mahathera), 65, had just been promoted by the Public Works Department when he decided to renounce all worldly possessions.

The Universiti Malaya engineering graduate worked in the civil service for 12 years until he had saved up enough to make sure that his parents had a home to live in and were taken care of.

“I didn't just wake up one day and decide to be a monk. I stumbled upon Buddhism at age 29, and it was like a jigsaw puzzle coming together. I knew then that I wanted to be a monk but it was only six years later that I fulfilled my life's purpose because it was frightening to think that I would have to give up not just everything I own but also all worldly pleasures I was used to as a bachelor,” he says.

Though he was the youngest of eight siblings, Ven Dhammavuddho was the first to graduate. Understandably, his parents had great expectations and he was especially close to his mother.

“When I told my mother of my intention to be a monk, she told me to wait until her death. My father was shocked his eyes were red as tears welled up. He could not understand why someone with a bright future would just give it all up,” he recalls.

He admits it wasn't easy. One day you are somebody holding a respected post, and the next you are a nobody relying on the goodwill of others for something as basic as food. But the decision is one that he is now at peace with.

“I don't see giving up my engineering job to be a monk as a sacrifice at all especially when I see friends my age still struggling to discover the meaning of life.

“As an engineer, I was contented in a worldly sense but inside, I was still searching. Now I've found my purpose in life,” he shares.

In 1998, he founded a 6ha forest monastery in Temoh, Perak. He notes that these days, dharma talks and meditation sessions are seeing younger attendees.

“More youngsters are seeking answers as opposed to a mainly older crowd previously. But listening is one thing, letting go is another.

“Ultimately, regardless of which religion you embrace, it's about striking a balance between worldly duties and spiritual pursuits.

“Be careful that you are not too caught up in the rat race until you are too busy to ask yourself what's important in life,” the abbot who has written several books advises.

He warns of the danger of leading a “careless life” as worldly things are fleeting and in the end, it's the wealth inside that matters.

“Most of us live for ourselves but life's greatest joy can only come from acts that benefit others”.