Kuala Lumpur, Malaysia -- In the Surangama Sutra, where the Buddha warned of fifty demonic states that unmindful spiritual practitioners might fall prey to, he spoke of the possibility of how... 'that good man [or woman]... greedily seeks skilful means [to further spirituality]. Then, Mara [the chief heavenly demon], having awaited to take this convenience, [sends a] flying spirit [demonic ghost] to possess this [or another] person. With one's mouth preaching the Dharma of the Sutras, this person is not aware, that he [or she] is possessed by a demon, self-proclaiming to have attained unsurpassable Nirvana. 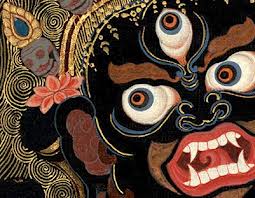 [He or she] comes to others who seek skilful means, where the good man [or woman] is, arranging a seat to preach. His [or her] form changes momentarily, perhaps as a Bhiksu [Buddhist monk], for others to see... perhaps as a woman [or man], perhaps as a Bhiksuni [Buddhist nun]... This person [disciple and/or teacher] is deluded and confused, misled that he [or she] is a Bodhisattva. Believing in such [wrong] teachings, the mind is swayed to break the Buddha's disciplinary rules, to secretly practise [acts of] craving.

[His or her] mouth is fond of speaking about variations of [omens concerning] disasters and auspiciousness... Perhaps speaking of fires [at the end] of kalpas [world cycles], perhaps speaking of wars and fighting, terrorising [frightening] people, causing their families' wealth [and properties] to be dissipated without reason. This is named a 'bewildering ghost', whom when old in years, becomes a demon, who troubles and confuses people. When the thought of being tired and satisfied arises, he [or she leaves to] possess another person's body. The disciple[s] and teacher, [thereafter] all fall into troubles [difficulties] with the law. You should first be aware [of this, so as] to not [re-]enter rebirth, become confused [deluded] and unaware, [thereafter] falling into the Uninterrupted [Avici] Hell.'

Due to the great weight of the Surangama Sutra's moral authority, it is also known as a demon-reflecting mirror, as inner and outer demonic influences are clearly reflected in its final chapter on 'Fifty Demonic States Of The Aggregates', where the above teaching is listed - out of great compassion and wisdom by the Buddha, to prevent truth seekers from straying from the path to enlightenment.

Those who truly strayed away due to demonic influences are those who have not learnt about the teachings in this chapter in time, or who wilfully refuse to see themselves reflected in it, as it reveals their true colours. Being so powerful for recognising demons, this Sutra will be the first that Mara seeks to destroy in this Dharma Ending Age, to urge forgetfulness of, so as to pave the way for his minions to take greater siege of this world. As such, this is a crucial time to recall and study this teaching. The above passage on doomsday sayers has been selected as it is representative of a common phenomenon in our times. Below is commentary on it.

Demons can influence both teachers and students with the weaknesses of strong greed and delusion, which are not always obvious to the unmindful. We ought to note that just because someone appears to preach the Dharma correctly or even excellently to some extent does not mean that person will always do so. No individual teaching by anyone should be received without continual wise discernment.

It is horrifying but possible that "demonic tendencies" can take place over a long period of time, especially in this Dharma Ending Age, when Mara's workings are capable of being more elaborately tactical. For instance, a teacher who appears to build up much confidence in the masses through his or her proper teachings of the Dhama over some time might turn out to be possessed all along, or later, when he or she cunningly confuses followers by subtly advocating poisonous ideas that run counter to the Dharma presented earlier.

As a glaring sign of having great egos and greed to gather attention and followers, false teachers might claim to be 'supreme' masters or 'true' Buddhas, or even manifestations of Arhats and Bodhisattvas. This is clearly against the orthodox Buddhist practice of not attracting followers with arbitrarily community or self-appointed status; but only with the pure Dharma (and exemplary moral conduct).

Some false teachers might not explicitly claim to be enlightened, while continually dropping hints that they have some special attainments or abilities, or that they are ready to be born in Pure Land (or came from Pure Land), before possibly brushing away suggestions of being highly accomplished or enlightened out of false modesty later. Some false teachers know their disciples are openly claiming that they, their teachers, are 'enlightened', but never admonish or refrain them from continually doing so - because this is exactly what they want them to do - to advertise their 'status' to attract more followers.

False teachers' so-called supernormal powers (and special experiences) are hearsay, cannot be objectively proven, or can be analysed and disclosed to be sleight-of-hand tricks or psychological mind games. If they often manifest 'true' powers, all the more should they be stayed away from, as again, the Buddha taught that only the Dharma should be used to attract followers. Refusal to abide by enlightened advice means they cannot be enlightened. Faith in teachers only due to their 'supernormal' powers or fame is simply blind faith; not rooted safely in the Dharma.

Demonic influences can occur at many levels - from the workings of inner personal demons (greed, hatred and delusion) to actual outer demons, from demonic mental suggestion to actual physical possession. Just as demonic influences can come from 'trusted' teachers, they can come from 'close' disciples too, who feed their teachers seriously erroneous information for propagation to the masses.

As false teachers can even appear to be monastics, this is why we should rely on the Dharma and not any personality or the person's fame and projected status. We must remember that as there are many evil cults with huge followings in history, mere popularity does not equate to truthfulness. It was a religiously held belief, for example, by many, that the earth is stationary, which is totally untrue. Amazing as it is, some still believe the earth to be unmoving (and flat).

Long-time followers of teachers with now questionable teachings have to resist the natural urge to defend new unsound teachings out of blind loyalty, for true loyalty, as expected by the Buddha, is towards the Dharma; not any misguided person. (They should correct them instead, though real demons are unlikely to easily regret their ways.) Whether the Buddha is around in person or not, he should always be seen as our fundamental teacher.

As deluded followers tend to rationalise unwholesome speech and actions of their beloved teachers, these teachers thus become more audacious in flouting the Buddha's important moral guidelines, and gradually urge their followers to do the same, openly or secretly, thus sabotaging their spiritual progress. Acts of craving done might include public or indirect amassing of fame and wealth, and/or having sexual misconduct secretly in the name of 'spirituality'.

An attribute of the false teachers highlighted in the Surangama Sutra excerpt is that to gather larger followings, they like to repeatedly speak of impending terrible or doomsday disasters, especially those that are already proven not to exist, will not exist, or are unprovable to have been alleviated by them and their followers. They cause needless panic and fear cyclically, disrupting individuals' peace of mind, familial harmony and societal stability, thus tarnishing Buddhism's name, especially after having gained popularity in its name. Such is the deviousness of these demons, who build up faith in some right Dharma, only to tear it down later with corrupted teachings.

They can cause loss of wealth when donations are suggested for publicising warnings or creating 'merits' to alleviate imaginary disasters. There are endless flip-flop contradicting variations of what they say because each time a predicted disaster pronounced with grave 'exactness' does not occur, they have to rationalise why the event was cancelled or postponed. Some terrible consequences of being possessed by such demons is that they can wreck havoc in one's name and person via speech and actions without the person knowing this, getting them and their followers into much legal trouble later.

If those who claim to propagate 'the (near-)end of the world is coming' for the 'good' of all do not cash in (nearly) all their possessions and fortune (since the end is 'really' near) to propagate this idea all the way, how do they expect others to believe them all the way? Do they even give up half of it all? If not, what they propagate does not even deserve half a moment of anyone's attention. For those with large or small organisations, should they not cash in all their assets, such as properties, to spread their oh-so-crucial and final message? That they do not do so means even they doubt or disbelieve their own propaganda.

Some followers rationalise that it is but a skilful means to spread doomsday hoaxes to urge more spiritual practice. This cannot be the case as such repeated offences are downright lies, which run counter to basic morality. The Buddha himself, being the unsurpassable master of skilful means, never approved or resorted to such dangerous methods, which can cause, as we know from history, mass panic, family and job abandonment, violence sprees, depression and even suicide.

The Dharma is most easily destroyed by those who appear to propagate and defend it 'well' - by causing subtle but definite growing rifts in the Buddhist community. In fact, the Buddha taught that the Buddhadharma in our world can be destroyed only by those who seem to be 'Buddhists'. This includes creation of schism in the Sangha, which is one of the direct paths to rebirth in the deepest hell for the longest time.

With deluded followers uncertain of how to dis/continue following their once beloved but later wayward yet unrepentant teachers, while lacking ability to sift truth from deceit, their spiritual lives become confused, especially if they do not know any orthodox teacher to address these issues objecively. There is, after all, nothing more treacherous than building a whole well with pure water, representing the true Dharma, only to add in a little yet lethal poison later - for drinkers who already have great faith in quality of all the well's water.

As it takes sharp analytical minds to filter fact from fiction, to sort the precious baby representing the Dharma from the bathwater representing defiled teachings, to see how spiritually and physically dangerous misinformation can be, especially when it involves the Dharma, it is best to altogether avoid teachers suspected to be false, by using the Buddha's true guidelines for reference. Only teachers who abide by the Buddha's teachings should be learnt from, especially in this age, when they will be increasingly rare and precious.