My first encounter with Buddhism at Tushita Meditation Centre

Ruta Vilkaite, a volunteer journalist at the Tibet Post International, describes her ten-day stay at the Tushita Meditation Centre in Dharamshala, northern India.

Dharamshala, India -- Tushita Meditation Centre is located on the steep hill above McLeodganj, home of His Holiness the Dalai Lama. It was founded by Lama Thubten Yeshe and his main student Lama Zopa Rinpoche in 1972 for the study and practice of Buddhism in the Tibetan Mahayana tradition. 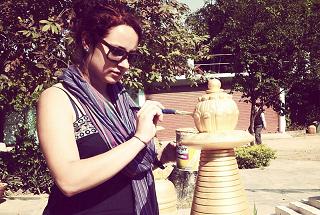 Tushita is popular among Western travellers and demand for courses has grown over the years. The centre currently organizes two ten-day introductory sessions per month but closes for the winter. It also offers month- and even year-long retreats for experienced members.

I attended an introductory course in September 2012 where, in the company of 65 others all thirsty for spiritual knowledge, I gained a strong foundation for a deeper understanding of life and death, karma, reincarnation, mind and, most importantly, the purpose of life.

After checking in, we were shown to our rooms - each shared by four people - and assigned karma jobs - jobs done to benefit others. We handed in all communication and entertainment devices, such as mobile phones, cameras and laptops, and were introduced to Tushita's rules and basic disciplines by the Buddhist nun, Konpen, who hails from Germany.

Later we met our teachers Ondy Willson and Tim Van der Haegen (who could be mistaken for Steve Jobs) - our guides for the duration of the course.

Early next morning, we began our mystifying, sometimes confusing, but always interesting journey through the Buddhist teachings. The main subjects were mind and emotions, karma, rebirth, love and compassion, morals and ethics, the nature of reality and different types of meditation.

A couple of hours per day were allocated to karma jobs, yoga and discussion groups, where questions and confusions could be clarified and during which debates often flared up.

The rest of our time was spent in silence, listening to and familiarising ourselves with our own minds. This could be difficult, especially for those of us who love talking, but the occasional outburst was quickly calmed down by the watchful Konpen.

Unfortunately, some members shared their flu microbes during the course. However, although one woman left due to illness, the rest of us patiently sat cross-legged, despite the sound of frequent coughing, and tried our best to meditate.

Over halfway through the course, the secret of why the vegetarian food we received was so bland was revealed – it contained no onions, garlic, chilli or other strong spices, which are said to disturb the mind and lower concentration levels.

Days eight and nine were probably the toughest as the teachings had finished and our whole time was spent in silent meditation. However, the silence was broken early one morning when intensely emotional cries came in from the surrounding forest. Laughter broke out and all concentration evaporated.

We often received unwelcome guests in our rooms - monkeys, who stole food and were even brave enough to grab it from our plates in the open dining area. They also took laundry, books and pens - any item they found of interest.

Our last evening was the most memorable. Ondy read beautiful quotes from Vicki Mackenzie's book Reincarnation: The Boy Lama - Inspirations from Lama Yeshe's life. Later, we all went downstairs to Lama's stupa, where his relics are held. We lit candles in his memory and chanted the well-known mantra Om Mani Padme Hum. The air filled with tranquility and peace, and we each seemed to be in our own world.

The day we left, the kitchen staff treated us to huge pizzas and sweets in the sunshine, and thank yous and goodbyes were exchanged between students, teachers and other staff. I believe 65 people left Tushita as better human beings with a clearer purpose in life.

"All that we are is the result of what we have thought," - Buddha