Buddhism: Made for the internet

Sydney, Australia -- Buddhism is a largely de-centralised religion, with ancient communities throughout Asia and more modern practitioners in Australia and across the world. Mapping the modern day face of the religion proved a difficult task for Professor Lewis Lancaster, until he struck on the idea of a digital atlas. 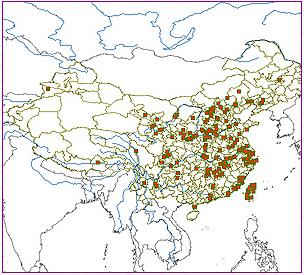 << Religious Atlas of China and Himalaya can be viewed at http://ecai.org/chinareligion/index.html

At the heart of Buddhism is a metaphor for interconnectedness: Indra’s net. The Vedic god’s net, which is supposed to hang over his palace on Mount Meru, is said to stretch to infinity. At each point where the threads cross sits a jewel that reflects all the other jewels, and like mirrors within mirrors, the entire cosmos is reflected.

Lewis Lancaster, Professor Emeritus of Buddhism at the University of California at Berkeley, knows how apt that metaphor is in the current world. For years he's struggled to find an adequate way of documenting the complicated, almost infinite spread of Buddhism from its 5th century BCE Indian origins. That is, until he found an equally complex instrument to map the ancient faith.

Sanskrit and Pali were the first languages of the Buddhist canon known as the Tripitaka (Three Baskets: Sutras, Vinaya, and Abidharma) but by the 2nd century the first translations into Chinese began. These texts were taken to Korea in the 4th century, and from there on to Japan.

To trace this epic journey, and map the contemporary face of Buddhism, Professor Lancaster formed an association of scholars and developed the Electronic Cultural Atlas Initiative, which is essentially a collection of maps with dots, with each dot representing a place where Buddhist temples, monasteries, communities, resources, and histories are available by simply clicking your mouse.

From early on, Buddhism was a uniquely portable religion, spreading far and wide, with few of the barriers that anchored other religions to their original historic settings. After being driven out of India in the late middle-ages, Buddhism was not associated with one nation, one territory, one sacred temple, and not even one sacred tongue.
The Electronic Atlas was not Professor Lancaster's first attempt to engage Buddhism with the modern world. For the Seoul Olympics he transferred a complete 13th century Korean woodblock printing of the Tripitaka onto a CD Rom. During the Korean Olympic Games, the CD Rom was placed in a glass reliquary and carried into the stadium by Buddhist monks.

The CD Rom as sacred relic is characteristic of Buddhism’s adaptability. Relics in fact are typical of Buddhism, and are often found as crystalline knobs in the cremated remains of a Buddhist saint or Bodhisattva. The Temple of the Buddha’s Tooth in Kandy Sri Lanka is a rare example of an actual part of the body as a relic.

Today, however, a sacred relic might just as well be a CD Rom that contains the Dharma or Buddhist teaching. The Dharma teaches that the nature of the material world is transient and insubstantial. It's made of elements that come together and will later decay, only to be reborn as something else. This endless cycle of birth and death is known as samsara, and Buddhists believe it's the fate of all things and beings. The electronic digital age has also plunged us into this perspective and no more obviously than in our attempt to store information in new, fragile forms.

In contrast to the wooden printing blocks of 800 years ago, which can still be used to produce copies of the Buddhist canon, we do not know what digital platforms will be in use even 20 or 40 years from now. To keep abreast of this constantly changing technology, the Electronic Cultural Atlas Initiative, which has been stored at the University of California Berkeley, is now poised to be housed in Taiwan, where a more advanced software will allow it to survive the inevitable obsolescence of the computers and programs it was created on.

'If you start a project on a computer, you have a baby that never grows up,' Professor Lancaster says. 'You can never leave it, never ignore it. If you do, it dies.'

So the transient nature of digital technology is testing the preservation of the Dharma even as it confirms its teachings. If this is not ironic enough, a Buddhist nun and doctoral student of Professor Lancaster, Jue Wei Shin, is recreating a Buddhist festival of 1500 years ago from the ancient capital of Lou Yang. Her tool? An interactive multimedia display of Buddhist images and icons which can be seen at Darling Harbour on 11–12 May for the Buddha’s birthday celebrations.