In Search of a Guru

Petaling Jaya, Malaysia -- I love being a Buddhist not because some say it’s the best religion in the world; in fact, some don’t even consider it as a religion.  I love being a Buddhist simply because its just a way of life according to the teachings of the Buddha.  There isn’t an old dude in the sky whom you have to be afraid of for doing naughty things.  You reap what your sow, everything boils down to cause and effect; in a word, karma - you are what you are today because of your past deeds, and the state of your future being and welfare will depend on what you say, do and think now.  It’s as simple as that but is it really? 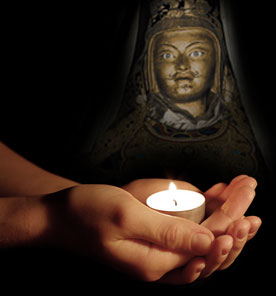 It all seems quite easy to understand the teachings of the Buddha, beginning with the Triple Gem, the Four Noble Truths and the Noble Eightfold Path.  However, as I delve deeper into Buddhism, I realize it’s not as easy as I first thought it was - simply because understanding the Dhamma is not quite the same as realizing it!

Meditation itself was quite easy in the beginning, but as I practised I soon found that tranquillity meditation (samatha) as it is popularly taught is quite different from mindfulness or insight meditation (vipassana) and that the former leads to mental absorption while the latter to wisdom, which you will realize stage by stage.  It can be quite confusing.

Then there is the subject of non-self or anatta which I understand to mean: there is no such thing as “I” or “myself”; there is simply no me or a soul that would go to heaven or hell!  Further confusion arises from words such as nibbana, absolute truth as opposed to conventional truth!  Then there is no answer as to the purpose of life and the first cause and the last effect of our existence.  We pray, we meditate, we do good and avoid evil... who or what are we doing all these for if there is no you and I in the first place? How do you define nibbana anyway?

I soon realized that to fully understand Buddhism, one really needs a guru.  Again, this is not as simple as it seems.  How then does one go about in search of a guru?  Some say that when the time is ripe, one will find a guru or a guru will find one according to one’s karma and past conditioning and perhaps, due to some form of affinity from past lives.   There is a Buddhist proverb that says “when the student is ready, the teacher will appear”.

In one particular sect of Buddhism, guru devotion is an absolute resolution: you do as he says with unwavering faithfulness.  You just surrender yourself.  I wonder where is the wisdom in that if in the unfortunate circumstances, you have chosen a wrong guru.  I have known of friends who devoted years to a guru only to find out that he was a charlatan who was more interested in gain and fame and, in some cases, turned out to be sexually inclined and/or involved in occult practices.

One is of course advised to choose a guru with care and intelligence, to know the guru like a goldsmith who knows his gold.  But we are all humans and humans make mistakes.  Mistakes can come in many forms: either you are gullible and believe that the guru you have chosen would lead and train you on the right path to enlightenment or at least to attain some stages of wisdom, or you choose a guru because of his alluring personality.  And gurus are humans too.  How could one tell from first impression what appears to be genuine without, but rotten to the core within - with ulterior motives of gain and fame?  And who knows, there may be some mentally sick monks as well as bogus ones who may appear quite intelligent too!  There is a thin line between a genius and a mad man!1   There is no denying that there are sincere and well trained gurus who may even be arahants if you are fortunate enough to meet them.  But for every genuine guru, there must surely be some who would lead you to the pits instead of enlightenment.  And in the process you would be made not only financially poorer but led on the garden path to nowhere but emotional drainage and trauma!  And in some cases, a fool and his money are soon parted!

I have known of people who were so dedicated and devoted to their gurus that they spent years serving their cause in the name of Buddhism in exchange for guidance in the Dhamma and meditation.  They were seeking the ever elusive truths about life but only to be abused like a slave serving the master, supposedly as a course of training their perseverance, a test of endurance, patience and devotion.  Sadly, all these innocent devotees were misguided and taken advantage of, subservient to the guru’s tidings for his sensual pleasure, boosting his ego and providing him with a luxurious life.

So how then could you ever find a guru who would be able to guide you on the right path?  How do you tell who is and who isn’t the right guru?  From a lay devotee’s perspective, I would say: Only time will tell.  There will be tell-tale signs if you are sensible enough to notice whether a guru is genuine or not.  However, one would be able to find guidance from several Suttas, notably Kalama Sutta (AN 3:65), Vimamsaka Sutta (MN 47) and Canki Sutta (MN 95) wherein the Buddha gave very clear advice in the search for a right guru.  With permission from Bhante Aggacitta, I would now quote excerpts from his Dhamma talk about the search for a suitable teacher and method entitled  “Not Too Gullible, Not Too Shrewd - How to Balance Faith and Intelligence”2.  He referred to the Kalama Sutta as follows:

“Bhante, for us there is doubt, there is uncertainty as to which of these reverend monks and brahmins speak the truth and which falsehood?”

“Come, Kalamas.  Do not go
1. by oral tradition,
2. by lineage of teaching,
3. by hearsay,
4. by a collection of scriptures,
5. by logical reasoning,
6. by inferential reasoning,
7. by theorising,
8. by considered acceptance of a view,
9. by the seeming competence of a speaker, or
10. because you think, ‘The monk is our teacher.’

Bhante Aggacitta advocated that it was important to have a right guru although difficult to choose one; nevertheless, using the guidelines from the Suttas one should:

Investigate the conduct and behaviour of your potential teacher according to Buddhist ethics, such as:

Investigate how he teaches.  Does he teach:

Always be cautious about your decision.  Bearing in mind the fallibility of the five grounds of acceptance - faith, fancy, oral tradition, theorising and considered acceptance of a view - never be assertive about your conclusion, but be prepared to change when new observations and facts are known.

Have sufficient faith and confidence to start and persevere.  Faith is still necessary because many of your perceptions may not be 100% accurate or verifiable.

May you be well and happy and, in search of a guru, may you find one as I have.

--------
Notes:
1. In fact there is a book called Saints and Psychopaths by William Hamilton, which gives interesting and bizarre stories showing the thin line between them.  Download a free copy from http://www.scribd.com/doc/19649507/Saints-and-Psychopaths.

2. It will be released in MP3 format soon.  Look out for it in http://www.sasanarakkha.org/mp3.html!

Read also:  How to spot a Buddhist cult