Can Buddhists Be Time Travellers?

Singapore -- As we shall see, the Buddhist answer to this interesting question is complex and nuanced… When it comes to travel, we tend to think of it physically. However, it is possible to travel mentally as well. We only need to recall the most vivid memory to know what this means. 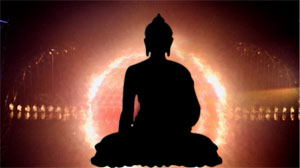 If time-travel is possible, there would be the eventuality of a traveller returning to the past to purposely or accidentally kill his then unmarried grandfather, which would annihilate himself, as his grandfather is a crucial cause, a link in the chain of events, towards the eventual effect that is him, his grandson. Yet, this self-destruction is impossible, because if he no longer exists in the present time, he wouldn’t be able to travel back in time, which means he would be alive, able to do the deed, yet unable too… In short, the paradox suggests that time travel is self-contradictory and thus impossible, as it violates the basic law of causality, rendering this pillar of reality malfunctional or even non-existent.

There are theories of how time travel might still be possible. However, they necessitate that (1) the past cannot be changed at all, (2) or can only change in ways that do not alter the present, (3) or can only change in possible parallel universes, other worlds with similar attributes, which do not causally affect the one the traveller is from. Even if the last two are possible, we would have to wonder what is the point of actual travel if we are unable to change horrific history in this world that matters most to us. (Mirroring these considerations, they are equally applicable on ideas of time travel to the future.)

The truth is, the Grandfather Paradox is based on gross over-simplification of the vast complexities of reality. It speaks only of linear cause and effect breaking down, while the world operates, as the Buddha taught in the Avatamsaka Sutra, as an intricately interconnected web of interdependence, with each phenomenon linked to every other thing, in an one-in-all and all-in-one way. For instance, the traveller’s grandfather’s life and death have much larger implications than ever imaginable. Thus, interactive time travel would warp the fabric of reality so seriously that a single active trip by one person is enough to send lasting reverberations throughout the universe. That the text and images in our history books are not ‘magically’ and constantly morphing proves that history is not being rewritten as we speak!

Yet, as mentioned, time travel is still possible – albeit only mentally, via the supernormal power of recollecting past lives. The bad news is that, being a psychic ability, it is not a skill easily acquired. The good news is that, as stated in the fifth of his 48 great vows within the Sutra of Immeasurable Life, all who attain rebirth in Amituofo’s (Amitabha Buddha) Pure Land, among many other received blessings, will be empowered by him to ‘be aware of past lives, at least knowing all matters of a hundred thousand kotis of nayutas of kalpas.’ (1 koti is about 10 million; 1 nayuta is about 100 billion; 1 kalpa is about 1.28 trillion years) This astronomical number is only figurative, hinting of the limitless, that is equal to the inconceivable powers of Amituofo from his mastery of mind and boundless shared merits.

His intention is to most efficiently facilitate beings in his Pure Land to attain the deepest possible insights through hindsights, by seeing the real and detailed operation of the laws of karma and such within and across many lifetimes – both theirs and others’. Basking in the ideal equanimous learning environment of Pure Land with a Buddha’s tutelage, it is the absolutely safest place to remember past lives as they really were, without the dangers of deluded imagination, or giving rise to attachment or aversion upon recall. With various beings’ existential back stories gleaned, these recollections will nurture the Bodhisattva path, as there will be natural compassionate empathy arising with wise knowledge of how each used to karmically suffer, and how to more effectively guide them towards liberation.

Perfectly aligned with causality as discussed, as travellers, we can only be observers; and not participants. However, with Amituofo’s meticulous empowerment, we can be immersed at our wills, to be within past ‘temporal channels’ with ‘live’ and super high definition 3D settings, with surround sound and such. Although we will not be physically there in the past at all, but psychically, we can be fully there! Despite being unable to change the past then, we can truly re-look and reinterpret it afresh and completely, to learn many missed lessons, recall forgotten lessons, resolve to make amends for the future, and most importantly, to stop letting negative histories repeat. This is how we can break free from the cycle of samsaric rebirth once and for all, and guide others to do the same!
TOP