Buddhism: A teaching of substance, not just forms

A personal insight into a typical Malaysian Chinese who are Buddhist, how and what makes them to be what they are today

Petaling Jaya, Malaysia -- A Malaysian who is born into a Chinese family is most likely to follow the religion of his parents.  This does not necessary apply to all, but it is safe to say that to a certain extent  a large numbers of Chinese who live in Malaysia follows their parent’s faith. It is rather sad that when the baton is passed down there wasn’t really much knowledge being transferred except for traditional rituals. 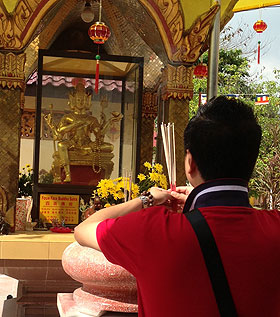 Our parents and forefathers were born in the era of hardship. They were economic refugees facing difficulties due to China’s Culture Revolution and the battle with the Japanese army during the 2nd world war. They sought greener pasture by migrating to Nanyang (South East Asian countries). They came in big numbers and they have brought along with them their way of life, culture, food, language, beliefs and religion.

In time of such hardship, where much energy was spent rebuilding their lives, not much care were used to cultivate the teachings of their religion and culture.

Recently I heard this from a lady over dinner. She said, “It‘s just that my mother did that and so I followed along”. That’s how the younger generation adopted the way of life in Malaysia. This has been the norm and not much has changed. Many are still continuing what their forefathers have been doing for over half a century ago.

However, over the last 5 decades the economy in Malaysia improved and so have the people’s living standards. Agricultural advances and industrialization took place and people were elevated from poverty. The younger generation were getting proper education and soon their generation became more astute with regards to their sense of belonging.

Trends were changing and many young Chinese boys and girls took up Christian/Western names. It was cool to have a Christian name because many educated ones have already taken-up Christianity. By donning a Christian name one was perceived to have also been converted to be a Christian. Conversion was regarded as learned and cultured.

Those who did not speak English and do not have a Christian name were seen as “jinjang” (notorious) and not very smart. All this happened in the 60s, 70s and 80s.
Fast forward to today, this trend has lost its glamour. Not everyone clamours to have a Christian name, although many still converted to Christianity. To some extent this has been done with the price of bad mouthing Buddhism. This happens because there is a lack of understanding of the true teachings of Buddhism. 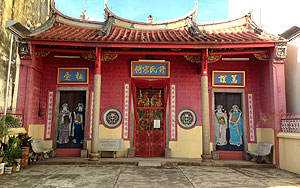 There are a lot of things that caused such trends to be associated to Christianity. Let’s examine some of the causes.

When we were young and first entered school, our parents needed to register us. The school system segregated us in terms or race and religion. We must get an identity and belonged to a certain group even though we were born in the same country. That’s how it worked before, and even now. Our parents had to register a religious label for the children even though many do not know much about their own religion.

It is easy to select a race grouping for your child because there is a box for each race Melayu (Malay), Cina (Chinese), India (Indian) and “dan lain-lain” (others). But when it comes to religion, most Chinese parents would tick “Buddhism”, because the choices were limited. You can only choose to be a Muslim, a Christian, a Hindu or a Buddhist. There weren't any other boxes to tick. So if you were a Taoist, you had to tick “Buddhist”.

Most Chinese Malaysian parents would tick “Buddhism” as a religion for their kids, not knowing that there was a world of difference between Buddhism and Taoism. For those who are not familiar, most Malaysian Chinese living here practices Taoism and lives by values as taught by Confucius.

Buddhism which originated from India is a lot different if we compare it to what is practiced by local Chinese families. Confusion came about when people misunderstood Buddhism for Taoism and Chinese culture. People on the streets then have no idea what Buddhism is.

During the Chinese New Year celebrations, people celebrate with joy to usher a brand new year. This is an auspicious occasion and such practice is acceptable to people from around the world. However, one part of the celebration where the Chinese light-up the fire crackers and make LOUD noise which disturbs the neighbourhood is something to look at.

Sometimes it is done in a “Chinese tokong” (temple). My Malay friend who lived next door asked me why Buddhists are noisy people. The Malay family need to endure the loud firecrackers once a year when it is a Chinese New Year.  I replied him, “Tuan (Sir) this has nothing to do with Buddhism.” It only took me only 5 minutes to explain and he understood.

There was a case I heard recently from a lady who was giving her testimony after converting to Christianity a few months ago. She is in her early 50s and said that she had a hard time living by the rules of Buddhism. In her story she related a tale about how she had suffered for 21 years. Her first child was a baby boy and he was born on a New Moon day.  The priest of a Chinese temple told her that due to the fact that her son was born on a New Moon day. She has to come to the temple and make offering of incense and pray to the God every time it is a New Moon day. So, she did that for years. Obviously she jumped on the chance to end this troublesome ritual when she was informed that she doesn't have to do that if she converts herself into a Christian.

Who could blame her for taking up Christianity at that instant? It is a pity that she has to religiously bring her son to the temple once a month for 21 years.
But this is not a Buddhist practice. Buddha did not instruct anyone to make offering at a temple if a baby is born on a New Moon or Full Moon day. You can never find this in any sutta. It is so unfortunate that this lady was misled and caused her so much trouble for so many years. What a pity.

Core teachings of the Buddha

For many years the Buddha walked the vast land in the North east of India, he taught people to be good. The Buddha’s teaching are revolved mostly around the Four Noble Truth. In the First Noble Truth, the Buddha declared that there is an existence of suffering. He also described the three evil roots that caused these suffering in great details in the Second Noble Truth. Off course he showed us the way to overcome greed, hatred and illusion.

In the Third Noble truth the Buddha stated that this suffering can be stopped. The Fourth Noble Truth described a formula designed by the Buddha to end suffering. This formula is called the Noble Eightfold Path. And if a person follows this path, he has a good chance of getting out of the cycle of death and rebirth.

In the Noble Eightfold Path, a practitioner starts-off by having the right view. By having the right understanding, it will be able to provide the right thoughts, right speech and right actions for himself. This helps the practitioner to train his mind to act mindfully. Other areas he should put into practice is for him to have a right livelihood, put in the right effort, right concentration and right meditation.

The ultimate goal of a Buddhist practitioner is for him to eradicate defilements in his mind. Stop the flow of craving in his mind, acquire knowledge of the nature and be free of any desire of wanting to be reborn again. Upon achieving this, he will cease to be re-born and thus attains Nibanna.

Buddhism also emphasises on the need to cultivate wholesome values in a person. The foundation is morality. Strong morality will give rise to wisdom. This will then give good concentration of the mind.

In the Malay language, the word for human being is manusia. The word manusia is borrowed from the word manusa in Sanskrit, an ancient Indian language. The word Manusa is made up of two root words mano and usa. Mano means the mind. And usa means potential. When the words are put together, manusa means a human being that has a mind that could cultivate to its full potentials.

That’s what we are. A human being with a mind that has an unlimited potentials.

It’s like when you buy a lap top computer. It is made up of hardware and software. You have the Acer computer as the hardware and Microsoft Windows 8 as the operating software.

Likewise, in a human being we have the body as the hardware and the mind as the software. But we (human being) is far more superior than a lap top. We are loaded with four types of software instead of only one OS in a computer.

The four types of human software are, one “sense organs”. This is the driver that processes the information received from external and direct them into our mind. Two, we have the “perception” software. This driver is similar to the hard-drive in a computer. It stores the memories as well as processing the information when it’s called to recognize a voice, a sight, a smell, a taste and a touch. The microprocessor chip in the human mind is a thousand times faster than a super computer.

Three, we also have the “emotion” software. This driver allows us to express our feelings accordingly.  And lastly the fourth software that we have is called the “volition” software. This is a very powerful driver. It is the main software in a human being where all our intentions, volition, decision (whether it’s good or bad) are made here.

Buddhism teaches you to develop the thoughts that are generated from your mind. It teaches you how to manage your mind, how to process your thoughts and respond correctly so that any volitions and intentions that you have in your mind are manifested through wholesome speech and wholesome action.
This is the practice of a Buddhist, creating wholesome deeds.

Do not be confused

I hope people will do some research before jumping into a conclusion and drag certain foolish practices into Buddhism. The effect of misconception about the true teaching of Buddhism will adversely affect those who genuinely wish to embrace this way of life.

Buddhism is a teaching that has a lot of substance and not just form.

-----------
Bugs Tan is a third generation Chinese living in Malaysia. A devout Buddhists, he gives Dharma talks around the Klang Valley. He is easily one of the most prolific inventors in Malaysia. He is an outstanding creator with 15 national innovation awards. In 2007 he won the most respected tribute for an inventor in the country. That is the National Innovation Award which was presented to him by the Prime Minister.