Qinghai Province, China -- A greater proportion of snow leopards are being protected in regions around Buddhist monasteries than in the core nature reserve set aside for the big cats, a study has found. 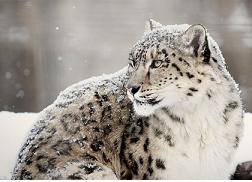 << The endangered snow leopard has some allies in unexpected places.

The leopards are being protected by hundreds of Buddhist monasteries on the Tibetan plateau, new research suggests.

The scientists, who detailed their study last week in the journal Conservation Biology, found that half of the monasteries are within the snow leopards' habitat and that monks patrol the wilderness to prevent poachers from killing the rare cats.

"Buddhism has as a basic tenet -- the love, respect, and compassion for all living beings," said study co-author George Schaller, a biologist with the endangered cat conservation group Panthera, in a statement. "This report illuminates how science and the spiritual values of Tibetan Buddhism can combine their visions and wisdom to help protect China's natural heritage."

Between 3,500 and 7,000 snow leopards live high in the mountains of Asia, with about 60 percent living in China. Their thick, warm fur keeps them protected from the wintry chill at high altitudes, and their wide paws help them pad gracefully through the snow.

Poachers kill the cats for their warm fur and internal organs, which are prized in traditional Chinese medicine. And herders may hunt them because the leopards often eat their sheep or goats. As a result, the snow leopard population has dropped by about 20 percent in the last two decades.

From 2009 to 2011, Schaller and his colleagues surveyed the snow leopard population in the Sanjiangyuan region of China’s Qinghai Province, which is on the Tibetan plateau.

In addition to nearly half o the 336 monasteries residing in leopard habitat, the team found that nine out of 10 were within 3 miles (5 km) of the territory.

Since 2009, several conservation organizations have worked with four monasteries in the region to reduce human-leopard conflicts and to train monks to protect wildlife.

The team found that many Buddhist monks — not just those at the four monasteries they worked with — actively patrolled the areas to prevent the killing of snow leopards; the monks also taught the local people that killing the majestic creatures was wrong.

In household surveys with 144 families, most people said they did not kill wildlife, with many citing Buddhism's nonviolence as their reasoning.

All told, a greater proportion of the snow leopards were being protected in regions around monasteries than in the core nature reserve set aside for the big cats, the study found.

The findings suggest programs that work with Buddhist monasteries to promote snow leopard conservation could be remarkably effective.

About 80 percent of the people within the snow leopards' natural range practice Tibetan Buddhism, so the strategy could conceivably be expanded beyond the current area, the authors wrote in the paper.