Retreat into a Buddhist way of life

By Lauren Rawlins, The Mercury, December 7 2013

Durban, South Africa -- Arriving at The Buddhist Retreat Centre just outside Ixopo on Friday afternoon, I wasn’t quite sure what to expect. My partner and I had signed up for a retreat titled “Your Life in Ten Pictures”. We weren’t looking to “find ourselves” or expecting to experience anything life-changing as the clichés go, but we were curious. 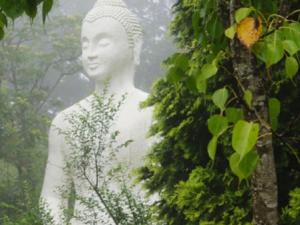 Too many late nights and too much convenience food had led us to a point where we needed to tune out from reality for a while. If I said that was what we found at the retreat I would be lying. We found a way to completely tune into reality, and that was exactly what was needed.

We arrived just in time for supper. We had heard about the retreat first through friends raving about the food.

Both vegetarians, there are few places we can go out to eat where there is more on the menu for us to choose from than a side order of chips, a green salad, a margarita pizza or a chickpea burger – if you are lucky.

So the prospect of exploring new tastes was one of the main reasons we went, and the retreat did not disappoint. All the dishes are prepared from scratch using the finest vegetables, all grown on site, served with freshly baked bread.

They have even published their own cook book with recipes created in the kitchen. The recipe books, Quiet Food and The Cake that Buddha Ate, are top sellers around the country.

Book early if you want to go to one of the cooking classes held over some weekends as they sell out fast.

For me, the main feature of the centre was the spectacular view. It sits on a ridge at the head of the Umkomaas River system.

In the early mornings you see “mist rivers” running through the valleys. And there is no shortage of benches hidden away in little pockets of nature for you to quietly reflect and take it all in.

Wondering around this serene setting as the sun sets is something close to magical. The golden light surrounds you as you meander along cobbled stone paths. You would be forgiven if you thought you had stumbled upon Rivendell.

After dinner we had an introductory talk about what to expect. Here they told us that we would be participating in meditation practise three times a day with talks and activities in-between.

They also made mention of “noble silence”. The retreat asks you to not talk at all from after evening meditation until after breakfast the next day. This may sound strange at first, and it is hard to get the hang of it in the beginning, but the rewards are worth it. You do not

realise how often you pass an unnecessary comment until you are consciously trying not to say anything.

Eating in silence in a room full of people is an interesting experience. My fruit salad tasted amazing, I excitedly looked forward to each piece of fruit, the pineapple, melon, grape and strawberry. How was it different from any fruit salad I had had before? I don’t know, but I am sure that concentrating on the taste of each flavour in silence had something to do with it.

Meditation was a major focus on this retreat, and it is there to help you bring your mind into the present. We are so busy thinking about the past or worrying about the future that we miss what is going on around us right now. When I spoke about completely tuning into reality, this is what I was speaking about.I felt so refreshed and clear-headed afterwards.

Owners Louis and Chrisi van Loon are often at the retreat. Louis sometimes leads the weekend and he did this one.

He is a soft-spoken, charismatic man with a seemingly never-ending supply of knowledge. One of the other guests told me that she often comes to the retreat, and she makes sure to book the weekends that Louis runs.

Chrisi said the retreat used to be one of KwaZulu-Natal’s best-kept secrets, as they normally only had guests from other parts of the country, but they were starting to see more and more Durbanites make the less than two-hour drive to Ixopo – a drive that I hope to take again very soon. - The Mercury