London, UK -- Other non-Christian religions can get a bit uptight about Christmas, but Buddhism is fairly laid back. 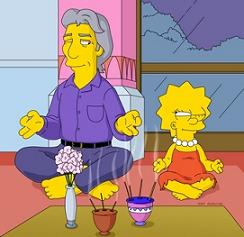 << Does Santa leave presents under the Bodhi tree?

A few years ago the city of Birmingham renamed Christmas to 'Winterval' as a result of protests by non-Christian faith communities, but as far as I'm aware it wasn't the Buddhists who were complaining.

But in general Buddhists are quite happy with Christmas and have no hangups about hanging up Christmas decorations and enlightening Christmas trees.

Presents under the Bodhi Tree

In the Simpsons episode She of Little Faith , where Lisa converts to Buddhism, Reverend Lovejoy tries to dissuade her by saying that she can't celebrate Christmas because "Santa doesn't leave presents under the Bodhi tree". Richard Gere puts things right by explaining that Buddhists believe that those religions that are founded on Love and Compassion are valid spiritual paths.

So you can eat your Christmas cake and still be a Buddhist, though of course you can never finally have the cake whether you eat it or not (all cakes are compound phenomena and thus subject to impermanence).

Excessive consumption of Christmas cake may also promote the realisation that there is no inherent difference between an object of attachment and an object of aversion. ("Can't you manage just one more slice? Look here's a nice piece with extra thick icing... What's the matter, aren't you feeling well?")

Was Jesus a Buddhist?

Many Buddhists believe that Jesus was a High Bodhisatva or manifestation of Enlightened Mind. There is also some evidence that in the 'lost years' Jesus travelled to the East and studied Buddhism - certainly you can't get any more Buddhist than the traditional Christmas message of 'Peace on Earth - Goodwill to All'. And who exactly were the Wise Men and where did they originate? Were they Buddhists?

Dickens' well-loved story A Christmas Carol sometimes upsets the more fundamentalist Christian evangelicals with its 'ghosts' (to an evangelical all such spirits are apparitions of Satan). But from a Buddhist perspective the story makes perfect sense:

Marley's miserliness has resulted in him becoming a Preta (ghost) after death. His attachment in life was to money, and in the Preta realm his attachment manifests as fetters to chains of money-boxes, keys, ledgers and heavy purses.

In order to help purify his karma, Marley sets out to warn Scrooge that the same destiny awaits him. Marley is assisted in his task by two peaceful Buddhas (Christmas Past and Christmas Present - Buddhas can manifest in any form that is beneficial to sentient beings), and one wrathful Buddha ('Ghost of the Future!' I fear you more than any spectre I have seen').

The Buddhas take Scrooge through a sort of mini-Bardo experience, where he reviews his life from the perspective of what he has done to others, or not done for others, rather than what he has done for himself. He awakens into a state of mind transformed by compassion and generosity.

I'm a mince pie junkie, so when it comes to the the annual Christmas Battle of the Bulge, I've long ago taken Langri Tangpa's advice and adopted the practice of 'accepting defeat and offering the victory'.

Unfortunately, this does have a slight problem with the self-generation visualisations. Most of the Buddhas are portrayed as young, slender and sitting upright, which means that those of us with a more Homeric appearance (in the Simpsonian sense) need rather vivid imaginations to 'bring the result into the path'.

So I was quite pleased when I discovered a Buddha with whom I could easily identify - Buddha Hotei - a manifestation of Buddha Maitreya with an amply proportioned physique (The Wikipedia article rather unkindly calls him 'fat').

Buddha Hotei is very popular in China and Japan. He's often portrayed sitting in a semi-reclining posture and laughing uproariously, while distributing presents to children out of an inexhaustible sack. The similarities with Santa are quite intriguing, see Hotei_1, Hotei_2, Hotei 3

Of course the origins of Christmas long pre-date Christianity. The majority of the world's religions originated in relatively low latitudes (around 30°N) where the difference in day length between Summer and Winter is not particularly noticeable. However, for us folks who live further from the equator, the long dark nights and short dull days of midwinter are definitely a big psychological issue. That is why the Winter solstice has always been of such importance to Northern Europeans. It symbolises, if not the rebirth, at least the conception of the new year. In the Celtic calendar Imbolc (Candlemas) was the actual birth of the New Year, with the appearance of the first lambs and green shoots.

The early church failed to suppress the solstice celebrations and instead adopted them (much as they planted churches on pagan sacred sites), overlaying the scarcely concealed Druidic symbolism with Christian attributes. There is actually no historical evidence that Jesus was born on the 25th December.

The Celtic annual cycle of Imbolc, Halloween and Winter Solstice offers a rich source of symbolism and analogy for the process of rebirth, life, death, bardo and conception that would not be as apparent in traditional Buddhist countries, which are mostly at lower latitudes. So it is likely that as Buddhism continues to spread in the Anglo-Celtic cultural areas, it will adopt some of the Winter Solstice customs. There is no reason for in not to do so, for it is often remarked that unlike most other religions, Buddhism is not tied to a particular culture. It is effective for any sentient being, anywhere, any time.