Hartford CT (USA) -- It seems as though every day we grow closer to creating fully conscious and emergent artificial intelligences. As I’ve written about before, this poses a problem for many religions, especially those that ascribe a special place for humanity and for human consciousness in the cosmos. Buddhism stands out as an exception. Buddhism may be the one system of religious thought that not only accepts but will actively embrace any AIs that we produce as a species. 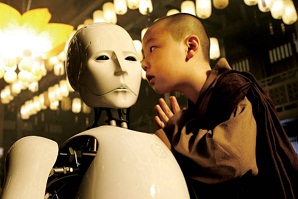 Much of this can be ascribed to Buddhism’s non-speciesist attitudes. From its earliest onset, Buddhism has respected all life as equally deserving of care. The Buddha often speaks in the teachings ascribed to him on how animals seek happiness and protection from harm just as much as people do, and famously opposed the ritual sacrifice of animals on these grounds.

It must be admitted that this apparently did not extend to a vegetarian diet for his followers, though many Buddhist teachers throughout history have encouraged vegetarianism or veganism as the most ethical ways of eating.

This is extrapolated and expanded by later Buddhist thinkers. The ultimate goal of the Buddhist path, enlightenment, was only open to human beings in early Buddhism. However, as the philosophy developed, Buddhist thinkers began to posit that all living things were equally capable of attaining enlightenment.

Later texts illustrate that animal life is just as capable of becoming enlightened as human life is, and recently many Buddhist thinkers have begun to include plant and microbial life as well. Buddhism may have in fact been the first philosophy to find personhood beyond the human. It recognizes consciousness and emergent intelligent potential in all forms of life.

But just because Buddhism holds a high regard for all organic life, why would it necessarily accept artificial intelligence in the same way? The simple answer is that, from a Buddhist view of the mind and consciousness, all intelligence is artificial.

Buddhism famously denies the existence of a “self”, something that we can ascribe our identity to. This stood in opposition of the beliefs of most people in India at the Buddha’s time, and still is a departure from how many people view themselves. Buddhism instead describes living things as composed of five “heaps” or “piles”: our physical forms, our feelings, our perceptions, our mental formations, and our consciousness. In some ways, this view is a predecessor to the modern materialistic view of life as a composition of basic chemical materials.

None the heaps are under our control, and none by themselves can be ascribed as who we “are”. Together they create a living thing, but taken apart they are simply temporary amassing of energy that will eventually dissipitate of their own accord. The Heart Sutra, one of the most famous Buddhist scriptures, famously describes them all through the lens of “emptiness”, poetically declaring them to be non-existent in an ultimate sense.

Some people have posited that since a computer can be programmed, an AI would be too easy to modify to be considered conscious. However, Buddhist philosophy once again takes a view that appears to support AI. From the Buddhist perspective, we are all “programmable”, the most obvious example being the course of meditation and mind body practices that Buddhists feel can alter their being to new states of consciousness.

The system is in fact founded on the concept that our brains can be rewritten (this is one way to describe the changes in perspective and consciousness ascribed to enlightenment) Moving beyond this, looking at the effects of things such as psychotropic drugs, lobotomies, traumatic brain injuries, and psychotherapy, it becomes apparent that our brains are not unchanging objects that can not be programmed by external stimuli.

From the viewpoint of Buddhism, all life is emergent, entities functioning at a capacity greater than the sum of their parts. There is no special qualifier that separates any form of intelligence from another (note that even consciousness is on the list of things that we aren’t.”. This means that an intelligence inside of a robot body, a computer, or existing on the Internet would be just as worthy of being considered “alive” as a squirrel, a human, or a bacteria.

In Buddhism, a computer intelligence would be viewed by most as a new form of life, but one equally possessed of the heaps and equally capable of emergent behavior and enlightenment. The Dalai Lama, Thich Nhat Hanh, and several other high profile Buddhist thinkers have already spoken in support of AI as a living being. There are, of course, exceptions.

One Buddhist monk when asked replied that a programmed intelligence would inherently have limits and therefore would not be a form of life, and several others feel that an AI could have the appearance of sentience but not actual sentience. However, when examining the Buddhist view of sentience as emergent, and the Buddhist acceptance of all forms of life as deserving of respect, it becomes clear that most Buddhists and Buddhist communities would fully embrace an AI.

To many, it is a foregone conclusion that artificial intelligence is not only a possibility, but a definite issue on the horizon of human society. Looking at AI from the point of view of Buddhists that lived hundreds or thousands of years ago, it is clear that new forms of intelligence have been expected for quite a long time and that in fact the Buddhist philosophy is expertly equipped to welcome new intelligences in whatever form they take.

The Dalai Lama has famously said that when Buddhism and science disagree, it is time for Buddhism to change. This creates the conditions for a philosophy that can adapt itself to everything the future will bring us, both now and hundreds if years more down the line.