The Buddhist Leap of Faith

Melbourne, Australia -- One of the recurring debates surrounding the practice of Buddhism in the West concerns faith and the role it has in the religion. 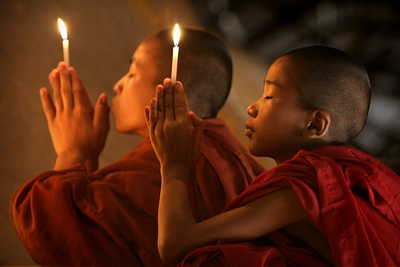 In many Buddhist commentaries available in the West, Buddhism is often contrasted with other religions in that the practice of faith is treated as secondary - or, according to some, doesn't exists at all.

It is this attitude in Buddhism that originally attracted me, like so many other Western-Buddhist converts, to the teachings. The idea is fundamentally that you aren't changing your ideas and that you aren't being asked to believe in things that you couldn't rationally understand in the first place.

However, after some time of practicing and learning Buddhism on my own, as well as staying at monasteries on several occasions and seeing how Buddhism is lived by the lay and monastic community, it became clear that there is a strong element of faith in Buddhism that needs to be unpacked.

Edwin Ng is a cultural studies academic at Deakin University and a postcolonial "Western-Buddhist" convert, who has written his thesis on role of faith in Buddhism. He says that one of the main reasons this debate around faith in Buddhism is so prominent is the way we frame the question.

"Often we are still confined to this Euro-Christian-centric understanding of faith. Faith that's often blurred with this idea of 'belief as conscious assent', this idea that belief means that you consciously accept a certain doctrine or proposition, it's very important in Protestantism. This notion of belief has become a dominant one, but that's not the only way of understanding belief and it is not a native concept to Buddhism."

Ng argues that instead of thinking about faith as "conscious assent" when referring to Buddhism, it should be understood as more closely related to the notion of trust - the kind of trust that any listener must have in the speaker for him or her to sit and listen to an idea or teaching. Even to begin sitting and meditating requires a degree of faith that the practice will be beneficial. Ng goes on:

"When thinking about faith as belief, as conscious assent, you're trying to draw faith into an oppositional position with knowledge. But the notion of faith I'm talking about is mutually supportive of knowledge and it's a question of ethics, it's about ethical reflection. This notion of faith is unavoidable in questioning our relation to the other, as much as it is to our notion of self."

One of the texts regularly referenced in this debate around faith is the Kalama-Sutta, of the Pali Nikayas - often cited as proof of Buddhist epistemology. In this sutta the Buddha is visited by the Kalamas who put to him that there are many teachers who proclaim that their teaching is correct, and then ask the Buddha, "Which teacher speaks the truth?" The Buddha tells them that doubt is understandable and that they should practice the abandonment of "greed," "hatred" and "delusion" - and if there is a rebirth and if there is karma, they will benefit; but even if there isn't, they will have been purified and lived a better life.

Despite the frequency with which this text is invoked, some have questioned the translation and suggested that it is quoted selectively without having regard for the context of the whole sutta. As a result, it is often forgotten that the Kalamas are asking about which teaching to put their faith in. Ng suggests that even if one accepts the translation, it can't be ignored that at the end of the sutta the Kalamas take refuge in the Buddha, a practice of faith.

"It can be seen that the Kalamas themselves did not attain any kind of epistemic certainty about rebirth, karma, and so forth, when they eventually made the decision to take refuge. There is a certain leap of faith or gesture of trust being performed by the Kalamas - a certain act of 'good faith' that is supported by ethical considerations about one's wellbeing in relation to others, rather than epistemic certainty about the truth claims of rebirth and karma.

"I argue that when Western-Buddhists, particularly those who are inclined to argue that Buddhism is scientific or that it is rationalistic, they read the Kalama Sutta as if it is talking about the verification of knowledge, about epistemology. But it is not, it is ethical advice. What the Buddha is saying is, 'try out these teachings for yourself and observe in your own daily interactions if it's helping you out, if you feel this is good, then continue with it'. So this actually leaves open a gap of uncertainty and then you proceed with trust."

Ng argues that faith remains essential in all Buddhist practices "at every step of the way." He explains how the different sub-sects' emphasis on faith has evolved in response to historical events, with some lineages emphasising it more than others.

"This question of belief, this question of whether Asian traditional Buddhists are doing blind faith or not - I think it's very problematic to stop talking about it in terms of belief. It's much harder to actually look specifically at what they are doing on a local level, than it is to work with some false universal abstract of belief or rationality."

He adds that much of the debate around faith comes from a meditation-centric approach to Buddhism that is popular in the West.

"Once you begin to pay attention to this set of actual spiritual practices, then you might begin to see that these people - these lay Buddhists - they may not read the suttas, they may not go on meditation retreat, they may devote most of their time and energy to giving alms, food or donation, but why is this any less of a Buddhist practice? Why should the cultivation of service and generosity be considered any less authentic?

"Furthermore, this notion of meditation as the core defining characteristic of Buddhism is a fairly recent phenomenon that developed only in the late-nineteenth century. It's partly influenced by the Western colonial discovery of Buddhism.

"There was a greater emphasis on origin, going back to authenticity, so this prompted Asian Buddhist to go, wait a minute, let's take this on board. That was actually a means for them to reform traditional Asian Buddhism and turn it against the colonisers and say, 'Our religion is more advanced than yours'. It became this reversal process, that is why in Thailand and in Burma, part of this huge lay meditation movement, Vipassana, was a way to reform Buddhism and it was drawn as a means of anti-colonial resistance."

Ng also points out that many of the Buddhist movements that place more emphasis on faith, such as the Pure Land tradition in China, Japan and Vietnam, also come from a very particular historical context.

"It developed at a historical time when Buddhism was mostly what the cultural elites were doing; this developed as a lay movement. For the illiterate peasants, who can't read the suttas - you can't study, but it doesn't mean that you cannot seek Awakening.

"So you have a different kind of practice where if you keep the precepts and if you recite the name of the Amitabha Buddha with enough faith and enough devotion, it will allow you to get reborn in the Pure Land (similar to the Western concept of heaven) and that will accelerate your rebirths for Awakening."

However, Ng argues that in all traditions of Buddhism, faith - Saddha - remains unavoidable.

"It's one of the five spiritual faculties, it's one of the factors of Awakening - you can't avoid it. You might try and translate it in various different ways but it is there. So pay attention to how you want to translate and explain this notion. When you are trying to explain it as confidence, or a kind of faith that is not blind, based on trust, pay attention to whether you are replicating certain Euro-Christian understandings."

When I asked him about certain teachers of Buddhism that are popular in the West, such as the Dalai Lama and the late S.N. Goenka, and how they often portray a lesser emphasis on faith, Ng suggests:

Ng goes to add that the dialogue around Buddhism needs to move beyond the repetitive questions of faith and religion versus philosophy.

"Now that Buddhism has entered into Western culture, we need to engage in a process of dialogue. It actually offers us a great opportunity to begin to break away from these European-Christian habits. I think we need to be mindful of the extent to which such debates are coloured by certain ethnocentric outlooks, since the dualisms between religion/philosophy and faith/knowledge that have come to be taken for granted in Western understandings are not native to Buddhist understandings as such.

"If you want to say you are curious about Buddhism, good, but relate to it and speak to it on its own terms - be hospitable. When someone invites you into their home you don't make demands on the host. I think what's being overlooked when people talk about Western Buddhism is that it's not a process of ownership, or possession. Think of it rather as a hosting."

---------------------
Jarni Blakkarly is a Melbourne-based free-lance journalist and a journalism student at RMIT. He is the Politics and Arts Editor at Asian-Australian publication Peril Magazine and correspondent for Tokyo-based The Diplomat. He is predominantly a follower of Theravada Buddhism.