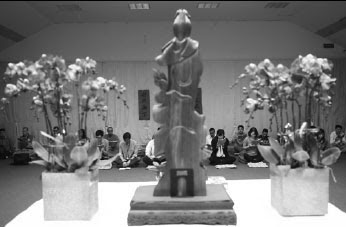 << Participants from across the nation take part in a meditation session in Qixia Temple in Nanjing, Jiangsu province, on Tuesday, to gain firsthand experience of Buddhist life. Yang Bo / For China Daily

"I never took sleep and food this seriously," Chen said.

After seeing on the Internet that the temple was recruiting 50 people nationwide to take a meditation journey from Tuesday to Friday, college student Chen made a phone call and was chosen from among 3,500 applicants.

"I felt dizzy several times when I chanted with the monks at 5:30 in the morning on an empty stomach," Chen said. "I used to stay up late, but the temple has a regulation that we should wake up at 5:00.

"Sitting cross-legged for hours also makes some participants feel strange. I couldn't bear even 10 minutes this morning as my legs gradually became numb. The monks told us that it always happened to newcomers, and we could walk around for a while."

An hour later, when the participants had breakfast together with the monks, the whole dining hall, though it housed hundreds of people, was silent. People are supposed to make no sound when they eat. Breakfast was a bowl of soy milk, a fried breadstick and some vegetables.

"We had various kinds of vegetables for lunch and dinner because people are not supposed to eat meat at Buddhist temples," said another participant, office worker Yu Ying. "To my surprise, the dishes at the temple tasted good. I may try to become a vegetarian in the future for my health."

The temple also requires participants to refrain from using cellphones to achieve a better meditation experience.

"Many people's lives are filled with anxieties and desires," said Zhang, a college teacher in Nanjing who preferred that only his surname be used. "But as social animals, sometimes we cannot fight off our desires. I consider that the meditation journey at the temple provides people a chance to look inside themselves and find inner peace."

It is suggested that participants go to bed before 9 pm and refrain from drinking, smoking and gossip. Also, only unscented soaps, shampoos and toothpastes are allowed.

"Come with no prejudice and leave with ease, that is what Zen is about," said Master Longxiang, abbot of Qixia Temple, when he greeted the participants. "You will meditate, chant and learn traditional Chinese culture, such as calligraphy and a tea ceremony, during the four days."

According to the temple, another meditation class will be provided to 150 people during the New Year festival. There is no charge for food, accommodation and activities provided by the temple.