Sydney, Australia -- Close to two million homes in Australia have solar panels – they’re taking off! But we’d like to make them even more cost-effective by capturing more energy from the sunlight. One way to do that is to direct sunlight’s colours into different solar cell layers. 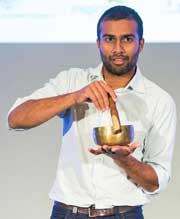 << Niraj Lal with a Buddhist bowl of the type that inspired his research into solar cells.

These solar cells are called tandem cells – the solar version of a tandem bicycle.

Different colours of light have different energies, which is why we get sunburned with UV but not with red light, the lowest-energy wavelength of the visible spectrum.

Traditional silicon solar cells are best at capturing red light photons – because of the nature of the silicon atom. Unfortunately, these solar cells can’t efficiently capture the higher energy of other colours of light.

If a silicon solar cell absorbs a super high-energy UV photon it can’t extract any more energy from it than from a red photon – it is somewhat like pouring the water from a big bucket into a small one, wasting all the extra water.

Engineers are tackling the problem by using other materials, such as recently discovered perovskites, to capture higher energy photons. They can layer this material above the silicon creating thin stacks that are referred to as “tandem cells”.

High-energy photons are absorbed in the top solar cell and lower energy photons pass through to be absorbed by the bottom solar cell. With this approach engineers aim to double the efficiency of rooftop panels.

A confounding problem is that flat surfaces tend to reflect light, which means we lose many photons. Our approach to solving the problem was to structure the surface of each layer to look like an array of miniature Buddhist “singing bowls”. In the same way that Buddhist bowls resonate with sound, our nano-bowls resonate with light.

The reflected photons bounce around inside the bowls until they are absorbed. Fine-tuning the tiny bowls’ size controls the colour of light that is trapped there. My PhD research showed this effect can increase the efficiency of experimental solar cells by a factor of four.

More than a billion people in the world don’t yet have access to electricity. We hope our research will help pave the way for a future with cheap and efficient sustainable electricity.