Senses Perception  The Interpretation of the Logical School

Singapore -- In early Buddhism, the origin of a perception was explained as an interdependent between three elements; an external object, a sense organ and pure consciousness. This produces a sensation resulting in the formation of an image, concept or a judgment by the element of conception. The element of pure consciousness is present in all cognition. It is the sixth sense organ. The mind/intellect is a part of this organ. 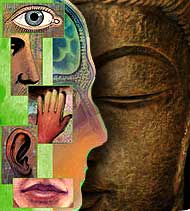 Here the soul of the eternalist that lights up the external organs and make the whole process of cognition conscious is dropped. The whole process of coordinating the external organs and the internal operation of the mind is replaced by the sixth organ. This organ, the pure consciousness is employed in watching the operation of the mind perceived by ourselves which is the special objects of the sixth sense. It only assists the work of the other senses in the perception of external objects. It is thus a stream of pure consciousness cognizing all mental phenomena directly and external object indirectly.

Dignaga was led to abolish the sixth sense and to replace the physical sense organ by pure sensation. The perception of an object was explained as a moment of pure sensation followed by the construction of the image of the object by the Understanding, a mental or intelligible sensation.

The logicians believe that what a thing is in itself, what its essence is can never be express. It does not exist. We can only know things by their relations. What the colour blue is, we will never know. We can only divide all colours in blue and non-blue. The non-blue can be further divided into other varieties of colours. The definition of blue is that it is non-blue and vice versa.

Sense perception is one variety of intuition. There is also another form of intuition, an intelligible one. But it is a faculty of a saint rather than that of an ordinary humanity. This intelligible intuition is present in every perception. It is the 2nd moment that follows on each pure sensation before our understanding takes over and constructs an image of each pure sensation.

Dharmakirti says – That sensation is something quite different from productive imagination and can be proven just by introspection. Now, if we are to stare at a patch of colour and withdraw all our thoughts from it and become as though unconscious of it, this will be the condition of pure sensation. If we than to awakened from that condition and begin to think, we will notice a feeling of remembering that we have an image before us, but we did not notice it whilst we are in the foregoing condition because it was pure sensation.

We do have an unmistakable feeling of our personal identity, a sense of our own self. This feeling accompanies every state of our consciousness. When we see some object and at the same time are conscious of a pleasant feeling arising, it is a feeling of the condition of our ego. It is a direct self-perception in being self-conscious. It is something additional accompanying every mental state, different from the perceived external object. This something is our own ego. It is a direct, non constructive and not an illusion. It therefore falls under the definition of sense-perception as one of its varieties.

It is a fundamental tenet of the Logical school that every consciousness is self-consciousness. Consciousness can only be known by itself. It is self-luminous whereas matter and external objects can only be known through consciousness. A cognition of an external object is a cognition of that cognition, it is an awareness of our awareness. Dharmakirti point out that such mental state as pain and pleasure are of the nature of consciousness and they cannot be cognized by other cognitions. It does than follows that all cognitions and mental states are self cognized. That all volition is, on the one hand connected with some object and on the other side self-conscious. It is maintained that if we did not know that we have perceive a blue patch, we never would have perceived it. Thus, all consciousness, mental phenomena, images, ideas, feeling and volitions are self-conscious in themselves. Self-consciousness in this sense is synonymous with life.

In Buddhist logic, the two diverse elements of a non-constructive pure sensation and a constructive or conceptual synthesis, together with the theory of introspection and Buddhist Nominalism is the basic fundamental feature on the subject of Buddhist epistemology.