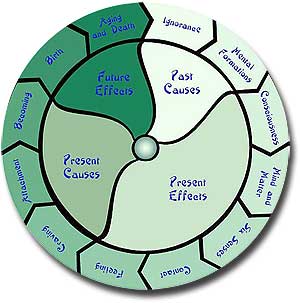 To the Buddhist, the potter is only a series of point instants. In one of this instant, it is followed by the first moment of the series of point instant called a pot. It is an impersonal process, they is no enduring Ego’s working on the pot. The cause ceased to exist when the effect is produced. To the Buddhist, simultaneous existence of cause and effect is not possible. It is only possible when both are static and causation is than an imagination.

Existence in Buddhism is a dynamic process, not static. What does not work, what is inefficient does not exist. Existence is composed of a sequence of point instants which are interdependent. Every point instant is a cause for the subsequence point instant. Things cannot be produced by another thing. All things and people are momentary existences. There is no real motion, because there is no duration. There is no real production as production requires time. It is only a limitation of our cognition that we do not perceive the distinctness of similar moments and assume that they represent substance and duration.

It is an illusion to assume that a thing can exist placidly, without acting, and then suddenly rise and produce an action. Whatsoever exists is always acting, is always a cause. Existence is change. What is non-cause does not exist. It is also a non-reality.

A thing does not produce anything alone. Result come into being only when there is a combination of other elements. This totality is composed of causes and conditions. To the realists, causation consists of a succession of two static things. It is a one-to-one relationship. To the Buddhist, there is no destruction or creation of things. There is always the present of constant, uninterrupted, infinitely graduated changes going on. A result can be produced by human cooperation, but it is just one cause at a meeting point of the convergent stream of causes. There is infinite variety of circumstances that can influence the production of an event. Needless to said, there are some fairly predictable regularities of sequence that can be cognized by us in different lines of causation.

To the Buddhists, empirical existence is a state of Bondage comparable to a prison. To the determinist, the Buddha declared that there is freewill, free action but there is also responsibility. As to liberty, there is also retribution based on the laws of causality. The teaching of karma is just one form of causality. Life is a constant movement towards a final deliverance. It is this movement, this life that is subjected to strict causal laws. When final deliverance has being attained in Nirvana, causation is then extinct.

We can distinguish four main shapes of the theory of Causation or Dependent Origination, two from early Buddhism and two others of the Mahayana tradition. The early discourses on the Dependent Origination doctrine are found in the Suttas. It is describe in a series of twelve or less conditioned links with moral bearing where there is bondage and deliverance. The general one is found in the later philosophical treatises where all the elements are explained and the different line of causation concluded. In early Buddhism, the elements exist but are impermanence.

The Mahayana interpretation of the doctrine of Dependent Origination is quite different. In the first period, interdependence means relativity. Relativity means the unreality of the separate elements as each element only arises when the right causes and conditions are present. The elements are nothing by themselves. The twelve conditioned links of Dependent Origination is declared as a reference to phenomenal life only. The general theory of causation is likewise declared as conditional and unreal as well. Thus, there is no plurality, no differentiation, no beginning and no end. The cosmos is only a motionless illusive reality.

In the last period of the idealistic and logical school of Mahayana development, the Dependent Origination doctrine is concluded by Santiraksita as follows: ‘I salute the Buddha who has proclaimed the principle of Dependent Origination, according to which everything is kinetic, there is no God, no matter, no substance, no quality etc., but there is strict conformity between every fact and its result… Dependent Origination here means motion, a Cosmos which is essentially kinetic.  In both these periods, non-duality and emptiness becomes the central theme of the teaching of Causation of the Mahayana tradition.