The Unreality of Time and Space

Singapore -- The Buddhist theory of momentariness implies that every duration in time consists of point-instants which following on one another. Every extension in space consists of point instants arising in very close nearness and in very rapid succession to each other giving the impression of stability to things we detect. There is no Time, Space and Motion over and above these point instants. Entities that are constructed from these point instants are by our imagination. 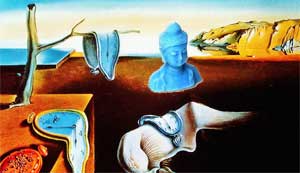 The realist considered both Time and Space as two all embracing receptacles containing each of them the entire universe. They are unique in themselves and the names given to them are proper names and not general terms. Different times are parts of the same Time, so are divided spaces part of the same Space. It is therefore the objects that are situated in them that are divided. Space and Time are two separate realities. In early Buddhism, space was considered a real element of the universe. It was considered to be unchanging, eternal, an all embracing element.

The Buddhist logician denied the reality of both Time and Space. To be real, a thing has to possess separate efficiency of its own. Space and Time does not possess such quality. They cannot be separated from things existing in them. Hence, they are not separate entities. It is because of our productive imagination that we are able to distinguish between the things and its receptacle.

Every point instant may be viewed as a particle of Time or Space and as a quality based on our differing mental attitudes. When a point instant, the ultimate real is cut loose from our imagination it is without quality, timeless and is not divisible. To the Buddhist logicians, only subtle time of the point instants is real. Space and gross time are not separate entities. They are a priori intuitions, and not objects of the five types of sense experience. Hence it is nothing but an illusion of the intellect. Their empirical origin cannot be conceived, but they can be dialectically destroyed on the score that duration and extension commonly used in everyday life contains contradictions and cannot be accepted as objectively real.

To the realists, empirical things have a limited real extension. They are created by nature, by the will of sentient beings or the power of God and are made up of atoms to form real entities. This individual entity resides simultaneously in their own multitude of atoms, i.e. a reality that is residing at once in many places. To the Buddhist, this whole, this extension is a fiction as one real thing cannot reside in many places at once. The whole is dependent on the simultaneous appearance of its parts for its existence. Only these parts, the point-instants are real.

The realist also believes that stability and duration can be proven by the fact that things endures and produces gradually a series of sensation one after another through our ability of Recognition. For example, cognition of the pattern, ‘this is that same person I have seen before’. To the Buddhist, there is already a linguistic fallacy in the judgment. The element ‘this’ refer to the present, a sensation and to a real object. The element ‘that’ refers to the past, it is produced by our imagination from our memory. The element ‘this’ and ‘that’ are two completely different elements which have nothing in common. Their unity cannot be reconciled. If such things could be identical, there is no reason why the whole Universe should not be composed of identical things.

The function of memory is limited to the past and cannot grasp the present moment. So is sensation, whose function is limited to the present and cannot apprehend the past. Memory and sensation have their own field of actions and results. They cannot work in the field of the other. Recognition should not be distinguished from thought constructed memory which is not a direct reflex of reality. Thus recognition does not prove the existence of duration.

The realists also argued that time exist because it has dimension. It can be measured in terms of moments, days, months, and years. Nagarjuna pointed out that it is not possible to measure time. He maintained that non-enduring or non-static time cannot be measured, because it cannot be manipulated. Enduring or static time, although can be manipulated, does not exist. It is a creation of our intellect. To the Buddhists, time is composed of moments. Two or more things cannot be related unless they are in simultaneous coexistent. Hence, if present and future are held to be dependently related to the past, then both present and future should exist in the past. Otherwise they cannot be contingently related. If a thing can exists for more than a moment, than there is no reason why it cannot survive and exist for eternity, which is not possible. On the other hand, present and future could not exist without being contingent on the past. Hence, according to Nagarjuna, there is no justification for the recognition of a present and a future time. If a thing can have real duration through several moments, it would represent a real unity existing at once at different times.

Thus to the Buddhist, ultimate reality is timeless, spaceless and also motionless in the sense of having no duration, extension and no movement. It is a mathematical point-instant, an action of efficiency.