Singapore -- The Buddhists of the logical school were sufficiently clear in their eliciting on the problem associated with Ultimate Reality. Real to
them is the efficient. The ideal is the constructed, the imagined a
creation of our understanding. 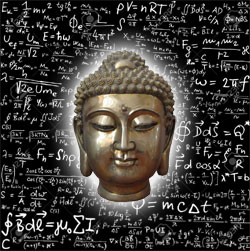 The non-constructed is the real. The empirical thing is a construction of our imagination based upon the basis of a sensation. The ultimate real is that which correspond to a pure sensation. Although the empirical thing is a product, a mix of a sensation and the imagination that follows, we can separate the part that is pure reality and of pure reason in our cognition. It is only after this separation can we realized in thought and speech the part
of our cognition which is constructed by our imagination. But of reality, we can only identify the characteristics of it and not reality itself. Even when reality itself is inexpressible, we can still express it by its characteristics.

Cognition of a pure object by our sensation is purely passive. It is unique on its own, unconnected in whatsoever way with all other objects of the universe. It is absolutely dissimilar to all other objects. It has not extension in space and no duration in time although an indefinite sensation can produce an image of an object localized in time and space. But this is just the construction of our Understanding localizing the object in space and an imagined time.

The reality is a point-instant having no parts between the preceding and succeeding point-instants. It is ultimately simple, indivisible, a pure existence. It is efficient and it stimulates our understanding and reasoning to construct images and ideas. It is transcendental, unutterable, a particular, a ‘Thing-in-Itself’. An object which is not connected with a sensation, with sensible reality is either pure imagination a mere name or a metaphysical object.

All objects of cognition are divided into general or individual, a universal or a particular. The particular alone is real the universal is an unreal object, a mere name. The general understanding by students of logic assumed such term as a man, a horse, a house to be a
particular. To the Buddhist logicians, only the underlying sensible point-instant of efficient reality of these objects are considered as the particulars. These point-instants are the ultimate ‘Thing-in-Itself’. Such things as a house, a man are considered as universals objects as they are constructed by our understanding. The particular and the universal is a negation of one and another. They are correlated as the real and unreal, the efficient and the
non-efficient, the constructed and the non-constructed, the utterable and unutterable, the external and internal, the non-dialectical and dialectical, the ‘Thing-in-Itself’ and the phenomenon. Thus to exist means to be a particular i.e. to be a being is to be one being.

Thought constructed objects or ideality can be express in a name, it follows that reality as a contradictory opposed thing to ideality is something that cannot be expressed in speech. It has neither any position in space and time, nor any quality, it cannot be expressed as in itself there is nothing to be expressed except that it can produce an indefinite sensation. The first moment of a sensation is the real moment that produced a fresh cognition. The senses in themselves cannot produce any cognition. It is not capable of imparting any definiteness. It is the understanding that process all further work associated with the object from the information supplied by our senses. It is the conception that arises from our intellect that can
be expressed in speech.

Another characteristic of ultimate reality is the fact that following on the sensation, the image produced is a vivid one and not vague as in an image produced from memory or name of the object. The vividness of a sensual image is something quite different from the clearness and
distinctness of an abstract thought or of a memory representation. It is like the image produced from actual watching a football match and one seen indirectly on the TV screen. One has the actual sensuous experience which is not felt at all in the other. Vividness and
vagueness is not a matter of degree, vagueness is an intrinsic property of all mental construction which can never seize the object in its concrete vividness.

All elements of the external world are mere forces which stimulate imagination, they are dynamic. When a leg is broken by a stick, real is only the fact that it is broken. The leg, stick and the action are our interpretation of that fact by our imagination. The real is only that particular point-instant. Our image of the leg, stick and action is only an effect product by that external efficient reality.

It is in this second period of the Mahayana, that ‘Thisness’, the Absolute Reality is the ‘Thing-in-Itself’. Here, the differentiation into subject and object by our intellect under the influence of karma constitutes the world process. Its non-differentiation is Nirvana.

When subject and object coalesced in the Final Absolute, when there is non-duality, it is the unutterable eternity of pure existence and pure consciousness. This is the final stage to the Vedantins, when pure sensation apprehends pure Existence or the Absolute Brahma. The theory of a ‘Thing-in-Itself’ was not accepted by all Buddhist schools, such as the Madyamikas. To them all logical conceptions of finite and infinite, divisible and indivisible etc were contradictory and dialectical without exception and therefore are unreal.

The ‘Thing-in-Itself’ means there is a thing which is characterized by its own self. In the Buddhist spiritual sense, this is still not the final stage of deliverance, it is still dependent originated. For final deliverance to be arrived at, Emptiness of all Emptiness, i.e., the inexpressible has to be eventually realized intuitively.

In summary, the conception of Ultimate Reality implies that it represents; the absolute particular, it is pure existence, a point-instant in the stream of existence. It is unique and  unrelated it is dynamic without extension and non-enduring. It possesses the ability to stimulate the intellect in the production of a corresponding image. It imparts vividness to the image produced. It is the ‘Thing-in-Itself’, unutterable and not cognizable.