New York, USA -- I knelt on the silken scarf laid across the hardwood floor, my head bent in silent prayer to the spirits of my ancestors. I heard muffled sounds of chanting monks through the old music player at the side of the decaying red shrine. 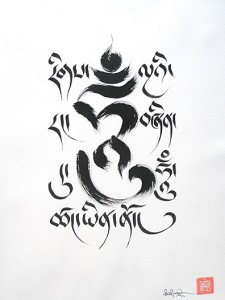 There was no silence on Saturday morning for me. A little after the crack of dawn, my grandmother would rise and kowtow to our ancestors and pray for a better life for our family. It wasn't that we didn't already have a good life, but the promise of a better life was reserved for those who could make the effort to sacrifice an hour of their sleep. Only then could we acknowledge and appreciate the work of our predecessors who brought us into this world.

My grandmother spoke in her native Fujianese tongue while we kneeled. Although I was fluent in the dialect, I found the words translating into English in my head. For a brief moment, I wondered how and why I could understand something spoken in so many different ways, and whether the physical sounds of language were a manifestation of something much bigger. For instance, I could not understand anything in the recording of chanting monks, yet I understand their sentiment perfectly. They could have been singing gibberish, but the meaning resonated with me.

There is a concept known as the Buddhist Theory of Language, which is a theory that all aspects of language are derived from a combination of interlocking traits, such as impermanence and the realization of transience, present in all forms of communication. Although the concept is not uniquely Buddhist, it derives its roots from Buddhist concepts of the Four Noble Truths and arbitrariness. The former explains that all temporary states are unsatisfying, yet we continue to crave them, and that only following the Noble Eightfold Path will relieve us from this craving. The latter explains that self-determination gives meaning to life, and prevents us from the arbitrary powers of an external force, such as random chance.

Linguists have described the root of language as suffering. In the Buddhist sense of the term, suffering represents an acknowledgement of spiritual hardships. It comes from a sense of responsibility: to take control and place yourself in a position that you cannot escape. According to the Four Noble Truths, in creating language, we pursue the idea of a temporary meaning that we crave to control and use to represent our own thoughts and feelings. However, in order to achieve true inner peace, we have to cease in this craving. Only then may we achieve peace. Therein lies the difficulty. This sense of separation and need to control is essentially what many feel drives them. To eliminate such a need requires the redefinition not only of one's mindset, but of one's very life.

We Buddhists are taught that it is essential to become aware of this suffering in order to fully appreciate our lives. Since grade school, we are taught that using kind words and treating others well equate to duty and responsibility. Although following these duties may not seem to be an act of "suffering", we are acknowledging that we cannot exhibit total and complete free will. We have a responsibility to hold others up to a similar standard that we hold ourselves and we recognize this as duty.

This responsibility towards others is exemplified through the use of the Eightfold Path, a concept in Buddhism that acts as a guidebook for a path in life that will lead to the end of suffering. The third factor of this path is known as Right Speech: individuals should take responsibility for what they say, not use their words too negatively, and speak only words that will do no harm.

While Buddhism is traditionally thought of as a religion, it plays a broader role for those who follow a Buddhist lifestyle. It serves as a guideline for a life that explores the reasons for our existence and presents methods for better understanding the unsatisfactory nature of many of our everyday experiences. Similarly, according to the Buddhist Theory of Language, language is simply an outline of our communication, not the communication itself.

Another concept in Buddhism is emptiness, the belief that nothing comes into existence by the power of itself, and that impermanence and change are fundamental. The Buddha showed through his teachings the true nature of conditioned existence and, depending on the sect of Buddhism one followed, presented various methods for leading a flourishing life. In terms of how we communicate, sounds and meanings are just as empty as the impermanence of existence. Sounds are essentially waves vibrating particles of air, and meanings are simply ideas we give to certain thought processes that somehow allow us to conceive of incredibly complex ideas. To Buddhists, this means that sound and meaning are both impermanent ideas. We should seek to not develop our perception of language around such arbitrary external states. Instead, we should recognize that language is all-encompassing. It is not an understanding of sounds or objects, but an indescribable entity that represents our thoughts in a comprehensible form.

While certain combinations of sounds may mean one thing in one language, another combination of the same sounds could mean something completely different in another. Even the same combination of the same sounds could mean radically different things, depending on who you ask. The words written on this screen might hold meaning for you, but they could easily appear as scribbles on a brightly lit wall for those unfamiliar with written English. Nevertheless, the ideas that these words represent exist. Certain permutations might not exist for people in different cultures not exposed to the same ideas as us, but the ideas can still be manifested by the human mind. Thus, it brings up the question as to why language is so necessary in the first place, and why we chose speaking and writing as our primary means of communication.

That different aspects of language can simultaneously be arbitrary and meaningful is astounding. Interdependence is a concept in Buddhism that describes how the different elements in the world relate. Just as we learned to speak from our parents, and they from their predecessors, we are constantly influencing those around us. Languages weave in and out of human existence, building upon earlier generations of languages and influencing newer generations to come.

My traditions as a Buddhist remain more religious than secular, but I believe that even the religious aspects can be meaningful in secular contexts. Rather than viewing the Noble Eightfold Path as a distinctly Buddhist concept, applying the actions to everyday life can have just as much impact. Following the concepts taught by Buddhist monks is not akin to believing in a higher-order deity or in spirits that may dictate our actions. Rather, Buddhist beliefs are more of a guide for how we perceive our world, and how we can make our own impact, even through actions as small as saying a few words.

Even today, I relish the early mornings spent by my grandmother's side. Although the words fly off my tongue like silken thread, I still fail to understand their true meaning. And it doesn't matter. Knowing that all languages are interconnected is a soothing understanding, because rather than fighting to comprehend the various clicks and slurs, it is far easier to comprehend the spiritual undertones of the phrases. Just as the Buddhist Theory of Language holds that all languages are simultaneously meaningless and meaningful, I understand now that it doesn't require academic knowledge to understand the language of Buddhism. Rather, it requires understanding in my heart.

As I close my eyes, clasping the reed-thin stick of incense between my fingers, I let the songs and chant wash over me, the sweet smell of burning herbs enveloping me, allowing me to slip into a spiritual experience. The words themselves, after all, are just sounds vibrating through the air. What they represent is more than their external manifestation. They represent harmony and interdependence, the cornerstone of Buddhism, language, and society.