Fed up of romance sims? Buddhist-themed visual novel coming to Android and iOS

Tokyo, Japan -- There’s already a whole bunch of dating sim titles aimed at both men and women available to play on your phone or tablet. But for those who are fed up of sappy, cliché boy-meets-girl stories there’s a new addition to the growing range of visual novels available on mobile platforms that is set to tell a unique story focusing not on romance, but on the Buddhist religion.

A visual novel game with an interesting premise is coming soon to Android and iOS. For those of you unfamiliar with the genre, visual novels are similar to choose-your-own-adventure games, where you follow a story and are occasionally offered choices that will shape the direction it takes. Romance simulation stories are probably the most popular type, where the protagonist can choose which character they want to romance from a selection of gorgeous girls or guys.

However, upcoming title Mori no Seija (Saint of the Forest) has a unique premise, telling the story of a young Japanese man going on a trip to Thailand to train as a novice monk. While the Westerner coming to Japan for the first time trope has been a popular theme in Japanese-made visual novels for the Western market, such as Go! Go! Nippon! and Tokyo School Life, it’s interesting to see a Japanese protagonist heading to another country. Along with what is hopefully an engaging story, the game will be visually enhanced by vibrant illustrations from artist Yamada Satoshi. There will also be an educational side to it as, through experiencing the story, the player will be able to learn the basic tenets of Buddhism, and how to follow Buddhist practices in their daily life.

The developer, RhinocerosHorn, has previous experience working in the game industry, and also has a personal interest in Buddhism after reading a book by Alubomulle Sumanasara, a SriLankan Theravada Buddhist elder who has taught in Japan for many years. RhinocerosHorn’s aim is to create a game that people can enjoy while also realizing the fundamentals of Buddhist teaching.

Below are some screenshots from the game.

This character, referred to only as ‘Thai Girl’ in this scene, explains that most men in Thailand train as novices for a short time. 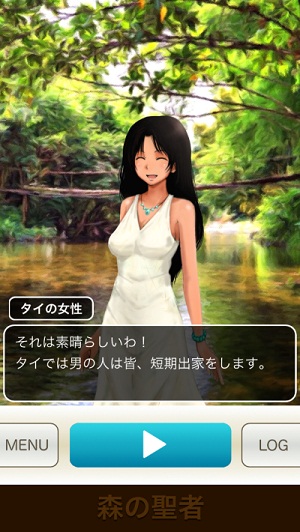 The elder says that you still seem to have a lot of ‘abhinivesha’, or attachment to life. 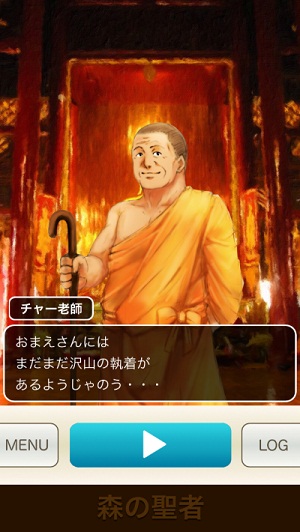 It seems like there will be some kind of leveling-up system for your character, possibly based around meditation practice. 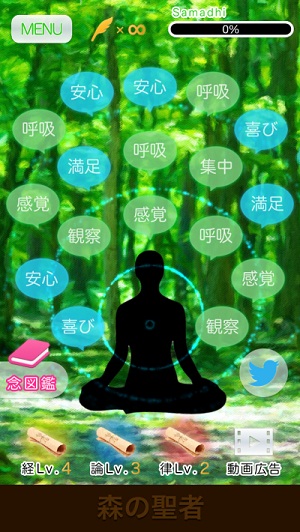 Mori no Seija will be free to play and will be coming to the iOS and Google Play stores in September. It will be released in Japanese only, but perhaps if it does well there could be the potential for an English language release in the future.