Are Your Blessings Going Up In Smoke?

The lay Buddhist precepts are
encouraged for all to uphold always,
especially in times being tempted,
by greed, hatred and delusion.
- Stonepeace 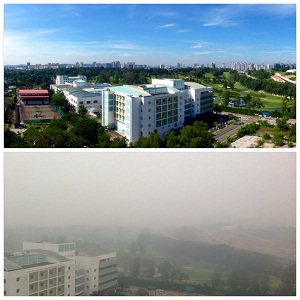 According to the Brahmā Net Sūtra’s (梵网经) 'Fourteenth [Secondary Bodhisattva] Precept Against Setting Fires For Burning' ('第十四放火焚烧戒'), Śākyamuni Buddha (释迦牟尼佛) taught the following – 'If [as] Buddhas’ [Bodhisattva] disciples, with evil minds thus setting great fires, burning mountains, forests, open fields and the wilderness, from the fourth [lunar] month up to the ninth [lunar] month setting fires, if burning others' families' houses and residences, cities [towns], the Saṅgha's [Buddhist monastics'] abodes, fields and trees, or ghosts' and gods' official properties [e.g. places of worship and residence], all items with owners, [they] should not thus burn. If thus burnt, [they] commit a light defiled misgiving.’ ('若佛子，以恶心故放大火，烧山林旷野，四月乃至九月放火，若烧他人家屋宅、城邑、僧房、田木，及鬼神官物，一切有主物，不得故烧。若故烧者，犯轻垢罪。')

Although the above is a Bodhisattva precept, the rationale for observing it applies to all, especially to those who do not bother much about the damage they do with destruction of nature and property. Even though a secondary precept, it is not necessarily light as a misgiving if effects of breaking it are serious. Looking more deeply, to set fires 'with evil minds' means to do so with the three poisons of greed, hatred and delusion. (Greed and hatred arise together from delusion.) For example, the rampant heedless slashing and burning to clear and 're-fertilise' lands for growing palm trees for oil, that creates seasonal regional smog (haze), arises from greed for making easy money at the expense of the environment. This also arises from passive hatred in terms of wilful disregard for the welfare of all sentient lives involved. (Direct burning of others' homes and properties would be plain arson or vandalism.)

When lands are razed, not only is vegetation destroyed, also injured, killed and displaced are countless insects, birds and even big animals (e.g. orangutans), along with ghosts and terrestrial gods, some of whom dwell naturally on trees and such. Of course, humans too are adversely affected, with nearby residents and even those in neighbouring countries becoming sick with inhalation of air pollutants.

Those already with respiratory and heart problems can have their conditions aggravated too. All these arises from delusion, imagining how havoc inflicted on nature will not karmically rebound due to our interconnectedness. The truth is, all natural disasters that harm humans are karmic repercussions of man-made ones. In fact, the long-term ills of such pollution means the global climate crisis will go on, with its harms perpetuating to future generations.

With compassion and wisdom, we must respect and protect habitats and lives of all beings seen and unseen, big and small, and even vegetation, without which there will be no harmoniously shared elements – not even basic fresh air! While olden times use controlled burning to clear land, that done nowadays for large-scale profiteering is reckless eco-terrorism.

Though clearing in the twelfth month is allowed in Buddhism, it is only after mass-chanting of prayers while circumambulating the area to urge its beings to leave. Of course, there should be as little burning as possible despite time or place. As the period in the precept is spawning time of many creatures amidst lush vegetation in India, fires then would take many lives. Thus, in the monsoon season (from mid of the fourth to mid of the seventh month), the Sa?gha has rains retreats indoors to avoid accidentally trampling on insects and saplings, to diligently focus on spiritual cultivation instead.

As consumers, even if we play no part in the direct indiscriminate burning, we can still live up the above precept by not supporting palm-based products from unsustainable sources. We ought to read the ingredient lists of foods and other consumables mindfully, to avoid not responsibly certified palm oil (or 'vegetable oil', which is usually palm oil).

If we neglect the truth that we are part of the supply and demand cycle for destruction of the environment and sentient lives, we would instead be breaking the precept in spirit, even if not in its letter. We would be as if 'burning away' our blessings each time we consume blindly. Since the widespread and increasing profitability of palm products is due to high consumption, when our buying lessens, destruction for selling will lessen too. Now that we face this environmental disaster, it is up to us to turn our collective negative karma around – together!

What you do or not do now
creates or destroys
your blessings now.
- Stonepeace