San Francisco, CA (USA) -- In 2007, Bhikkhu Bodhi was disenchanted with a growing trend he saw in the American Buddhism community. The Theravada Buddhist monk, the author of several influential translations of Buddhist texts, was happy that Buddhism was growing and becoming popular in the US, but he was troubled with what he saw as the community’s emphasis on self-fulfillment at the expense of empathy for the greater world–Buddhism in a vacuum, essentially.

He penned an editorial about the topic in the magazine Buddhadharma, titling it “A Challenge to Buddhists,” and implored readers to do more to fight global suffering, declaring that:

“The special challenge facing Buddhism in our age is to stand up as an advocate for justice in the world, a voice of conscience for those victims of social, economic, and political injustice who cannot stand up and speak for themselves.” 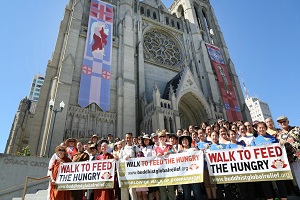 Bodhi’s editorial sparked a major response in the American Buddhist community. Many felt the same, and wanted to channel their energy into actionable charity work. In 2009, Bodhi and others created Buddhist Global Relief (BGR). They see the ultimate work of Buddhism as helping others and ending suffering, and point out that Buddha himself spoke out against hunger: in the Dhammapada, one of the most widely read collections of his writings, Buddha said that “Hunger is the worst illness.”

The nonprofit works on long term solutions to ending poverty and hunger, and helps communities create their own sustainable food sources, rather than creating an endless cycle of food dependence. They’ve built wells in Cambodia, provided deworming medication in Niger, and promoted the health benefits of breastfeeding in Côte d’Ivoire. The group also focuses on promoting women’s education and economic power worldwide, which they see as a crucial step in eradicating the inequities that lead to hunger and poverty.

One of BGR’s most popular events are the annual Walks to Feed the Hungry, which take place in cities across the US ranging from Milford, Michigan (population: 6,175) to Los Angeles (3.8 million). The money raised by the walks goes to both the group’s international projects as well as a local charity chosen by the group’s members.

On October 24, BGR will host its walk in San Francisco (there’s also a San Jose walk this Sunday,  October 11). The walk will be led by Ayya Santussika, an Indiana born Buddhist nun who moved to Mountain View to become a software developer and became inspired by the area’s vibrant Buddhist community. Part of the funds raised by the walk–last year’s walk raised more than $13,000–will go to San Francisco’s Project Homeless Connect, which provides food and health care to vulnerable populations.

These walks have been going on in San Francisco since 2012, but this year’s event is particularly special. Bhikkhu Bodhi–the man whose impassioned editorial started the organization–will be attending.

“That’s a big honor,” said Sonali Aggarwal, the organizer of this year’s San Francisco walk. “This is going to be even more special. [Attendees have] been just reading his books and now they can personally meet him.”

Buddhism has enjoyed a long history in San Francisco, thanks to its large communities of Asian immigrants, who each brought their version of the religion and helped spread it across the US. The 3.3 mile walk echoes this history, with a route that winds through the city’s Asian neighborhoods and serves as a walking timeline of Buddhism’s spread throughout Asia.

“[Buddhism] came to America last, so we go to the Mindfulness Center last,” said Aggarwal. “We start in Chinatown, Japantown, the Vietnamese temple, in a similar fashion to how Buddhism spread in Asia. We are following the same pattern.”

People can help the group’s work by donating or volunteering, and if they’re interested in the walk, signing up a group for the event and finding sponsors.

Aggarwal hopes the event will appeal to people who are attracted to the now zeitgeisty ideas of mindfulness and want to learn more about its Buddhist roots–not to mention have a fun day enjoying a sunny walk through some of San Francisco’s most beautiful places of worship.

“It’s a great way to have fun, meet like minded people who are interested in both meditation and seeing how Buddhism started and spread around in the world, and also help out with the global relief,” said Aggarwal.