Dhamma for Asking - New monks are just like newly-delivered infants

Bangkok, Thailand -- Before laypeople ordain as monks they know how to do all sorts of things. After they ordain, they don’t think it is necessary to study, to stay and train under a meditation master. They think that they can go ahead and practice by themselves. Nowadays monks ordain and do not stay with a meditation master, but instead establish a meditation centre with themselves as an abbot. 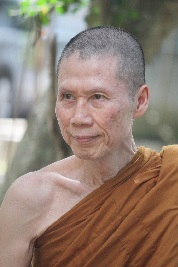 After not too long we hear about some scandal. This is because they have not studied under a meditation master who could teach them the proper way to live as a monk. People who have only recently ordained cannot yet be considered real monks; they are only monks in appearance. They shave their heads and put on an orange robe, but their minds are the same as the average person.

It is as Luangta Boowa has said, “Our defilements have no fear of orange robes and bald heads. Don’t think that by just having shaved your head or by wearing an orange robe that the defilements will immediately die. Defilements are still full within the heart.” So it is necessary to study with a meditation master, to learn how to overcome the defilements, the correct way of living as a renounciant, how to behave and how to follow the Vinaya that includes 227 training rules, and to learn how to practice Dhamma correctly.

Learning all of this requires an extended period of time of at least five years. For those staying with Luangta Maha Boowa, monks with fewer than five rains retreats would not be allowed to go out. In addition, some monks were not allowed to leave, even though they had stayed with him for more than five years already. If he saw that they were not ready to live by themselves, then he wouldn’t let them go.

This is because new monks are just like newly-delivered infants who have to stay with their parents. They have to first be taught by the parents how to eat, use the bathroom, walk, sit, stand, and do all sorts of things before they are mature adults who can understand and handle various situations.

In general society people have to be 21 years-old before they are legally independent. In the same way, monks must first study the theoretical aspects of the Dhamma and Vinaya. They learn how to act in only moral ways befitting a monk, which has to go hand in hand with the mental aspect of the meditation practice, the path of Dhamma. What we learn from listening to Dhamma is actually both Dhamma and Vinaya.

Vinaya refers to morality, and Dhamma means the teachings that can enable us to practise the path and achieve the fruit of Nibbana. Therefore, it does not matter whether we are monks or laypeople. If we want to progress on the Buddhist path, it is necessary to study and learn.

Laypeople need to study under a meditation master just like monks do. Once they have a meditation teacher, they will be able to correctly understand various matters and use their knowledge to meditate in the right way, leading naturally to positive results.
TOP