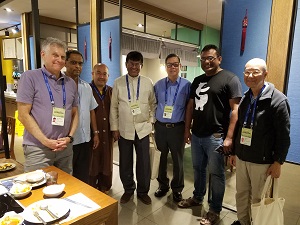 It was a full day Conference.

One of the Resolutions adopted at the Conference called upon the Govt. of Sri Lanka to take immediate steps to have the Animal Welfare Bill enacted without delay. It said that it would be tantamount to an inexcusable lapse if Sri Lanka were to celebrate in year 2017 the UN Day of Vesak at an Inter - Governmental level, without extending appropriate legislative protection in line with Buddhist values and Sri Lanka's historical animal friendly cultural heritage, and modern standards of care and treatment, to animals.

The keynote speaker was the well-known Buddhist monk and animal advocate Venerable Master Hai Tao from Taiwan. He spoke on Compassion for All Beings.

Other speakers were who presented at the conference were:

1) DVA President, Bob Isaacson who spoke on the Buddha’s Teachings on Sentient Beings and How We Can Live Kinder.

2) Dr. Chamith Nanayakkara (Veterinary Surgeon and Chapter leader of the Kandy Chapter of DVA in Sri Lanka ) who with his team have generously given free treatment to more than 50,000 animals

Dr. Nanayakkara raised the question, is it consistent with Buddhist teachings for humans to kill animals in response to overpopulation? Instead a method consistent with the Dhamma is readily available: the spraying and neutering of dogs, cats and other animals.

4) Professor Chang-gil, Park ( Ph.D.) of Sungkonhoe University, Seoul and President of Voices for Animals. He spoke on the topic ' What can Buddhist organisations do to protect world laboratory animals?"

5) Film Director Ms. Yun Hwang (who has  made a documentary film on introspection of the modern livestock industry and its interaction with Animals). She spoke on the topic 'Mercy and Peace of Eating'.

There were two workshops  held at the conference: the first focused on Advancing the Cause of Animal Rights in the Buddhist Community and the other at the end of the Conference dealt with the moral issue of  Living Kinder and Eating Kinder – using what was learned at the Conference for the Welfare and Happiness of All Beings.

A vegan Lunch which was entirely plant-based (no animal foods) and reflecting Korean cultural tradition and cooking was served to the delight of visitors from overseas.