Buddhism, Science And The Western World

New York, USA -- Thanks to the work of the Dalai Lama and others, Buddhism can seem far friendlier to modern, scientifically minded sensibilities than the Abrahamic religions. This alignment with science is strengthened by the widespread adoption of mindfulness techniques - often derived from Buddhist and other contemplative practices - in domains like medicine and psychology. 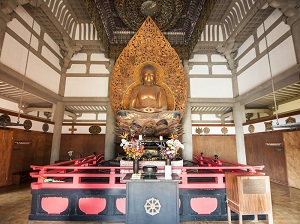 So with its supposed empirical emphasis on internal investigation, one might wonder if Buddhism is really a religion at all or, at least, in the same sense as Western monotheistic traditions. Maybe it's better described as a kind of "science of happiness?"

Robert Sharf is a scholar of Buddhist studies at UC Berkeley and he has, apparently, heard this kind of question before. I was recently introduced to Sharf's insightful writings via discussions about Buddhism and cognitive science with philosopher Evan Thompson, who has been doing his own work in these domains. For Sharf, the easy identification of Buddhism as a kind of inward-directed science of the mind represents a particular reading of its long and diverse traditions. Most importantly, what we get in the West is, for Sharf, a kind of "Buddhist Modernism." In particular, the affinity Buddhism is supposed to have with science is, for Sharf, a very specific consequence of Buddhism's historical encounter with the West - and to miss that history would be to miss the richer veins of meaning in Buddhism as a religion.

In a 2007 interview with Tricycle magazine, Sharf pointed to the response of Buddhists in countries like Japan and Sri Lanka during their encounters with Western culture in late 1800s. These nations were already being rocked by modernization and/or colonization. At the same time, the West was undergoing its own religious transformations. According to Sharf, Protestants during this period were confronting a "crisis of faith" due to the rise of science. This led to new ways of thinking that tried to mesh Christianity more smoothly with science and its rational worldview. In this way, a confluence of Asian and Western interests began that would help shape a new vision of Buddhism. As Sharf puts it:

"...the critiques of religion that originated in the West resonated with [Buddhist's] own needs as they struggled with cultural upheavals in their homelands. [While] for Westerners, Buddhism seemed to provide an attractive spiritual alternative to their own seemingly moribund religious traditions. The irony, of course, is that the Buddhism to which these Westerners were drawn was one already transformed by its contact with the West."

It is this transformed tradition with its affinity with science that modern Americans are encountering.

Sharf is not the only one to make this point. In his book The Scientific Buddha Donald S. Lopez, Jr., a professor in the department of Asian languages at the University of Michigan, also sees a lot of selection in what comprises Western Buddhism. In his words:

"For the Buddha to be identified as an ancient sage fully attuned to the findings of modern science, it was necessary that he first be transformed into a figure who differed in many ways from the Buddha who has been revered by Buddhists across Asia over the course of many centuries."

Of course, by its very nature, religion, all religions, are changed by their encounters with new cultures. This is particularly true of Buddhism and its steady march eastward from its birth in India 2,500 years ago. Religions always have a way of outgrowing their own scriptural and ritual basis, while simultaneously holding on to them. As author Karen Armstrong has shown, practitioners in any age are always selecting out those parts of their religions that are meaningful to them while ignoring the parts that seem dated. She called the process "creative misreading."

Sharf has no problem with the creative misreading that allows Buddhist Modernism to share space with scientific worldviews. "My concern," he told Tricycle, "is not with the selectivity of those who read Buddhism as a rationalist and scientific religion - it is perfectly understandable given the world in which we live. It is really not a question of misreading. It is a question of what gets lost in the process."

Part of the problem for Sharf and others is that by focusing only on the domains of inner experience (i.e. mindfulness via contemplative practice), Buddhist Modernism loses aspects of its function that were central to its history. "Look at how suspicious many Western Buddhists are of religious ritual," he says in the Tricycle interview, "... when we downplay ritual, we risk weakening our bonds to community and tradition. That's a pretty major loss."

But just as important for both Sharf and Lopez are the tensions that they think should exist between the Buddhist and Western worldviews. As Lopez puts it:

"If an ancient religion like Buddhism has anything to offer science, it is not in the facile confirmation of [science's] findings ... the Buddha, the old Buddha, not the Scientific Buddha, presented a radical challenge to the way we see the world, both the world that was seen two millennia ago, and the world that is seen today."

Sharf is specific in terms of the challenge he thinks Buddhism presents the sciences' presumed philosophical basis. "In order to make Buddhism compatible with science," Sharf says, "Buddhist Modernism ... accepts a Cartesian dualistic understanding of the world." This Cartesian separation would, he claims, be pretty weird to most Buddhist teachers throughout its history. As he puts it:

"Traditional Buddhist epistemology, for example, simply does not accept the Cartesian notion of an insurmountable gap between mind and matter. Most Buddhist philosophies hold that mind and object arise interdependently, so there is no easy way to separate one's understanding of the world from the world itself."

Keeping these differences at the forefront is important for Sharf because, he claims, they offer possibilities of generating something more truly original. "In discarding everything that doesn't fit with our modern view," he says, "we compromise the tradition's capacity to critique this modern view."

I'm someone interested in how philosophical traditions from India and Asia might add new dimensions to some key debates in science. In that sense, I have always been sympathetic to Buddhist Modernism and am interested in the Scientific Buddha.

But I also believe scholars like Sharf, Lopez and Thompson all have a lot to teach us with their close reading of Buddhism's philosophy and history. As Sharf himself points out, we don't have to "argue for a naive acceptance of Buddhist epistemology and cosmology" to be informed about the best ways to realistically engage with its philosophical insights. "But," as Sharf says, "we won't see what Buddhism has to offer if, at the outset, we twist it out of shape to make it conform to contemporary norms."

----------
Adam Frank is a co-founder of the 13.7 blog, an astrophysics professor at the University of Rochester, a book author and a self-described "evangelist of science." You can keep up with more of what Adam is thinking on Facebook and Twitter: @adamfrank4
TOP