Buddhism is my religion, not your decorations

People should take the time to learn about Buddhist symbols before using them as decoration.

Philadelphia, Pennsylvania (USA) -- \As a freshman, I’ve spent the past few weeks getting used to my new home at the Edge and visiting other students’ dorm rooms. It’s been an exciting and eye-opening experience so far, but there is one issue I’d like to address. 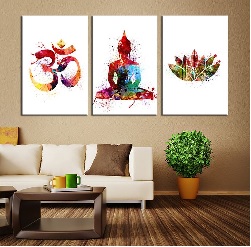 In a short time, I’ve already seen tons of tapestries hanging from students’ walls and Buddha statues sitting atop desks. Being a Buddhist myself, I’ve come to question whether any of these people actually know anything at all about my religion.

Buddhist symbols are not simply decoration for your living space. They have religious significance.

Being a Buddhist is about using positive energy from within and releasing it to yourself and those around you. Buddhists believe in self-fulfillment and the journey to achieving it through peace, meditation and self-reflection.

If people wish to decorate using elements from Buddhism, they should, at the very least, educate themselves on Buddhist religious beliefs, or refrain from using these items at all.

“People should not do this if they don’t understand and they don’t know the meaning of it,” Rath said.

Rath said by displaying a religious symbol or object purely for decoration, there’s a chance somebody can accidentally represent something that doesn’t align with their own beliefs.

I’ve seen many students using mandala tapestries as wall decorations without knowing that each design has a significant meaning.

For example, mandalas with concentric circles are meant for meditation. While meditating, Buddhists find it helpful to focus on the center of the circle to maintain concentration. Tapestries depicting a sun and a moon symbolize two opposites coming together.

If students choose to hang tapestries, they should at least choose carefully with the understanding of what their specific tapestry means and its purpose.

Marielle Halper, a junior communications major, isn’t a Buddhist, yet she still found it crucial to read about Buddhist beliefs after purchasing the two Buddha heads that she uses as decoration in her living space.

“I used to read up on some of the Buddhist laws, so I’ve familiarized myself with it, and I do love the laws and what they say,” Halper said. “Even if it was just simple Buddhist quotes, sometimes I just found that they really helped me with everyday life.”

But this isn’t always the case. I often see people not only with wall hangings but also with symbolic jewelry like bracelets and necklaces depicting Buddha’s face.

One of the most sacred symbols of the Buddhist religion is “om,” which is often used as a mantra during meditation practices. Om represents everything in life: past, present and future. This symbol is important to my mother and me, so much that we even got matching tattoos of “om” over the summer. When I see those who are non-Buddhist using this symbol without knowing its true meaning, it’s discouraging.

Students looking to learn more about the Buddhist items they may already possess could visit a meeting of the Soka Gakkai International Buddhist Philosophy Club, a student organization on campus.

Dawn Lomden, the Taleo system administrator in the human resources employment department, serves as the adviser of the club. Lomden said that not everyone who takes part in the SGI Buddhist Philosophy Club practices Buddhism. But students all come to learn about Buddhist symbols, talk about peace and create art.

“It reflects our commitment to a culture of peace, and it includes many artists who are not Buddhist,” Lomden said. “We generally dialogue about different topics, like, ‘Do we believe we can create a culture of peace?’ We talk about of course the Buddhist perspective, and of course everyone’s welcome to share their perspective.”

Using religious symbols as decoration without knowing much about them takes away meaning from those who actually use these symbols as a source of worship.

That’s why I’m asking that if you have symbols or decorations that represent the Buddhist culture in your living space, take the time to gain a  basic understanding of Buddhism and make sure you agree with the beliefs you’re representing.
TOP