NEW YORK, USA -- In a groundbreaking new study published Friday in The Journal Of East Asian Studies, a team of leading historians has proved that meditation originally spread from ancient China because a single, highly annoying monk went around telling everyone how much it had changed his life. 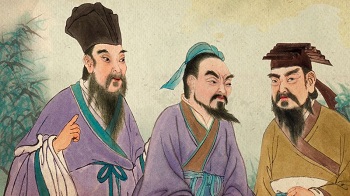 << Artworks of the period depict the monk irritatingly recounting how even after just a few days of meditation, he was already feeling more present in his own mind.

Analyzing documents uncovered across the Eurasian continent, researchers determined that the monk, who lived in the seventh century A.D. and learned rudimentary breathing and visualization exercises from a group of Mahayana Buddhists, traveled widely and talked constantly about how practicing meditation for only a week had fundamentally altered his personal outlook. From the Korean peninsula to the Central Asian steppes, he is believed to have aggravated people everywhere he went, inevitably shifting every conversation to the importance of mindfulness and being centered, even when it was clear no one was interested.

“There are mentions of an unbearably irritating monk in many texts from the period, and once we realized they were all referring to the same person, we were able to conclude that much of the Eastern world learned about meditation from this one sanctimonious asshole,” said study co-author Sheila Ryan of New York University, explaining that contemporary accounts indicated the monk would travel the Silk Road via merchant caravan, nagging his drivers about the value of observing one’s negative thoughts without resistance or judgment. “For example, scrolls from Asuka-period Japan indicate the island nation’s first exposure to the practice was this monk droning on and on about all the insight he’d gained from a weekend spent meditating in Tibet.

“Our research shows that from Mongolia all the way down to Java, everyone hated this smug prick,” Ryan added.

In the fragments that remain of their written correspondence, traders who traveled the same routes as the monk remarked upon how every time a person said something negative, the exasperating little shit would invariably chime in with unsolicited advice about how they just needed to accept their worries for what they were and learn to appreciate the present moment. Three separate diaries found far apart from one another in present-day Cambodia, Bhutan, and Afghanistan independently verify that whenever the monk bragged about his morning meditation routine, people secretly wanted to punch him in the face.

According to the historians, the evidence they amassed has allowed them to confirm that a figure who appears in several gombi-style paintings from the period is in fact this same monk. In one typical depiction, which places the monk in the ancient city-state of Srivijaya around 680 A.D., he is seen sitting on a mat and meditating in the middle of a busy market square as visibly annoyed passersby shuffle past, many of them appearing to shake their heads, roll their eyes, or stare at him in quiet derision.

To this day, scholars have observed, oral histories passed down for centuries in remote parts of rural China tell of a monk who pestered the fuck out of everyone he could find until they reluctantly agreed to attend his shitty introduction to mindfulness course.

“In his extensive travelogues, the Tang dynasty writer Yi Jing describes an episode in which a man we now believe to have been this monk continually disrupts a hard-at-work blacksmith with lectures about how the mind is a muscle that must be exercised just like any other,” Ryan said. “Apparently, the only thing this pain-in-the-ass ever talked about was how spending 10 minutes a day focusing on his breathing had made him more relaxed and productive. He kept badgering everyone to let him lead them through a guided meditation so they could see how great it was. Some people even tried it just to get him to shut the fuck up.”

“Our findings suggest he spread meditation to as much as 40 percent of Asia,” she continued. “He might have kept going, too, but after the monk told the Khmer emperor Jayavarman II that his empire would be much larger if he just tried a few simple stress-reduction techniques, he was beheaded on the spot.”
TOP