Patna, India -- Some time during the sixth century BC, a wandering ascetic sat to meditate under a tree in the vast plains of northern India, resolving not to rise until he had attained the ultimate knowledge of spiritual enlightenment. Thus began Buddhism, one of the world's great religions that originated in India and still exerts a magnetic pull for devotees the world over. 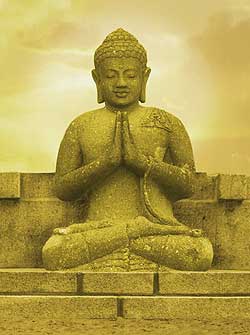 Buddhism today has made deep impact in places like the US. One consequence of Hollywood attention from people like Richard Gere --who found peace in Buddhism and whose emotional explorations took him from Zen to Tibetan Buddhism as enunciated by the Dalai Lama - is that Buddhism, especially the Tibetan strain, has entered mainstream America.

In fact, Buddhism is sometimes referred to as one of India's better-known exports to the world. The stream of people from across the world to the Buddhist centres in India continues.

In February this year, the spiritual head of the Tibetans, the Dalai Lama, inaugurated a three-day international conference to mark the2550th death anniversary of the Buddha near the site of the ancient university of Nalanda in the eastern Indian state of Bihar. Hundreds of delegates from 25 countries attended.

Brought up in luxury, the prince abandoned his home and wandered forth as a religious beggar, searching for the meaning of existence. The stories of his search presuppose the Jain tradition - the religion of 'ahimsa' or non- violence started by Lord Mahavira - as Gautama was for a time a practitioner of intense austerity, at one point starving himself almost to death.

Gautama was now the Buddha, or the awakened one, and he spent the remainder of his life travelling about northeast India, converting large numbers of disciples.

By the third century B.C., the still-young religion based on the Buddha's teachings was being spread throughout South Asia through the agency of the Mauryan Empire (ca. 326-184 B.C). By the seventh century A.D., having spread throughout East Asia and Southeast Asia, Buddhism probably had the largest religious following in the world.

Indian King Ashoka (273-232 BC), the grandson of the founder of the Mauryan dynasty, demonstrated his conversion to Buddhism by vigorously promulgating the religion across India. His edicts were carved on pillars of stone and wood, from Bengal to Afghanistan and into the south to Sri Lanka.

Since the 1840s, archaeology has revealed the huge impact of Buddhist art, iconography, and architecture in India. The monastery complex at Nalanda in Bihar was a world centre for Buddhist philosophy and religion until the thirteenth century.

The reasons for this disappearance are unclear, and they are many --shifts in royal patronage from Buddhist to Hindu religious institutions; a constant intellectual struggle with dynamic Hindu intellectual schools, which eventually triumphed; and slow adoption of popular religious forms by Buddhists while Hindu monastic communities grew up with the same style of discipline as the Buddhists, leading to the slow but steady amalgamation of ideas and trends in the two religions.

Buddhism began a steady and dramatic comeback in India during the early twentieth century, spurred on originally by a combination of European antiquarian and philosophical interest and the dedicated activities of a few Indian devotees.

The foundation of the Mahabodhi Society (Society of Great Enlightenment) in 1891, originally as a force to wrest control of the Buddhist shrine at Gaya from the hands of Hindu managers, gave a large stimulus to the popularisation of Buddhist philosophy and the importance of the religion in India's past.

A major breakthrough occurred in 1956 after some 30 years of the Untouchable, or Dalit, agitation when Bhimrao Ramji Ambedkar, leader of the untouchable wing within the Congress party, announced that he was converting to Buddhism as a way to escape from the impediments of the Hindu caste system.

He brought with him masses of untouchables -- also known as Harijans or Dalits -- and members of Scheduled Castes, who mostly came from western state of Maharashtra and from the Agra area in Uttar Pradesh.

Buddhist sites in India are a prime attraction for tourists across the world. There are between four and 16 principal Buddhist pilgrimage sites in India, with the most important located primarily in India's Ganges valley.

Lumbini, for instance, is one of the most important places of Buddhist pilgrimage located near the Nepal-India border. This is where Buddha was born to a royal family.

Another must visit site for pilgrims and tourists is Bodh Gaya where Buddha attained enlightenment at the age of 29. The Mahabodhi Temple marks Bodhgaya. A thriving Monastic Order continues in the area today.

Sarnath is another place in the valley where Buddha proclaimed the law of faith while Nalanda is important both because it was blessed with the presence of the Buddha and because of the famous monastic university that developed there.

Other commemorative monuments to the spread in Buddhism in India include Sanchi, Bharhut, Amaravati, and Nagarjunakonda where great Buddhist stupas and Buddhist university sites remain. Famous Buddhist cave temples, Ajanta, Ellora, Kanheri and Karli in western India are also major attractions as living symbols of a religion that has more meaning now than perhaps ever before.