New York, USA -- Scott is a civilian volunteer who regularly comes into the Sing Sing prison Dharma Song Zendo once a week and sometimes twice a week. I am a prisoner engaged in programs and activities that are geared towards personal enrichment. He's white and I'm black. It was our mutual karma that brought us together in conflict, neither of us seemed to have had much of a choice. 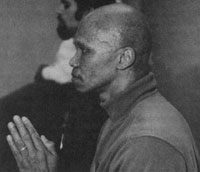 We both practice Zazen in the close quarters of the Sing Sing prison chapel basement. To date, Scott is the only white person I've ever gotten to know in more than just a superficial way.

The question which begs an answer is: Do we choose to remain preoccupied, stymied and stagnated by thoughts and feelings of hatred toward other races, for perceived past and present wrongs and injustices - or can we do something directly, on a personal level, about the situation?

When I first met Scott, I did not view him as an individual, nor even a human being. I saw him as a monster and a member of a race and class of people who has wronged my race and hurt me personally. I really didn't give him a chance to prove himself otherwise.

White people have done a lot of wrong to me personally, so I pre-judged him and blamed him for what I perceived other members of his race have done for me. I saw Scott as aloof, arrogant and condescending. He seemed to exude an air of superiority that I attributed to his white skin.

It seemed as if he felt he knew better than I the right way for me to live my life. This was reinforced with each new encounter between us.

It seemed to me that we looked at each other in challenging, derogatory or disdainful ways and engaged in passive-aggressive attacks on each other. One of my favorite ways of showing dominance and superiority over him involved sitting directly across from him in the zendo in a full-lotus position; I knew that he couldn't sit full-lotus. I used to gloat at the discomfort he would experience getting up from every sitting period. I sense that over time he picked up on my negative thoughts and feelings. This continued for some time back and forth between us.

One evening, all hell broke loose. It was on a night when Rev. Kobutsu wasn't able to come to the prison, and Scott, as I later found out, was left in charge. That night I twice unknowingly sat on the wrong cushion.

The first time was before the official sitting began. I got up, and when I returned Scott was sitting in the place I had vacated. I said nothing and sat directly across from him. He said that I was sitting in an officer's seat who helped conduct the service. I said, "No problem," and got up. I was mildly pissed, and commented to Scott that he really should try to speak up and not talk so low, and that he acted as though he was afraid. I told him if he had anything to say not to mumble, but to be a man.

Zazen began. I sat full-lotus. Usually we sit for only 35 minutes at a time, but on this particular evening we sat an additional 10 minutes. Anyone that has been practicing zazen for a while knows by the pain he begins to experience in his legs when the time is up. My legs and knees were screaming from sitting in a full-lotus for 45 minutes. During this extra ten-minute period, I began breathing deeper and harder in response to the pain. My breathing was audible to Scott. He said, "Control your breathing."

I broke the rule of no talking in the Zendo and challenged him "Try sitting full lotus as long as we were and see how you breathe." During kinhin he walked into the hallway and summoned me outside to speak with me. I told him, "Not now," but to wait until later. He requested the same thing twice more, and I responded in the same manner. He remained in the hallway until kinhin was over and everyone had sat back down on the cushions to begin another 35-minute sit.

Scott came into the zendo and turned the overhead lights on, and proceeded to lecture about how he would not tolerate disrespect in the zendo, and that I had a problem. I informed him that there were no children here, and that we were all men. The exchange went back and forth, and didn't really go anywhere. Finally, not really having any other place to go, I said, "if you want me to, I'll go." He acquiesced. As I was about to leave, Yogen, the inmate zendo leader, said that he was in charge, so I sat back down. Other prisoners within the zendo voiced their opinions. I told Scott he was behaving childishly.

He retorted that one of us was going to have to leave, and since I wasn't going anywhere, he left.

After he left, I was acutely aware each time I heard footsteps descending the stairs to the chapel-basement zendo. I though he might have informed the guards about what happened, and that the guards were coming to evict us. That didn't happen. Scott was gone and didn't return for a month afterwards. I really felt bad during that time; I missed his presence and hoped our interaction wouldn't be the cause of him discontinuing at the prison. I later learned hi hiatus was not a direct result of our confrontation.

The week after our confrontation, I spoke with Rev. Kobutsu about the situation. He was aware of the incident, having communicated with Scott during the interim. He pointed out that we were both at fault in the interaction, and that he himself was at fault for not informing the sangha of his intention of leaving Scott officially in charge during his absence. He commented that perhaps the confrontation could be an opportunity for us both to get to know each other and that we could write about what happened.

When Scott returned to Dharma Song Zendo, he and I began to work on developing an understanding of what had transpired between us. During the process, Scott became the only white person I've ever gotten to know. I'm glad that we had our verbal confrontation, because dealing with it gradually changed our attitudes toward the other. It brought about a sensitivity, respect, compassion and consideration that neither of us previously felt toward each other. It enabled us to reshape our viewpoints and share the same space without antagonism and competitiveness.

I'm beginning to understand the meaning of the phrase "Incomparably profound and minutely subtle." What occurred between Scott and me was profound. From that altercation, I learned that when we communicate with each other about our feelings and emotions, we can transcend our irritations. Through abandonment of pretensions and recognition of hang-ups, the door of transcendent wisdom opens.