Breakfast in a Zendo

San Francisco, USA -- On a recent Saturday morning I rolled out of bed and made my way to the San Francisco Zen Center for breakfast. The 1920s brick building, originally designed by Julia Morgan for young Jewish women in need of a place to live, is now home to a throng of gentle monks in what is the largest Soto Zen Buddhist congregation outside of Asia. I was there to experience the cooking of the tenzo—the Zen cook—and a meal called oryoki, which is an elaborate ritual that involves eating from three bowls of descending sizes. 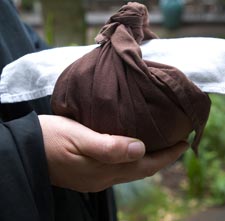 Inside, the mostly bald and closely-shaven, black-robed monks gathered in a circle with hands folded over their bellies, then quietly made their way downstairs to the meditation hall, cradling their oryoki bowls wrapped in white linens. In good form and silence they sat like Buddhas on their pillows, bowing and chanting, then bowing some more in a dance that went on for 40 minutes. One of the monks graciously gestured to me to follow his lead, showing me how to unwrap my bowl, where to place my spoon, how to hold the bowl when the meal was served, when to bow, when to chant and when to eat.

The food was simple but symbolic: polenta in the largest bowl (the portion to end all evil), buttermilk and bananas in the second bowl (a portion to cultivate all good) and toasted pecans in the smallest bowl (a bowl to free all beings). We ate in silence with chopsticks and wooden spoons. For me, each bite was a thoughtful gesture. And in silence, each bite had a luscious taste and texture. The tang of the buttermilk, the sweetness and softness of the bananas, the salt of the sesame seed condiment and the warmth of the corn meal were sensations mostly forgotten during my usual hurried breakfast, often a scone in the car.

At the end of the meal, servers with teapots filled the first bowl with clean water. Then each monk used a modified stick that had been included with his eating utensils to clean his bowl. They sipped the warm cleansing water to complete the meal, as if it were dessert, chanting: “This water we use to wash our bowls tastes like ambrosia.”

Oryoki translates as, “Just this would be enough.” Each movement leads to the next and nothing is wasted. With the ritual words and actions, and the specificity of the meditation hall that made it feel more like a religious ceremony than a meal, it was reminiscent of Passover Seder in the Jewish religion of my family, and the question, “Why on this night do we eat differently from all other nights?”

I mentioned this similarity to a former tenzo who told me that two of her teachers experienced eating in the zendo, the Zen meditation hall, as better than a feast they had enjoyed at the French Laundry in Napa Valley. I imagined two monks eating in splendor and excess during their five-hour dinner at the famed restaurant as a meditation practice—sitting for hours, relishing the gifts offered by the chef.

A Zen tenzo is not a chef per se, but as chief cook, he has one of the most important positions in the monastery. This is not to say the job follows a hierarchy (a tenzo also washes dishes), but it is reserved for senior monks or priests. In a Zen kitchen, where the food is secondary to the care and practice surrounding the preparation of the food and the desire to nourish the community, the job of the tenzo is about giving. As one tenzo explained it, her lesson in the kitchen was to know all that she could give without denying herself completely.

The tenzo manages kitchen conflicts between monks like a psychologist or a teacher—no one yells, voices are hushed and there is little talking. They prepare the menu, order provisions and even lead a prayer dedicated to the oven. The tenzo fosters the spirit from the mediation cushion and brings it into everyday practice, which is why the position of the tenzo is offered to senior monks.

Marin County’s Green Gulch Tenzo Rick Sloan explained that, “When work is done with a feeling of giving and sincere effort, although intangible, it’s nonetheless present and it resonates in the food.”

A good way to experience Zen cooking and the gifts of the tenzo is to visit one of the three practice centers around the Bay Area, where the three-bowl concept of the oryoki translates into the dining halls without the formality. Tassajara Hot Springs in Carmel Valley tops the list and is open to the public from April to September. It is organic vegetarian food at its best, served graciously and abundantly by the monks.

Green Gulch near Muir Beach in Marin County offers Sunday work programs that include meals in their dining hall. Like Tassajara, there are rooms and cabins for rent and meals are included. For an oryoki experience, the San Francisco Zen Center on Page Street allows the public to join residents for breakfast in the zendo on Saturdays at 7:50am.

Tenzo Kyokun or Instructions for the Cook, written in 1275 by Dogen Zenji, the 13th century Soto Zen founder, is a great source of information. For something more accessible, call the San Francisco Zen Center at 415.863.3136 or go to sfzc.org.