Wheel of Life Rolls Over the Redskins

Washington, USA -- As a Redskins fan, I grieve for the team. But I also take a bit of pleasure in its recent woes. It's not that I don't want the team to win -- it's that losing makes a certain cosmic sense. 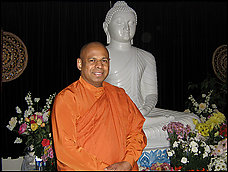 << Maharagama Dhammasiri says, "We are what we were; we will be what we are." (By John Kelly -- The Washington Post)

What I'm talking about is karma, or, as those of us raised in Western religious traditions might put it: What goes around comes around.

And what exactly has gone around? Well, if you're talking about Redskins owner Dan Snyder -- and I am -- that list would have to include:

Hiking ticket prices, building seats behind pillars at FedEx Field, replacing one strong radio signal with three crummy ones, renting Tom Cruise and basically trying to extract every last nickel from Redskins fans until they're left gasping like fish on a beach, too poor to slake their burning thirst with an overpriced beer.

Lose to the 0-5 Tennessee Titans? It's karma, man.

Or at least I thought it was. Just to be sure, I checked with M aharagama Dhammasiri, president of the Washington Buddhist Vihara on 16th Street NW. It turns out that karma is a complicated business.

Karma is cumulative. If Snyder is suffering now, it's not because he went through four head coaches in five years -- it's because of things he did in a previous life.

I asked Bhante Dhammasiri whether people in positions of power had special responsibilities when it came to karma. He said they did: "Sometimes when it is about a ruler, then this karma has interactions. It affects the other people, too."

Uh-oh. The people who watch? The fans might be responsible for a playoff bid slipping from the team's grasp ?

No, Bhante, I most certainly do not.

"When something happens to us in Buddhism, it teaches us to blame ourselves."

This may be why we'll never have a Buddhist president. Bhante Dhammasiri, 57, is originally from Sri Lanka but has lived in Washington for 20 years. I asked if he had ever been to a Redskins game.

"No," he said. "We are Buddhist monks. We don't go after the worldly pleasures." I think a Skins game this season would be all right, then. There's nothing pleasurable about witnessing our team's inability to convert a third down. The monk picked up on my proprietary language.

"The suffering comes because we think this is mine," he said. "This is my team. If  they lose, this means I lose. The idea of 'mine' gives you suffering. When you don't hold on to that, there is no suffering, because it is not mine. If it is mine it must behave as I want, but it never does."

Bhante Dhammasiri offered a memorable description of the effect of karma on our lives: "We are what we were; we will be what we are -- that is how we say this."

Yes, but what we were was a perennial Super Bowl contender. "Everything is impermanent," Bhante Dhammasiri said. "When we are happy, we think we are always happy. But, no -- happiness will come, and sadness."

He said that the wheel of life spins continuously, fluctuating between gain and loss, fame and infamy, happiness and suffering . . .

Suffering, yes, but as I said earlier, also experiencing a small amount of joy. I even have word for what I'm feeling: Snyderfreude. I'll probably pay for this in a future life.