Bangkok, Thailand -- All around me seekers in white robes with closed eyes and controlled breathing stretched toward Enlightenment. I -- cross-legged, rebellious and desperately wanting to scratch my nose -- wanted enlightenment on one question only: Why, oh why, had I signed up for a Buddhist meditation retreat? 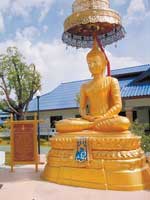 This was not my scene. I wasn't exactly sure what my scene was, but as a cynic in general and religious skeptic in particular, I felt reasonably certain it didn't include chanting and clothes that made me look like an extra from "One Flew Over the Cuckoo's Nest."

It began with the whimsically named Monk Chat, a program hosted by a Buddhist university in Chiang Mai, Thailand. At thrice-weekly discussion sessions, tourists visit with Buddhist monks. The tourists get answers to questions about Buddhism and life in the saffron robes, and the monks get to practice their English.

It was there I heard Phra Saneh Dhammavaro talk about meditation. Meditation is to the mind what a shower is to the body, he said. It calms the mind and teaches it to focus.

I was intrigued. Could I learn to control my ever-rioting thoughts? It seemed like a project worth tackling.

It wasn't until I arrived at the meditation center, with its blue roofs and golden Buddhas, that I realized the schedule included a 5 a.m. wake-up call. How did I miss that? More horrifying still, the monks announced we would keep silent for most of the overnight retreat.

"I think I may implode," I announced.

But life is suffering, according to Buddhist teaching, and nothing is permanent. This is the first of the Four Noble Truths revealed by the Buddha, also known as Siddhartha Gautama, a sixth-century Indian prince who reached Enlightenment at 35.

Subsequent truths state that suffering results from humans desiring what they don't have or clinging to the impermanent. Humans are freed from suffering when they stop grasping and clinging, and they do that by following the Eightfold Path for righteous living.

Twenty people hailing from multiple nations attended the retreat. We removed our shoes and entered the main meditation hall.

Phra Tippangorn explained we would learn sitting, walking and lying meditations. In each type practitioners strive to focus on their breathing, thinking of nothing beyond the abdomen's rise and fall.

We sat on square white mats laid in neat rows on the tile floor and tried to follow his instructions. A Buddha statue watched from the front of the room.

Sheila, an American who quit her job in publishing to travel southeast Asia for five months, said, "I felt I was in an ancient Chinese poem."

But despite the aesthetic beauty, meditation is difficult. Phra Saneh spoke often of "monkey mind." Consciousness, willful and capricious as a monkey, darts from thought to thought, resisting all attempts at control.

My mind felt like a tribe of monkeys, all scratching and picking each other for fleas. I thought: I wonder if the mosquito that just bit me is carrying malaria. Is that guy cute? No, just bad lighting. This might be worth it if it makes a decent column.

Day two was easier than day one, but only slightly. I understand now why meditation takes years of practice.

At the retreat's end, the monks said they hoped we each had learned something we could use in our daily lives. I think I did.

It feels good to quiet your mind sometimes. Even though mine spent most of the retreat in open revolt, the calming effort was not totally in vain. When I left my mind felt, if not showered, then at least swabbed down with a Wet Wipe.

Also, I realized I am utterly in love with the sound of my own voice, and I never want it silenced again.

Enlightenment isn't for everyone.

---------------------
Claire Bushey is a freelance journalist and Wilmington native who worked for The News Journal before leaving for her grand trek. To contact Bushey, go to www.clairebushey.com.