An Inner Journey in South Korea

Chooksersa, South Korea -- Chooksersa, a Buddhist Temple with one of the top Zen Masters in Korea in residence became my home for 3 months after leaving Europe. It was Christmas 2006 that my travel plan suddenly crystallized itself and created space in my life so that I could embark on an adventure. 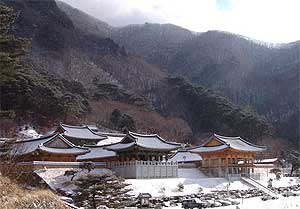 I left my job as Strategic Development Director for a Media Communications Agency across Europe, Middle East and Africa, left my home in Switzerland, let go of all my furniture and my belongings and said goodbye to friends and family for an unknown amount of time. I longed for adventure and to be alone but most of all, the deepest wish was that this journey would allow me to travel deeper within. South Korea would be the first stop followed by China and then Tibet. That was the plan anyway.

I arrived at the Chooksersa, along with the rain, in mid July. The temple itself is a hidden gem. Luckily for me I had met a Korean lady in the USA the year before who guided me there. My initial meeting with the Zen Master was remarkable, a mix of laughter, warmth and a feeling of connection.

During this meeting I was given instruction on Hwadu meditation, which has a strong tradition in Korean Buddhism and is known for its power, (when properly executed) to cut through thinking, clear the mind and lead the practitioner towards enlightenment.

Chooksersa temple itself is nestled within the Munsoo mountains in central south Korea. Surrounded by nature, the location itself takes you within its arms and caresses you into a meditative state. Each day the mists, the glint of the sun, the colouring of the leaves, the breeze or the rain whisper to those who listen a different story.

The day begins at 3:00am when you are called to wake-up by the haunting melody of a monk chanting with a “moktak” - a wooden percussion instrument. At 3.30am the big bell sounds, sending a morning call to the heart-minds of those in the Dharma Hall as well as those who live far below in the valley. Any sleepiness wafts away and is replaced by a energy, enlivening yet serene. During the morning service I was able to practise Hwadu by combining it with the daily 108 prostrations and breathing synchronized to movement.

During the day you are able to deepen your practise with a schedule that is created for you and your desired goals. It was my wish and also a requirement for practicing Hwadu that every moment becomes a moment of deep Hwadu. So when walking, eating, talking hwadu becomes your constant companion, your focus - ideally! Contributing to the running of the temple by helping in the kitchen, in the organic fields where fresh produce is grown or general chores offered more moments to deepen Hwadu but also a wonderful opportunity to experience life at the temple and get to know everyone living there. All meals are strictly vegetarian with Kimchi being a key feature bringing a truly authentic Korean experience to you as well as being nutritious for the body and heart-mind.

The monks, novices, permanent staff, volunteers and visitors were all curious, loving and generous. Language did not allow for a full verbal exchange but this in itself meant that a deeper language came into play as well as giving a certain solitude that aided my practise. Sweeping was one of my daily activities which brought a sense of sweeping away delusion, bit by bit. The total meditation focus during the day aided inner development and outer composure as well as fuelling the body with a fine energy.

Living in a culture different from your own offers you the chance to become aware of how much conditioning our minds have gone and are going through. You experience different social values, beliefs, attitudes and behaviour that makes you realize how tarnished our true nature has become in the process of living.

During the three months that I have been at Chooksersa I have noticed and others have commented on many changes within myself. The time has not always been easy, but when ever is an inner journey!! My body has undergone pain that has moved around and out as well as emotions making themselves heard and then releasing themselves. There was a certain re-assurance that came with the moving pain that my body was being cleansed on a deep level and that patterns were being released. At one point after five days of what appeared to be wisdom teeth pain, during my Hwadu focused prostrations, the recognition came to me “that a place exists where pain and suffering do not.” After a day the toothache cleared itself.

The evening service heralded the end of the day and another chance to deepen Hwadu by taking it to your dreams! Roll on 21:00 when I get to another opportunity to perfect this!

Anyone looking to deepen their practise, reveal more of their true nature may find Chooksersa, the Zen Master and all the people living there an inspiration and a living, breathing opportunity to focus on becoming all that you truly are.