Kuala Lumpur, Malaysia -- Vesak (Sinhalese) is the most holy time in the Buddhist calendar. In Indian Mahayana Buddhist traditions, the holiday is known by its Sanskrit equivalent, Vaisakha. Due to the leap year in the lunar calendar, Vesak is celebrated on both May 1 and 31 in 2007 (varies according to countries). 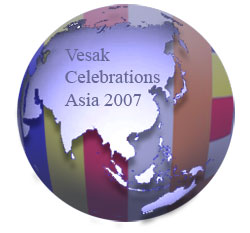 The word Vesak itself is the Sinhalese language word for the Pali variation, "Visakha". Visakha/Vaisakha is the name of the second month of the Indian calendar.

On Vesak Day, Buddhists all over the world commemorate events of significance to Buddhists of all traditions: The Birth, Enlightenment and the Passing Away of Gautama Buddha.

The exact date of Vesak is defined according to the astrological calendar, as the time of the full moon of Taurus, which corresponds to the birth, enlightenment (Nirvana) and the passing away (Parinirvana) of Gautama Buddha. According to the Chinese Lunar calendar, Vesak is usually celebrated on the full moon day of the fourth month.

For this year 2007 however, there are two full moon days in the month of May. Some countries have opted to celebrate on the first full moon (May 1) based on the resolution passed at Conference of the World Fellowship of Buddhists in 1950, whereas others have chosen to do so on the second full moon day (May 31), based on the traditional chinese calendar.

The decision to agree to celebrate Vesak as the Buddha’s birthday was formalized at the first Conference of the World Fellowship of Buddhists (W.F.B.) held in Sri Lanka in 1950, although festivals at this time in the Buddhist world are a centuries-old tradition.

The Resolution that was adopted at the World Conference reads as follows:

"That this Conference of the World Fellowship of Buddhists, while recording its appreciation of the viscous act of His Majesty, the Maharaja of Nepal in making the full-moon day of Vesak a Public Holiday in Nepal, earnestly requests the Heads of Governments of all countries in which large or small number of Buddhists are to be found, to take steps to make the full-moon day in the month of May a Public Holiday in honour of the Buddha, who is universally acclaimed as one of the greatest benefactors of Humanity."

Significance: The birth, enlightenment and passing away of Buddha

Date: First full moon of the Taurus, in May (common years) or June (leap years); Full moon on the fourth month of the Chinese lunar calendar

Where Vesak is celebrated in 2007 (brackett denotes what the public holiday is called in each respective country).