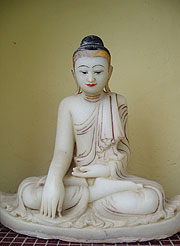 The Dhamma, or the teaching of the Buddha, is probably the most misunderstood among all other religions. The Buddha is also being likened to God and people have considered the Buddhist meditation as a hypnotic method to flee from the real world.

Buddhism, through the fourth noble truth is then closely linked to Buddhist meditation. It was transformed into a method or discipline of releasing people from the bondage of negative feelings and enhancing the nature of human life. This part of the Dhamma is known as the Noble Eightfold Path, which encompasses lessons that can influence the personal and social aspect of one’s life.

Some people view meditation, Buddhist meditation included, as a higher state of the pious life. That meditation is a step towards sainthood or being a holy person. Meditation is not an act of converting a sinner to have a deeper commitment to his religion. But it is just a good instrument to free oneself from the clutter that fills the mind in order to have a more serene life.

Since Buddhist meditation, like any other technique, is a personal experience which brings about self-fulfillment, it must be practiced according to one’s conviction and faith that enlightenment and bliss are attainable.