When suffering gets personal

London, UK -- On his return from Afghanistan, BBC world affairs editor John Simpson reveals how his attitude to covering stories about violence and suffering has changed. 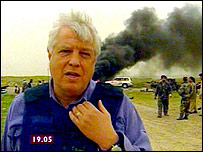 The explosion was just close by. The windows of my hotel billowed inwards like sails in a storm, and the walls shuddered.

A pause, then the alarms and sirens started up all round. My camera team and I got there quickly.

The stench of high explosive still hung over everything. The screaming had mostly stopped, and the rescue workers were dealing with the still-living and collecting up bits of bodies.

The police were starting to take out their frustration and anger on the photographers.

This was in Kabul just the other day but I have seen these things dozens and dozens of times during my career.

I have never been a great one for the kind of reporting that tells you how the journalist feels when something terrible happens.

It seems to me that we need reporters to be crisp and accurate and unexcitable, like ambulance crews. You certainly do not want an ambulance-man leaning over you and telling you how he feels about your injuries.

You just want him to say they will get you sorted out in no time flat.

But in Kabul the other day, and in Baghdad a couple of weeks earlier, I could not help noticing a change within myself.

I tried to find out dispassionately what had happened, of course, but when I looked at the bodies on their stretchers and the injured moaning in pain I felt a new kind of anger.

I knew immediately what it was all about.

Last year, after four miscarriages over a period of some years and virtually giving up all hope of having a baby, my wife and I had a son: a healthy, active, jolly little boy we have named Rafe (short for Ranulph).

With six billion people on earth, having a child is scarcely a rarity. But in our case it was so unexpected, so gratifying, that Rafe seems to us like a miracle.

I already had two daughters by my first marriage and have always, fortunately, been close to them: even more so, now that we all - weirdly - have children of the same sort of age.

But I confess that when my daughters were young I was not so aware of their uniqueness: everyone of my age seemed to have children then. I understand things better now.

And to see the miracle of other people's lives snuffed out wantonly on the streets of Baghdad or Kabul, or London for that matter, for some scarcely understood political or religious motive, seems to me nothing short of blasphemy.

I do not just loathe the stench of high explosive, I have come to loathe the attitudes of people who use high explosive for their own purposes: insurgents, terrorists, the intelligence services of a dozen countries, governments which target towns and cities and always have a ready apology when they kill the wrong people.

High explosive means hospitals with blood on the walls and corridors, and ordinary people like you and me, lying on the floor or on a gurney, ears ringing with the noise of the explosion, nostrils filled with the stench of it still.

The screams of others who are worse hurt than us. The fear and despair of the small number of doctors who have to deal with so many life-or-death cases, and know that they are condemning many of them to a slow, painful death.

"The armed struggle," said an African resistance song from the 1980s, "is an act of love." Try explaining that to the people lying in the hospital corridors.

The idea that some civilians are decent and righteous, while others deserve everything they get, or else should not have been in the way, seems to me to be intolerable.

I hope I never did think that attacks on civilians - any civilians - were justified but now I know for certain they are not.

Having been through the first and second Gulf Wars, and watched the wars in the former Yugoslavia and the Nato bombing of Belgrade in 1999, I do not really care any longer what the cause is. It is the civilians on the receiving-end who matter.

I am sorry if this sounds pious or sentimental. I do not mean it to be.

But I have finally understood something, through the blessing of having another child late on.

I realise this is terribly sententious: the moral equivalent of a motto from a Christmas cracker.

Still, just because something is obvious does not automatically mean it is totally lacking in value.

I am certainly not going to stop going to the kind of places where these things happen. But, at the grand old age of 62, my reaction to them has changed.

The fact is, my time reporting on violence and bombings in places like Baghdad and Kabul has shown me one essential thing: that the lives of the poor, the stupid, the old, the ugly, are no less precious to them and to the people around them, than the life of my little son Rafe is precious to me.