Intelligence, the ability to observe life 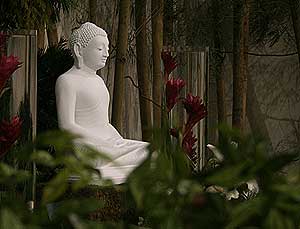 When they are happy and successful it probably wouldn’t occur to them. But if their partner leaves home, or they lose their job, get cancer, or something, then they say, “oh, what do I do now?”

So for many of us, the Buddha’s teaching begins with the experience of suffering. This is what we start contemplating. Later on we find we also, need to contemplate happiness. But people don’t begin by going to the Ajahn, saying, “oh venerable sir, I’m so happy! Help me fix this happiness.”

Usually we begin when life says, “This hurts.” Maybe it’s just bordom’ for me it was the contemplation of death. Maybe it’s alienation at work. In the West we have what’s called “the mid-life crisis.” Men around the age of forty-five fifty start to, think, “I’ve got it all,” or, “I haven’t got it all, so what?” “Big deal”.

Something awakens and we begin to question life. And since everybody experiences dukkha, in its gross and refind aspects, it’s beautiful that the teaching begins here. The Buddha says, “There is Dukkha.” No one can deny that. This is what the Buddhist teaching is based upon-actually observing these experiences we have - observing life.

Now the worldly way of operating with Dukkha is to try to get rid of it. Often we use our intelligence to try and maximize sukha and minimize dukkha. We are always trying to figure out how to make things more convenient.

This was true. I was a very speedy novice and would always try to avoid carrying water with a slow old bhikku in front. It drove me crazy. Sometimes I’d get stuck behind one of them, and I’d be pushing away.

So having to carry water with a monk I disliked was dukkha and, as Ajah Chah said, I would always try to figure out how to have things the way I wanted.

That’s using intelligence to try to maximize Sukha and minimize Dukkha. But of course even if we do get what we want, we still have dukkha, Because the pleasure of gratification is not permanent - it is anicca - Imagine eating something really delicious. In the beginning it would be pleasurable. But, if you had to eat that for four hours! It would be awful.

So what do we do with dukkha? The Buddhist teaching encourages us to use intelligence to really look at it. That’s why we put ourselves in a retreat situation like this with the eight precepts. We’re actually looking at dukkha rather than just trying to maximize sukha.

Monastic life is based on this also; We’re trapped in these robes. But then we have an incredible freedom to look at suffering, rather than just ignorantly trying to get rid of it. We all have responsibilities: family, job career and so and there are kinds of limitations, aren’t they? What do we do with them? Rather than resent these limitations and say.

“Oh if only it were different, I would be happy, we can consider: “Now this is a chance to understand.” We say “This is the way it is now, There is dukkha.” We actually go towards that dukkha; we make it conscious, bring it into mind.

We don’t have to create dukkha especially; there’s already enough suffering in this world. But the encouragement of the teachings is to actually feel the dukkha that we have in life.

The first noble truth of the Buddhist teaching is not saying, “Get this experience”. It says look at the experience of dukkha. We are not expected to mearly believe in Buddhism as a teaching, but to look at dukkha, without, judging. We are not saying I shouldn’t have dukkha. Nor are we just thinking about it. We’re actually feeling it, observing it. We’re bringing it to mind. So, there is dukkha.

The teaching then goes on to consider that dukkha has a cause and also that it has an end.

In the worldly way, we usually try to get what we want. all of us want Nibbana - right - even though we don’t know what it is. When we’re hungry, we go to the fridge and get something. Getting, getting, always getting something. But if we try to get enlightenment like that, it doesn’t work. If we could get enlightenment the same way as we get money, or get a car, it would be rather easy. But it’s more subtle than that.

It takes intelligence. I takes investigation.

So now we’re using intelligence not to maximize sukha and minimize dukkha, but to actually look at dukkha.

We’re using intelligence to consider things skilfully: “Why am I suffering?” So you see, we’re not dismissing thought; thought is a very important faculty. But if we can’t think clearly then it’s not really possible to use the Buddhist teachings. However, you don’t need a Ph.D. in Buddhism either.

Intelligence is the ability to observe life and to ask the right questions. We’re using thought to direct the mind in the right way. We’re observing and opening the mind to the situation. And it is in this openness, with the right questions, that we have vipassna practice: insight into the way we are.

The mind is taking the concepts of teaching, and channelling intelligence towards human experience. We’re opening, being attentive, and realizing the way things are. This investigation of the Four Noble Truths is the classic application of intelligence in Theravada Buddhism.

So simply observing dukkha is not trying to get an experience, is it? It is accepting responsibility for our dukkha - our inner conflict. We feel the inner conflict - “I am suffering.” And we ask “what is the cause?” The teaching says: dukkha begins and ends - it’s not permanent.

Suppose I’m feeling uncomfortable during the sitting, and I turn to that dukkha and ask: “What is the cause of this suffering?” “It’s because the body is uncomfortable,” comes the answer. So I decide to move.

But after five minutes, I find the body is uncomfortable again. So this time, I look at the feeling a little more closely. And I notice something more: “I don’t want discomfort. I want pleasant feeling.”

So I’ve seen that the cause of the problem isn’t the painful feeling; it’s the “not wanting” that particular feeling. “Wanting” is quite tricky stuff.

It comes in many forms. But we can always apply this same investigation: What is it I want now? The second Noble Truth - SAMUDAYA - says that the cause of suffering is attachment to wanting. It makes us feel that if we get what we want we’ll be fulfilled. “If I have this” or “If I become that...” or “If I get rid of this and don’t have that...” and that’s SAMSARA rolling on.

But the Buddha says that there is also a way out. There is an end to suffering. The end of suffering we call Nirodha - sensation - or Nibbana.

When I first read about Nibbana, I understood it to mean no greed, no hatred, and no delusion. So I thought if only I can get rid of all greed, hatred and delusion, then that would be Nibbana. It seemed that way. I tried and it didn’t work. I got more confused.

But as I continued to practise, I found that the cessation of suffering meant the ending of these things in their own time; they have their own energy. I couldn’t say to myself, “OK, tomorrow I’m not going to be greedy or afraid.”

That was a ridiculous idea. What we have to do is, to contain these energies until they die, until they cease. If I felt angry and were to act on it, may be I would kick someone in the shin.

Then they’d kick me back, and we’d have a fight. Or, I’d go back to my hut and meditate, and hate, myself. It goes on and on because I’ve reacted to it. If I’m either following it or trying to get rid of it, then it doesn’t cease. The fire doesn’t die.

The teaching of the Four Noble Truths says then: We have suffering - DUKKHA; there is a cause - SAMUDAYA; there is an end - NIRODHA; and a path to that end - MAGGA. This is such a practical teaching. In any situation of inner conflict we can take responsibility for what we’re feeling.

It is important that we actually apply these teachings. Ajahn Chah used to say, “Sometimes people who are very close to Buddhism are like ants that crawl around the outside of the mango. They never actually taste the juice. “Sometimes we hear the structure of the teachings and think we understand - “Its just a way of observing life,” we say.

But the teachings are not just an intellectual structure. They are saying that experience itself has a structure, which must be understood. So we’re not merely using intelligence to maximize sukha and minimize dukkha. We are using it to free the mind, to go beyond, to realize the unshakeable deliverance of the heart, to realise Nibbana.

We’re using intelligence for freedom not just frivolity; to liberate the mind, not just to be happy. We’re going beyond happiness and unhappiness. We’re not just trying to get another experience; it is a different attitude altogether.
------------

Transcribed from a talk given by Venerable Viradhammo during a ten-day retreat conducted in Bangkok for Thai lay people, in June 1988.