Kuala Lumpur, Malaysia -- It cannot be denied that the September 11 incident has become a gruesome reminder of the age of physical and mental deterioration which we live in. More so since the attacks on New York and Washington DC on that fateful day in 2001, hundreds of thousands more have perished in millitary campaigns in Afghanistan and Iraq, carried out purportedly to hunt down the terrorists. 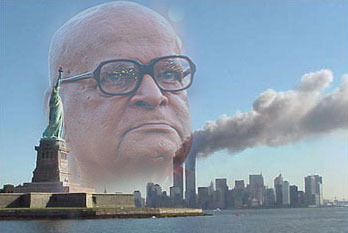 For the past six years, the world has moaned and groaned over mistakes committed by the US government in handling the situation. Today, we see the world divided more than ever along religious fissures. After more than four years in Iraq, milllitary intervention have caused more chaos and violence than ever before.

But are we closer to a solution?

Some time in October 2001, the late Chief Monk of Malaysia and Singapore, Ven. Dr K Sri Dhammananda (1919 - 2006) gave an interview published on the Buddhist News Network about the 9/11 attacks. Reprinted here is the gist of the interview.

We sincerely hope that readers - especially policy makers - will take time off to ponder on the timeless wisdom (some even call it prophetic views) of this monk and hopefully learn a thing or two from his advice.

The perpetrators (of the 9/11 attacks) are definitely heartless and mindless. What sort of mind have these people developed? How far have they come to develop such cruelty where so many innocent people have died for nothing?

No sane mind, religious or otherwise, would contemplate on such cruelty to kill so many innocent people. No true religion would sanction such barbaric actions. These people have no compassion, no virtues and takes advantage the name of a religion to justify their cruel acts.

The United States authorities have warned that they will leave no stones unturned in their quest to hunt down the terrorists. At this time, a certain religious group and figure have been named as suspects.

Just as we condemn the heartless and mindless actions of certain individuals, we must be mindful that any act of retribution and retaliation will in time invite more attacks.

The American authorities must learn to overcome this problem by taking all precaution to sift out the perpetrators without hurting other innocent people.
In the Dhammapada, the Buddha says 'Hatred will not be overcome with hatred (Dhammapada V.5). If we were to fight hatred with anger, there will be no end to this vicious cycle.

Still, military retaliation is not the goal. People always quote the Dhammapada saying (V.5), that 'Hatred will not cease with hatred.' But they always forget to cite the last line in that verse. It says 'This is the eternal law'.

Whether injustice or violence or war happening during the Buddha's time or in New York today, if we confront anger with anger, we will only bring more grief, and create new cycles of violence. This law is eternal.

In the confrontation with terrorism, millitary techniques may not solve the problem. Think, what did the terrorists use to create such cataclysmic destruction?

Forks and pen knives. And a great deal of planning. And patience. No amount of hi-tech surveillance could have detected what was going on in their mind. And that is why the first verse in the Dhammapada says, 'Mind is forerunner to both good and evil'.

Now tell me, what kind of millitary weapons can fight that?

So in the midst of the hi-tech environment which we have surrounded ourselves with, the single, most powerful destructive force was committed by sheer 'brain power'.

We have to seriously consider the use of psychological techniques in confronting this problem. War is created in the human mind. It is here that we have to find out its root cause.

I am concerned that a prolonged millitary strike will only widen 'a perceived war on Islam' (especially among the Muslims).

We have to be very, very careful here. There will be people who will drag religion into this conflict. It doesn't matter to them if this is right or wrong, but because of the depth and breadth of their hatred, they may inadvertantly deepen the enmity between two groups.

This will lead to more discriminations, hostilities and the creation of more evil forces. We must remember that religion has nothing to do with any 'holy war'.

These people only pollute the name of the religion. Already we are seeing people becoming more fearful, because more and more people are demonstrating in the streets.

And because of this, some of them (demonstrators) have been killed by their own law enforcers. And when all these are viewed all over the world through television, there can only be more hatred.

Whenever there was strife, people turn to God. But they always forget how 'the strife' first began. Here we are fighting one another. Then when we are hurt, we ask God for peace. It is we who must stop fighting.

It is a mistake to look at this 9/11 incident as a one off event. We must learn to see it as something which has happened at a point in time based upon a series of events.

For instance, on one hand you have a rich, developed and materially well endowed world. On the other hand, we have wretched poverty, filth and squalor. In time of peace, we get enamoured with material pettiness and immorality. And since everyone seems to be doing it, 'there is nothing wrong with these shameful and immoral behaviour'.

We have to look at peace in its totality. When there is widespread violence, it is a sign of times that we humans as the dominant species of this world have violated nature's universal law.

We need to ask ourselves how we have violated nature through various discrimination. Every creature - big or small - have their own contribution to the world. But just because we don't understand their role, and because they are a nuisance to us, we destroy and deprive them of their living being.

But what has 'universal law' and 'respect for nature' have to do with terrorism?

With our material pettiness and tolerance of immorality, we tend to lower the standard of religion for 'our own convenience, for our own comfort'.

Religion advises us to do things we don't like, while we like to do things religion disapproves. And so, little by little, day by day, we get accustomed to immoral subtleties until we become numb to it.

We continue to slumber in this make believe world of permanence and certainty until tragedy strikes, and we are rudely reminded that life indeed is impermanent and uncertain.

The lowering of religious standards is an apt barometer, gauging our levels of tolerance. Despite the heights human civilization have achieved, we easily forget why we are here.

That is why there is Jesus Christ and Buddha. They appear to remind us 'the existing Dharma' which we have forgotten. Other living beings follow the law of nature, whereas because we humans are 'clever', we tend to go against it.

That is why religion is needed to control us, to tame our raw instincts. No matter how clever we are, we cannot fight nature.

And perhaps this is the way of contronting terrorism, and the key is not to fight, but to understand. To reflect on the way we have been behaving - toward our fellow humans, toward our environment and more importantly, toward ourselves.

The seed of war and terror is planted in the mind. And to uproot this seed we need to first determine and will all effort to plant seeds of peace.

All of us, whether involved in the ongoing conflict or watching as bystanders, need to commit and open our eyes to this reality. To understand the grim situation the world is facing today, we all need to sit down calmly and to understand unbiasedly the root cause of the problems.

Failing to do so will mean the human species taking the downward spiral to armageddon.