A message for everyone in scrolls

Albany, NY (USA) -- Our lives are chock filled with stuff -- material objects, responsibilities, obligations, the minutiae of daily living. We often think that if only we could step back and take a few moments to get a handle on this hectic life, everything would be much better. There seems so much to do in so little time. 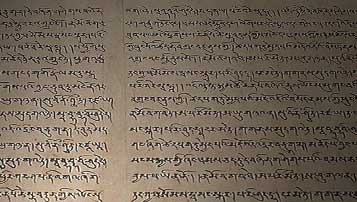 In Buddhist terms this is referred to as dukkha, often translated as suffering, perhaps more accurately discontentedness. Buddhism does not provide more hours in the day or relieve people of their responsibilities. It does provide many methods for the attainment of awakening, which at the most elemental level is a re-formation of our lives and our point of view toward this unsatisfactory life. By this and other transformations, awakening is liberation from dukkha.

Buddhism is often called the path with no goal because there is nothing to be achieved. It is the process of transformation that is important. A central premise of the Buddhist path is the Three Treasures: 1. the Buddha, not a person, but the awakening that resides in all people to be unveiled through practice and devotion; 2. Dharma, teachings that guide us on the path and life; and 3. Sangha, the Buddhist community that supports and nourishes us. The Buddhist Path is a life lived with compassion and wisdom through the use of skillful means, not a blissful moment.

Awakening is to arise from a life of discontentedness to a life of purpose and realization. Most people associate this 2,500-year-old religious tradition with meditation, which is one of many practices employed to enhance life and elevate consciousness beyond the mundane. However, there are many layers to Buddhism, and meditation is not the most fundamental. The real practice of Buddhism is compassion through wisdom. Other methods include chanting, devotion, study, ascetic and esoteric practices, mindfulness and service to others.

Shodo combines artistry and spiritual expression of Buddhist masters. It is intended to cultivate awakening in the observer as well as the calligrapher.

On Saturday from 1 to 5 p.m., 37 scrolls will be exhibited at the Jiunzan Tendai-ji, the main temple of the Tendai Buddhist Institute. The subjects of these pieces, assembled for the occasion by the Japanese Tendai Calligraphy Association, derive from Buddhist philosophy, teachings, rituals and aphorisms.

The setting, at the institute's 140 acres in the Berkshires foothills, adds to the artistry of the scrolls and the sacred nature of shodo. All are welcome to attend the opening of the exhibit, or come any Saturday or Sunday from 1 to 4 p.m. through Nov. 4 to spend a few peaceful moments experiencing shodo.

Founded in 1995, the institute in East Chatham is the head temple of Japanese Tendai Buddhism in North America. It is dedicated to presenting Buddhist teachings, practices and lifestyle. It is open to all levels of Buddhist practice and is the only ordination training center for Tendai monks (male and female) outside of Japan.

Established in 804 C.E. by Saicho, Tendai Buddhism is one of the most important sects of Japanese Buddhism. Its origins are firmly rooted in the dharma taught by Shakyamuni Buddha, the historical figure. Its origins also lie in the Mahayana school of Buddhism and China's T'ien-t'ai school, which was founded by Zhygi in the sixth century C.E. Meanwhile, Tendai Buddhism gave rise to other important schools of Japanese Buddhism, including Jodo (Pure Land), Jodo Shin-shu (New Pure Land), Soto Zen, Rinzai Zen and Nichren.