Bangkok, Thailand -- Most of us have some aspect of our personality or our life that we wish to change. We want to lose weight, quit smoking, save money, or develop the discipline to meditate daily and heal our minds. Some people wish to become less materialistic and to appreciate the simple things in life. Our biggest holidays, Christmas and Thanks Giving (and Chanuka) are good opportunities to overeat, overindulge, overspend, over-consume, and overdo. 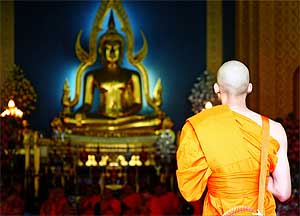 What most westerners need is a prolonged fast, a quiet return to the simple life and an escape from the modern world of consumer culture. The Buddhists have such a holiday.

Toward the end of July, travelers may have noticed inordinate numbers of monks crowding the bus stations of Cambodia’s and Thailand.

Most of the monks were given special leave to visit their families, in preparation to the Buddhist lent, a three month celebration of faith, when they would not be permitted to leave the monastery.

Anyone who has tried doing business in South East Asia during rainy season, you will find that things slow down immensely. Actually, the slow down, at least in part, is based on the observance of the Buddhist holiday, Vassa (called Phansa in Thailand), the Buddhist lent, which is primarily practiced in Cambodia, Thailand, Lao, and Burma. The Buddhist lent is often loosely referred to as the “rain retreat.” The period of deep religious dedication begins on the first day of the waning moon of the eighth lunar month.

The word Vassa is actually an old Pali word which means rain. The holiday is divided into two parts. The first part, for the entering of the rainy season, is called “Choul Phrah Vassaanother. The second part, for the exit of the rainy season, is called “Cheanh Phrah Vassa”. While lay people are free to chose what level of discipline they wish to exert in following the rules of the lent. For monks, however, strict observance is mandatory.

Non-monks often use this Lenten period to renew their spiritual practices and give up some of their luxuries, such as meat, alcohol, or smoking.

During the lent period, normally from August to October (depending on lunar months), monks aren't allowed to sleep outside their temple, neither are they permitted to wear “regular clothes.” The tradition stems from a story abut how Buddha remained in the temple during rainy season to prevent stepping on any insects of sprouting seeds. They are, however, permitted to go out during the day.

Monks use this period of restricted movement to do intensive study, meditation, and prayer. This is also a time when they would teach the sacred scriptures to younger monks.

Buddhist lent is the most important religious holiday for monks, novices, and lay people. Monks stop wandering and stay on the temple grounds. Novices benefit because they receive additional education. Laypeople stop doing evil and cut back on bad habits. Some people take this opportunity to purify themselves and start a new life.

A few days before the Buddhist Lent, Cambodian people buy pairs of big candles decorated with dragons or flowers. One candle is for the buyer and one to get a husband or wife in the next life. The day before Buddhist Lent, the 15th day of the dark moon, commemorates the first sermon of Buddha to his first five disciples. Crowds of people gather in the temple in order to listen to the Dharma. In some parts of Cambodia there are grand candle processions, with the people walking three times around the pagoda with the lighted candles.

And thus begins a three month period of abstinence, sobriety, and meditation.

If you really want to understand the Southeast Asian culture, and if you want to stop gambling or drinking shoe polish, Buddhist Lent could be like a low-cost spa treatment to get your life back on track.

------------------------
Antonio Graceffo is an adventure and martial arts author living in Asia. He is a professional fighter and the author of four books available on www.amazon.com.