Constructive living is all about celebrating the here and now. 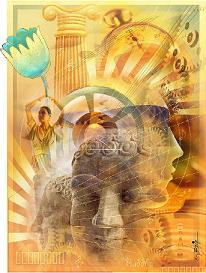 New Delhi, India -- A man was being chased by a tiger up a mountain. He reached the top of the mountain and realised he could flee no more; he therefore decided to jump off the mountain which meant sure death. Falling off the mountain, he felt, was better than being eaten by a tiger. As he began falling he noticed a tree, weak and slender but nevertheless a tree that he could hold on to. He grabbed the branches but soon the tree began to give way. He now realised that death was imminent. Suddenly he noticed a fresh strawberry growing beside the tree. His impulse allowed him to pluck the strawberry. As he ate the strawberry he said to himself, ‘What a wonderful fruit!’

Constructive living, also termed creative living, celebrates the present, living mindfully and in awareness of what is happening. Any form of meditation which focuses on breath will bear this out.

In Vipassana meditation, otherwise called ‘insight meditation’, you are asked to focus on breath. Breath, one realises, has no past or future. One cannot say, “Yesterday this was how I breathed and tomorrow this is how I will breathe”.

This realisation liberates, as it allows one to let go and increases one’s sense of freedom. Thus, as one lives in the moment one becomes aware of small events and recognises how these events provide a context for all of one’s experiences.

Viktor Frankl, a psychiatrist who spent several years in a concentration camp, has advocated in his now acclaimed ‘logo therapy’ that man searches for meaning. A healthy person therefore does not go in pursuit of mere self but for a meaning to supply and put purpose to one’s existence. Such persons continuously face the challenge of finding meaning to fulfil, and this continuing struggle provides zest and excitement.

Recognising that we create our reality helps free one from the burden of believing one is a victim of circumstances; what is popularly termed ‘destiny.’

A little boy once went with his mother to a pet shop. He was keen to buy a dog. He looked around the store and found a pup that was apparently disabled as she was limping. He went to the storeowner and asked to buy the pup. The owner said, “I will give it to you for free, as I am going to put her to sleep for she is lame.” The boy asked, “If I buy a healthy pup how much would it cost?” The owner said, “Fifty rupees.” The boy instantly handed the money to the owner and picked up the disabled pup. The shocked owner laughed at the boy, saying, “You are a fool and you do not understand money!” The boy lifted his pant and showed his own leg which was a stump and asked the owner, “Will I be disowned because I am lame?”

The boy brought to the experience the value of compassion. Truly a creative value.

A rich man walking down a road found a beggar seeking alms. The beggar was blind and the man noticed that in his hand was a gleaming diamond. Obviously the beggar had no clue of what he held. The rich man tempted by the gleaming stone approached the beggar and told him, “You have a stone that you cannot use. I will give you five rupees. Will you give me the stone?” The beggar responded, “Sir, please take the stone and you do not have to give me anything in return. This is perhaps the first time in my life that I am giving without asking, please take it!” The rich man broke into tears and told the beggar, “Friend, I do not want the stone, but do give me that quality that you have which is willingness to give without question.”

The rich man had just witnessed an experiential value.

A champion handball player in the UK who had lost an arm during a game was now retired and seated in a restaurant. A young man approached him and introduced himself as the current champion. The old man was solicitous and welcomed the young man to sit beside him. The young man asked the old champion, “Sir, I have one question for you!” “What is it, friend?” said the champion. “Sir, you have only one hand, you must have had a problem playing handball.” The old man laughed and responded, “Son, I did not have a problem, but you do. When the ball was thrown at me I did not have to choose which hand to use, but you have to.”

Such is the attitude that one can bring to one’s life and work.

Therefore, in recognising that we have the choice of creating our reality by approaching life sensibly, we feel less greedy. Boundaries begin to melt and the distance between oneself and others diminishes. One suddenly feels more adjusted.

One of the powerful teachings in Buddhism is that as long as you are wishing for things to change, you never will. As long as you want yourself to get better, you won’t. As long as you have an orientation to the future, you can never just relax into what you already have or already are. If there is some sense of wanting to change yourself, then it comes from a place of not feeling that you are good enough. It comes from a place of aggression towards yourself, dislike for your present mind, speech or body. There is something about yourself you feel is not good enough.

Buddhism says Buddhahood is not something you aspire to. You are inherently Buddha which means that you accept who you are and connect with the intelligence you already have.

Wise men often ask, ‘Can you explain in logical terms why one is born at a particular moment.’ The answer is most often ‘no’. Wise men again ask, ‘Can you explain logically why one dies at a particular moment.’ The answer again is ‘no’. Wise men now say, ‘When you cannot logically explain the beginning of birth or the closure of life, then what is this logic that you are trying to discover for living? Why do you seek for fruition and closure, why don’t you just live in the moment?’

Life is a movement of horizontalism, which means that in order for you and I to talk and communicate, we must share the same level of existence. We are like islands joined together underwater, we can look at one another and know that we are sharing the same universe.

In this act of sharing we experience profound equality. Thus, recognising the truth that all of us march to the same tune allows for one to enter into an unconditional relationship not just with another but with oneself and, in so being, one becomes accepting of who one is.

The giant Goliath was attempting to beat the dwarf David. David pleaded and asked the giant to allow him to explain. The giant was impatient but, being sensible, agreed to let David explain. David quickly drew a line between himself and the giant, and jumped on to the giant’s side. He then told the giant, “We are now on the same side, why do you want to beat me?”

The truth is all humankind is on the same side.

Thus, when we begin to practise the truth, which is waiting for each of us to rediscover, we become healthy and then… we are free to choose our course of action.